I am deeply ambivalent about running.

On the one hand, while I'm doing it, every fiber of my being is begging me to stop.  I'm short of breath, sweating, my legs ache.  It seems like I'll never be done, that this misery will go on forever.  My brain shouts at me with every step, demanding that I stop, asking me why the hell I'm doing this in the first place.  Voluntarily.  Without even a lion chasing me, or something, some circumstance that would make this reasonable behavior. 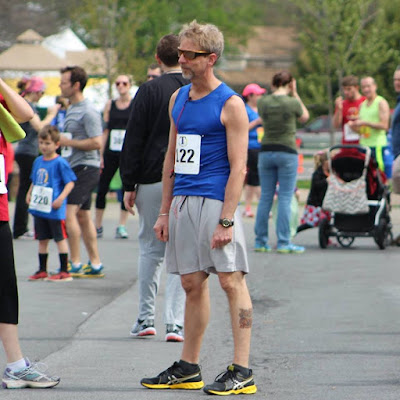 Me before the start of a race, experiencing deep ambivalence

However, a part of me craves it.  When I'm driving somewhere and I pass a guy out running, I immediately think, "I wish I was doing that right now."  I always feel better afterwards -- with the possible exception of the Montezuma 5K two years ago, when it was a good 95 F, and about 587% relative humidity.  But even then, when I got home -- and immediately went into my back yard, stripped, and jumped into my pond -- I had to admit I was glad I did it.

And crossing the finish line is itself a huge endorphin rush.  I'm a mediocre runner at best and will never be in contention for the top three slots, or even the top fifty, but when I finish -- usually in the middle of the pack -- I feel like a million bucks.  All the pain and misery are forgotten.  In fact, I have sometimes gone home from races, gotten online, and signed up for several more. 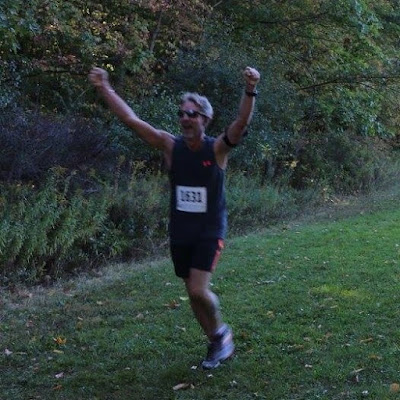 The best part, though, is the racing community.  It's about as far from a cutthroat competition as you can get.  I'd guess the first four or five to cross are probably pushing to get ahead, but everyone else?  I can say that people at races are some of the friendliest folks around.  They honestly want everyone to do his/her best.  I've had people slow down, even turn around, when I'm lagging behind, and ask me if I was okay.  I've done the same for other runners.  The folks who have already finished cheer on the ones who follow them, urging them on to put on a final burst of speed as they approach the finish line, to "finish strong."  Afterwards, the question is never "what was your time?" or "what place did you finish in?", it's "did you have a good race?"

Most memorable was last year's Ithaca Twilight Race -- run on the solstice, when it's still light at nine PM.  It was a muggy evening, and after I finished, I got a bottle of water, plunked down onto the grass, and pulled my sweaty t-shirt off.  Shortly afterwards, a cute kid, maybe ten years old, came up to me with a big grin on his face, and gave me a double high-five.

Turns out I'm not alone in feeling this way.  New research in The Journal of Positive Psychology, just released last week and authored by Marzena Cypryańska and John Nezlek, looked at the attitudes of 404 recreational runners, and found something interesting -- but hardly surprising given my experience.  Not only were runners happier following a race, the high lasted throughout the following week.  They scored higher on just about every measure of well-being, including experiencing more positive emotions, having higher self-esteem and confidence, feeling more satisfied with life, and that their life had more meaning.

What's interesting is that the length of the race -- they looked at 5Ks all the way up to full marathons -- didn't matter.  Neither did what position the runner finished in.  The mere act of participating in a competitive run with a group of supportive people gave test subjects a boost that was remarkably long-lasting.

One thing that did seem to matter was how runners themselves felt about their performance.  If someone thought (s)he had "run well," the boost was significantly higher than if (s)he "didn't have a good race."  Again, it didn't matter where in the standings runners fell; a runner could come in 750th out of 1000, and if she felt like she'd run her best and was satisfied with the outcome, it was just as much of an endorphin rush as the woman who placed in the top fifty -- and a great deal more than the guy who came in #10 but felt like he hadn't done as well as he wanted.

I can vouch for this, too.  Last year, I ran the Trumansburg May Day 5K, and wasn't happy with my performance -- my time was high, my energy level low, and I ended up feeling kind of crummy.  I didn't do terribly -- I beat my time in the aforementioned Montezuma Sauna Race by a good three minutes -- but I just felt as if I hadn't met the standard I was shooting for.

And that cast a bit of gloom over running in general for quite some time afterward.

So the Cypryańska and Nezlek research shows a number of things -- it's important to participate in groups, critical to support each other, and perhaps most of all, necessary to be proud, not disparaging, of your own accomplishment.  After all, wherever you finished, you're still ahead of the people who are sitting on the sidelines.

Now, y'all'll have to excuse me.  I've got some races to sign up for.