Talking to your clothes

There's no woo-woo belief that is so silly that someone can't tinker with it and make it a whole lot sillier.

So, let's start with psychometry, the idea that people leave "psychic traces" on objects that they handle.  Supposedly, these traces are especially strong if the object was handled by someone in an elevated emotional state.  And the idea is that for psychically-sensitive people (whatever that means), those traces can be detected.

Okay, so not so different than the other kinds of psychic woo-woo -- clairvoyance, telepathy, precognitive dreams, and so forth.  But thanks to one of my sharp-eyed Critical Thinking students, we have the story of a woman named Roxanne Usleman, whose hobby is going to thrift stores so she can handle clothing and find out about the people who owned them.

Usleman is featured in a video wherein she goes to Marmalade Vintage Clothing Store and leads the shop owner around making commentary.  Here is how she describes what she does:


[Clothes] communicate completely different than we do on the Earth, kind of a different language. I work, like, as a translator, basically, as the information comes through I translate it into an Earth form, a three dimension form, where mortal beings can understand it... When I was woke up in the middle of the night, the clothes are, like, speaking, and they have a history about them, a need to communicate something that happened.

My own clothes don't seem to communicate anything much to me, except for occasionally the important messages "WASH ME" and "Do you really think that shirt matches these pants?  Seriously?" and "Don't you know how to use an iron?"  But maybe I just don't speak the "language."  Be that as it may, Usleman then goes on to feel up various pieces of clothing, and finds a dress about which she says the following:


Whoever had owned this before, when she had passed away this dress was near her when she had passed away. So there's something she needs to talk about, it's as if the end of her life did not end in a positive way. It was very sudden. Whoever had gotten the dress after, and wore it, immediately gave it away because they didn't want the energy in it.

The shopkeeper then chimes in:


That is true. I don't know who is the owner, but somebody bought this as a gift for my sister. And she didn't ever wear it, she didn't want it, so she gave it to me.

And Usleman is just tickled pink about this, and squeaks, and says, "Ooh, so we have a verification!"

Because of course it couldn't be that the sister didn't like it because it's a butt-ugly dress. No, it has to be the "energies."

Then Usleman says that last night she got a communiqué from a "Laura" and she wanders around the shop to find something that "Laura" owned.  And she finds yet another butt-ugly item, this time a bracelet shaped like a snake with red eyes, and says that this was once owned by "Laura."  Metal, Usleman explains, holds the "energy" of the first person who owned it even better than cloth does.  "Whoever buys this bracelet," Usleman says, "it will be unimaginable, the power.  It will bring them a lot of luck."


Fur, on the other hand, is more difficult, because "the animal is so strong in the fur that it's difficult to connect to the human."  Because of this, you don't pick a fur, the fur picks you.  If it's the wrong person for the fur, "the fur repels them, they'll pass right by it, they may not even see it." 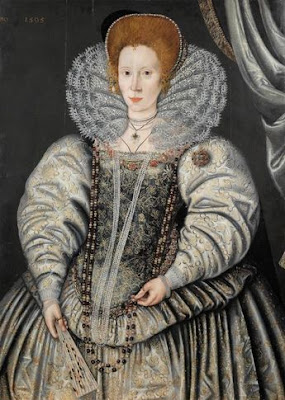 I wonder what these clothes are saying?  Probably, "Frills are way more important than comfort."  [Image is in the Public Domain]

What gets me about this, more than Usleman's dog-and-pony show (because that is pretty clearly all about publicity, and ultimately, money) is why anyone with an IQ that exceeds today's high temperature in Labrador would fall for it.  It's not, as the student who found it pointed out, like the clothing is going to speak up and say, "Um, excuse me.  Actually the woman who owned me was named Muriel, and she's still alive, and donated me to this shop because I am truly hideous."  Psychometry, especially of this sort, falls outside of the realm of the even potentially verifiable, given that clothing in second-hand shops doesn't usually come with a printed ownership history attached.

You really should, however, watch the video, which is under three minutes long.  Usleman's delivery is somewhere between hilarious and grating; she has a Valley-Girl-style flip upwards at the end of each sentence, as if she was asking a question when she's not?  Every single time?  You know?  She also uses the word "like" a lot, which definitely adds to the overall effect.  Nevertheless, after doing a little research, I found out that she's apparently a hugely popular psychic, with a thriving business doing psychic readings.  On the flip side, however, she was one of the psychics whose predictions were analyzed by astro/geophysicist and pseudoscience debunker Stuart Robbins, and he found, unsurprisingly, that "these 'professionals' are NOT capable of telling the future any better than you or I, and some of them are in fact far worse."

Yet people still give her money for her "psychic abilities."  Which, frankly, baffles me.

So, that's today's contribution from the world of woo-woo.  I'd like to give a shout-out to the student who sent me Usleman's video; this young lady has a truly fine skeptical mind, of the kind that is a pleasure to teach.  As for me, it's time to go get ready for work, or at least that's what my clothes are communicating with me.  Right now they're saying, "Hey!  You!  You can't just sit around in your bathrobe all day, messing about on the computer!  Get your lazy ass in gear!  But please take a shower before you put us on, okay?  Yeah.  Thanks."

Damn snarky clothes.  Maybe I'll switch to wearing fur, if I can find one that wants me.