Warming up for disaster

In today's installment of Ruminations About Science That Should Scare The Piss Out Of You, we have: the Paleocene-Eocene Thermal Maximum.

This event, that occurred about 55 million years ago, is the peak of a slow climb in average global temperature that began around the time of the Cretaceous Extinction (the one the knocked out the dinosaurs), and ended with the Earth's temperature a good seven degrees warmer than they started (and an estimated eight degrees warmer than it is now).

The result was catastrophic, especially for some life forms that aren't exactly charismatic megafauna -- the foraminifera.  These are protists, related to amoebas, that are part of the "zooplankton" -- small, free-floating organisms that form a lot of the underpinning of the oceanic food web.  During the Paleocene-Eocene Thermal Maximum, over a third of them went extinct, with predictable results for the rest of the life in the oceans.  The thought is that the extinction wasn't just because of the heat, but because the excess carbon dioxide in the atmosphere caused oceanic acidification, a drop in the pH of ocean water that would have caused any organisms with shells made of calcium carbonate -- like many foraminifera -- simply to dissolve.

What kicked off the warming is uncertain, and at first it was relatively slow.  But new research out of Pennsylvania State University, published last week in Nature - Geoscience, suggests that once it began, it triggered some positive feedback cycles that intensified the effect.  "What we found in records were signatures of carbon transport that indicated there were massive erosion regimes occurring on land," co-author Shelby Lyons said.  "Carbon was locked on land and during the PETM it was moved and reburied.  We were interested in seeing how much carbon dioxide that could release...  We found evidence for a feedback that occurs with rapid warming that can release even more carbon dioxide into the atmosphere."

Meaning that here in upstate New York, I'd have beachfront property. 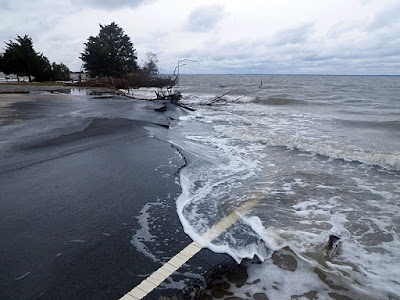 Coastline loss on Assateague Island, Maryland/Virginia [Image is in the Public Domain, courtesy of the National Park Service]

The pertinence of this research to today's fossil-fuel-happy society is obvious.  We're sending carbon into the atmosphere that has been sequestered underground for 250 million years, triggering warming at a phenomenal rate.  It's not that there haven't been thermal ups and downs for all of Earth's history; but the speed with which this is happening is unprecedented.

Oh, and I didn't tell you the scariest part.  The research from Penn State found that once that maximum had been reached, 55 million years ago, it took a hundred thousand years for the planet to recover.  "One lesson we can learn from this research is that carbon is not stored very well on land when the climate gets wet and hot," study co-author Katherine Freeman said.  "Today, we're pushing the system out of equilibrium and it's not going to snap back, even when we start reducing carbon dioxide emissions."

Of course, I doubt this is going to have any effect, given that the current administration here in the United States is bound and determined to ignore scientific research and hard evidence in favor of hand-waving wishful thinking and short-term expediency.  You'd think that terrifying people into recognizing the peril for the long-term habitability of the Earth would impel them to act, for their children's and grandchildren's sakes if not for people here and now.

But no.  I guess being in the pockets of the fossil fuel industry has that effect.

So that's today's research about the past that has scarier-than-hell ramifications for the present.  Me, I'm going to keep writing about this stuff in the hope that someone influential is listening.  Because if not, I'm afraid we're in for a very hot time.