Why the short face?

Given my background in genetics, it's mildly amusing to me that there are people who think humans are somehow qualitatively different than all other animals.

Or it would be, if it weren't for the fact that many of these people are trying to drive their views into science curricula.

We had one more nail in the coffin of the idea that humans can claim to be a separate type of creature from every other species of animal just last week, when a paper was published in Science showing that the genetic error that causes Robinow syndrome -- a rare disorder in which affected individuals show stunting of growth, bowed legs, large, widely-spaced eyes, flat, rounded faces, vertebral malformation, and shortened lifespan -- is the same as the genetic error that causes nearly identical symptoms in bulldogs and Boston terriers.

The brachycephalic (short-faced) dog breeds are notorious for having health problems.  English bulldogs have an average lifespan of only eleven years, and are plagued with issues like skin problems and heart abnormalities.  My beloved rescue dog Grendel, who died last year of kidney failure at age eleven, was not only brachycephalic but the same basic shape as a fireplug, so I'm afraid he inherited his sadly truncated lifespan from his flat-faced ancestors. 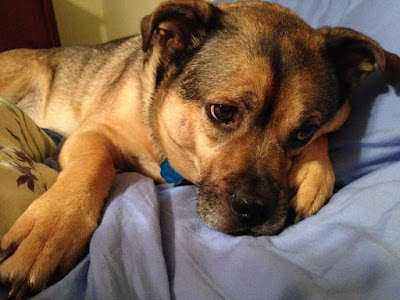 A team of geneticists at the University of California-Davis published a paper called, "Whole Genome Variant Association Across 100 Dogs Identifies a Frameshift Mutation in DISHEVELLED 2 Which Contributes to Robinow-like Syndrome in Bulldogs and Related Screw Tail Dog Breeds," where we learn that errors in DISHEVELLED2 (DVL2), a homeotic (developmental) gene found in all mammalian species studied, show essentially the same effects whether they occurs in dogs or humans.

Team member Sara Konopelski discovered that DVL2 is essential for a developmental pathway that influences the growth of the fetal skeleton and nervous system.  From there, the researchers looked at individuals (both human and canine) who have malfunctions in this gene.  Mutations in DVL2 -- common in dogs, rare in humans -- create a roadblock in that pathway, and trigger a set of distinct changes in body structure.

The interesting thing is that this mutation is considered deleterious in humans (and is, honestly, deleterious in dogs as well), but because of artificial selection, we now have breeds in which 100% have DVL2 errors.  The authors write:


Some dog breeds are characterized by extreme morphological differences from their ancestor, the wolf.  One group of three breeds (Bulldog, French Bulldog and Boston Terrier) is characterized by a wide head, short muzzle, widely spaced eyes, small size and abnormalities of the vertebral bones of the back and tail.  These breeds are referred to as the screw tail breeds since the characteristic that is unique and easy to see in these breeds is their shortened and kinked tails.  These breeds have become increasingly popular as pet dogs, although they have health issues associated with their morphology.  We analyzed the genome sequences of 100 dogs, including 10 screw tail dogs, and identified all the genetic differences between those dogs.  We then compared these differences to identify changes in the DNA sequences associated with screw tail.  The mutation and the affected gene identified are very similar to the types of mutations that have been shown to be responsible for a rare human disorder with similar clinical abnormalities, called Robinow syndrome.  We demonstrate that the dog mutation makes an altered protein that affects an important cell-cell communication system crucial for tissue development.

So unsurprisingly, our kinship with the rest of Kingdom Animalia can be demonstrated not only by the overlap between the genomes themselves -- after all, you share 84% of your DNA with your dog -- but the fact that changes in the code affect different species the same way.  This is a little hard to explain if you don't buy common ancestry.  But hell, if you haven't accepted common ancestry for a plethora of other reasons, it's probably a forlorn hope that this would convince you.