I don't know if it's reassuring or distressing for me to find out that here in the United States we don't own a monopoly on anti-scientific whackjobs.

I mean, we do have a good many of 'em, there's no doubt of that.  Just counting the young-Earth creationists and the climate change deniers, we're pretty well stocked.  Add to that the people who believe in astrology, phone-in psychics, homeopathy, conspiracy theories, and the latest heinous lies uttered by our alleged commander-in-chief, and you've got a sizable fraction of Americans for whom logic and evidence are not exactly paramount.

So it's easy for me to slip into despair about my countrymen, and accounts for the mixed feelings I had upon reading about last month's annual meeting of the Indian Science Congress, meant to be a gathering of the finest scientific minds across India, where attendees were told a number of eye-opening claims, to wit:
If at any point you were expecting me to say, "Okay, I made the last one up," sorry to disappoint you -- these were all genuine claims made, by alleged scientists, at the meeting. 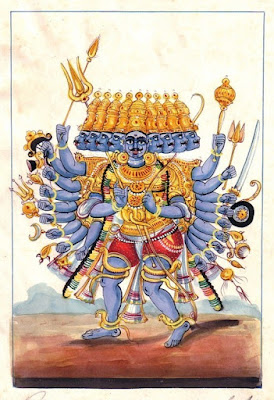 Ravana, inventor of the airplane [Image is in the Public Domain]

And in case I haven't made the point strenuously enough; this was a meeting of, by, and for professional scientists.  To be fair, a lot of the attendees were up in arms that their gathering had been, for all intents and purposes, hijacked by a bunch of superstitious loons.  "We never dreamed that some of them would spout such irrational ideas," zoologist Ashok Saxena said, in an interview with NPR after the fiasco occurred.  "They were invited to speak based on their science credentials."

"It makes me uncomfortable when pseudoscience statements are made from a platform like the Indian Science Congress," said Kushagra Agrawal, senior lecturer in chemical engineering at the Indian Institute of Technology, Guwahati.  "The idea of such events is to show the world India's scientific prowess, but it makes me wonder what impression those Nobel laureates and other foreign scientist dignitaries will take from our country."

Indeed.  It's hard to see how any serious scientist wouldn't be appalled at this -- and, very likely, take his contributions to the field elsewhere rather than presenting at an event that had been turned into a Three-Ring-Circus of Superstitious Nonsense.  But it remains to be seen how they could have prevented it.  Previously, there was no requirement by the oversight agency that presenting scientists submit their speeches for review prior to the event; organizers trusted that credentials would assure relevance.

Fortunately, they're not going to make that mistake again.  "We've never censored scientists before," said Indian Science Congress General Secretary Premendu Mathur.  "We expected them to motivate young minds and speak responsibly, but now, each session will have to be closely monitored.  We won't allow others to use our platform for their selfish reasons anymore."

I wish Mathur luck, and certain agree with his aims, but I would like to warn him that the one thing superstitious nutjobs don't do well is shut the hell up.  If you deny them one venue, they'll find another bigger and better one.  Anyone who has the balls to get up in front of a bunch of scientists and say that airplanes were invented by a ten-headed demon god is not going to be dissuaded by a little inconvenience like submitting his speech ahead of time.

So that's today's dip in the deep end, which to my fellow Americans should either be reassuring or not, depending on how you choose to look at it.  Of course, there's a part of me that hopes there is a flaw in the Theory of Relativity, and that the speed of light isn't the universal cosmic speed limit.  Because I really want warp drive to be a thing.  But given that these same people are claiming that dinosaurs were a special creation of the gods, I'm thinking it unlikely that if it is true, these guys will be the ones who will discover it.

Posted by Gordon Bonnet at 4:33 AM