Having a rather morbid fascination with things that are big and scary and dangerous and can kill you, I've dealt more than once with topics like mass extinctions and asteroid collisions and supervolcanoes.  So naturally, when there was a piece of recent research on all three at the same time, I felt obliged to write a post about it.

The paper, published last week in Science, was written by a team of scientists from the University of California - Berkeley (Courtney J. Sprain, Paul R. Renne, Loÿc Vanderkluysen, Kanchan Pande, Stephen Self, and Tushar Mittal), is called "The Eruptive Tempo of Deccan Volcanism in Relation to the Cretaceous-Paleogene Boundary."  In it, they examine one of the biggest volcanic eruptions in Earth's history -- the Deccan Traps -- which seem to have occurred right around the time of the Cretaceous Extinction, 66 million years ago. 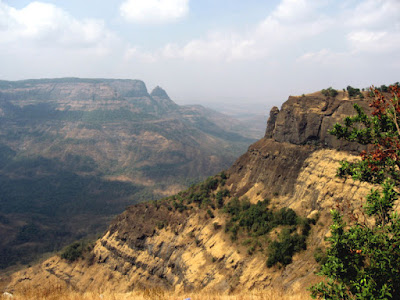 This certainly isn't a coincidence, and it's been thought for a while that the eruption, which occurred in what is now India and released an estimated one million cubic kilometers of lava, were at least contributory to the mass extinction that occurred at the end of the Cretaceous Period.  Such an unimaginably huge eruption would have burned everything in its path, converting any organic matter that got in the way into ash and carbon dioxide -- causing a spike in temperature that certainly would have put a huge strain on ecosystems to compensate.  The actual blow (literally) that marked the end of the Cretaceous Period, though, was an enormous meteorite collision, the Chicxulub Impact, near the Yucatan Peninsula on the other side of the planet.

Almost precisely on the other side, in fact.  This got Sprain et al. wondering if the two might be connected, especially since geologists still don't know what causes trap-type eruptions (there are two other trap eruptions known, the Emeishan Traps in China and the unimaginably huge Siberian Traps that are likely to be the cause of the largest mass extinction known, the Permian-Triassic Extinction).  Whatever the cause, it apparently happens without a great deal of warning, which is scarier than hell.  The crust of the Earth fissures, and phenomenal quantities of lava come pouring out, causing serious issues for anyone or anything living nearby.  But the observation that the Chicxulub Impact and the Deccan Traps are not only close to simultaneous but are almost exactly antipodal made scientists wonder if that wasn't a coincidence.

Apparently, the thought is this.  When the Chicxulub Impact occurred, it sent huge shock waves through the Earth, which propagated both through the mantle and along the crust.  When those waves had traveled all the way around (or through) the Earth, they converged on a single point, almost like a magnifying glass bringing rays of sunlight focusing on one spot.  This reinforced the waves, ringing the Earth like a bell, and the crust destabilized...

... cracking open and creating one of the largest volcanic eruptions ever.

So the whole thing becomes a double whammy, and not because of an unfortunate accident.  It seems likely that one event caused the other, and also explains why species that lived in what is now Asia were affected just as much by the extinction as ones that were near the collision itself.  Seems kind of unfair, doesn't it?  The meteorite collides with the Earth, causing massive devastation in the Western Hemisphere, and the critters in the Eastern Hemisphere only had a few minutes to gloat before a massive earthquake launched an event that did them in, too.

"Both the impact and Deccan volcanism can produce similar environmental effects, but these are occurring on vastly differing timescales," study co-author Courtney Sprain said.  "Therefore, to understand how each agent contributed to the extinction event, assessing timing is key."

There you have it.  Yet another reason why we wouldn't want the Earth to get hit by a huge asteroid, if you needed another one.  Kind of dwarfs the earthquakes and volcanoes we've had recently, doesn't it?  Also makes me realize how fragile the biosphere is, and that a sudden and unforeseen event can trigger enormous destruction -- one a bolt from the sky, the other from the deepest regions of the Earth's mantle.

Posted by Gordon Bonnet at 2:00 AM