Seven years ago, I wrote a post here at Skeptophilia about one of the most enduring mysteries of the twentieth century -- the deaths of nine hikers in the Ural Mountains in 1959, at a spot that later was named after the leader of the nine -- Igor Dyatlov.

The "Dyatlov Pass Incident" has all the hallmarks of an episode of The X Files.  The nine hikers set out in late January, almost exactly sixty years ago, with no inkling of what would happen.  When the group still hadn't showed up by the end of February, a good two weeks after their projected return date, a rescue team was sent out.

What they found is nothing short of extraordinary.  The members of the hiking group showed a variety of horrifying injuries, and a few had what looked like radiation burns.  More than one had removed most of their clothing -- and then frozen to death.  The tent they'd slept in was slit open, as if they were so desperate to get out they didn't even have time to unzip the flap.  (There are more details on my original post, if you're curious.) 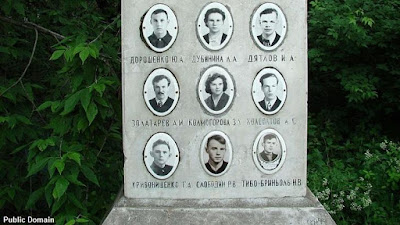 The upshot of it all is that it's never been definitively established what exactly happened.  The more prosaic explanations, for example that the hikers stumbled onto a Cold War Russian weapons test, have been categorically denied by the Russian government.  (At which point the conspiracy theorists waggle their eyebrows significantly and say, "Of course they denied it.")  The more out-there explanations include an attack from the Ural version of the Abominable Snowman and/or aliens.

The reason this all comes up is not just because just last week we passed the sixtieth anniversary of the Dyatlov team's departure, but because of a surprise announcement by the Russian government that they're reopening an investigation into the incident.  Aleksandr Kurennoy, the official spokesperson of the Prosecutor General's Office of the Russian Federation, released a statement on the Efir Internet channel regarding the resumption of the case.  "Our goal is to establish which of the 75 existing theories could be confirmed by reliable evidence," Kurennoy said.  "Between March 10-20, employees of the Sverdlovsk Region Prosecutor's Office will fly to the site of the incident together with geodesy experts and employees of the Emergencies Ministry.  The procedural deadlines have expired for all the other competent bodies, but this is not the case with prosecution agencies.  Apart from that, a new law has come into force that authorizes the prosecution to commission special expert evaluations as part of a probe."

I'm a little surprised about this in a couple of respects.  For one thing, the Russian government is not exactly well known for transparency, and it's odd that they want an investigation into a mystery where one of the possible solutions is shady dealings by the Russian government itself.  It's entirely possible, of course, that they'll release a report that makes them look good regardless what they find, although it does bring up the question of why they'd stir things up in the first place.  Seems like letting sleeping dogs lie would be the more prudent course.

Second, though, is what on Earth they could hope to find now, sixty years after the incident occurred.  There wasn't that much evidence to start with; in fact, the bodies of four of the nine were only recovered during the spring thaw when May came.  Heading out into a snow-covered wilderness, six decades after the fact, is unlikely to uncover anything new one way or the other.

So the whole thing is more than a little puzzling.  As much as I'd like to know what happened at Dyatlov Pass in the winter of 1959, my hunch is that we probably will never know enough to make a certain determination.  What's clear, though, is that this has renewed interest in the incident, especially amongst the conspiracy theorists, who are hoping like hell to get more fuel for their various fires.

Which they'll probably claim no matter what the Russians find.