We've learned a lot about our own galaxy by studying our "sister galaxy," Messier-31, better known as the Andromeda Galaxy.  It's situated about 2.5 million light years away, so from our perspective looks to the naked eye like little more than a smudge of light in the night sky. 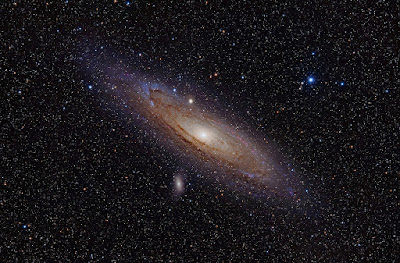 I remember when I was a kid and first grasped how far away Andromeda is.  Like many people of my generation, I was captivated by the original Star Trek.  In the episode "By Any Other Name," Kirk et al. are confronted by some aliens called Kelvans who come from the Andromeda Galaxy, and want to hijack the Enterprise to get back home.  Now, recall that because of warp drive, the intrepid space-farers of the United Federation of Planets are tooling about on a weekly basis, zipping from planet to planet, covering light-years of distance in mere hours.  So it was a bit of a shock -- to me, at least -- that at maximum warp, it would take three hundred years to reach the Andromeda Galaxy.

So far, in fact, that the Kelvans propose to reduce most of the crew to little geometric solids to save on food, lessen the likelihood of rebellion, have at least some of them still alive upon arrival, and also to reduce the number of extras the show's producers had to hire. 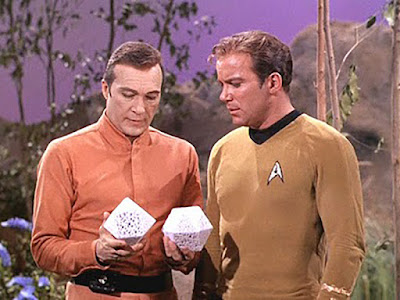 Of course, Kirk saves the day and they end up returning to our galaxy, kindly offering to leave the Kelvans on an uninhabited planet all their own.  Who could resist that?

In any case, I was blown away by how far away the Andromeda Galaxy is, not to mention the fact that the writers of Star Trek got that bit right given their extensive history of playing fast-and-loose with physics, despite Scotty's repeated admonition that ye canna change the laws thereof.  Everyone knows the stars in our own galaxy are far away; but this is an entirely different order of magnitude of distance.

Considering how far away we are from it, if you have a good enough telescope, it's surprising how spectacular it is.  Like our own, it's a spiral galaxy, so the disadvantage of being situated inside the thing we're trying to study has been ameliorated by the fact that there's a similar one right next door.  It's home to a trillion stars.

And there are some interesting ones.  Just last month, there was a paper in Nature about the discovery of a peculiar object called a recurrent nova that I had never heard of before.   A team of researchers found that this object, with the euphonious name M31N 2008-12a, is a white dwarf being circled by a small, dim star.  This pairing is resulting in some seriously cool behavior, which I'm glad we're observing from a safe 2.5 million light years away.

What's happening is this.  The white dwarf, which is the core of a collapsed star about the size of our Sun, has such a high gravitational pull that it's siphoning off material from its companion.  When the gas and dust approach the surface of the white dwarf, it's heated and compressed so much that the hydrogen component fuses into helium.  This releases so much energy that it causes an explosion, blowing away the top layer of the dust into space.

What's amazing is that these explosions are happening about once a year, and have been going on for a million years.  This has left a shell of dust 400 light years across.   But what's more fascinating still is that it can't go on forever.  Despite the explosions, the white dwarf is gradually gaining mass at the expense of its companion.  Once its mass gets to about 1.4 times the mass of the Sun -- the Chandrasekhar Limit -- the gravitational pull will exceed the outward pressure exerted by the atoms in the star, and it will collapse.  That collapse will trigger further fusion, of helium into carbon, carbon into oxygen, and so forth, and the energy produced by that will trigger one of the brightest events in the universe, a Type 1a Supernova.

Cool enough already, but wait till you hear the rest.  The fusion triggered by the explosion is what creates virtually all the heavier elements in the periodic table.  So a sizable fraction of the atoms in your body were formed during the first few seconds of a colossal stellar explosion.  We are, as Carl Sagan trenchantly remarked, truly made of star-stuff.

Oh, and the parts of the exploding white dwarf not blown away into space, to seed future planets and stars and life forms, are blown inward so hard that the electrons are forced into the atomic nuclei, resulting in, basically, a big ball o' neutrons.  This takes the remaining mass of the star and compresses it into a sphere about ten kilometers across, generating a substance so dense that a matchbox-sized piece of it would weigh three billion tons.

Like I said.  Good thing we're out here at a safe distance.  Sucks for the Kelvans, though.

The one disappointing thing is that the paper in Nature says that although the recurrent nova is still firing off once a year, the cataclysmic final explosion isn't going to happen for another forty thousand years, give or take a year or two.  So unfortunately, we won't be around to see it.  Unless some alien race shows up and turns us into geometric solids and sits us on a shelf, reawakening us just before the cosmic show starts.

But I suppose that's too much to hope for.

Posted by Gordon Bonnet at 5:42 AM