Going down with the ship

This past week I've been watching with frank bafflement as Donald Trump and his cronies try to steer their ship back into the harbor of evangelical Christianity, after a month that has been, all things considered, disastrous for this administration.  A government shutdown accomplished nothing but losing a shitload of money, and ended with Trump receiving a big old dent in his "I'm a champion negotiator who always gets what he wants" persona.  His support is dwindling in pretty much any demographic you choose, and one of his staunchest supporters -- Senate Majority Leader Mitch McConnell -- gave his own party an inadvertent punch in the balls a couple of days ago by admitting publicly that if it were easier for American citizens to vote, more Democrats would win.

In other words, his strategy for Republican victory is voter disenfranchisement.

All in all, it's been a tough month for the Right, so I suppose it's only natural they'd retreat toward a group who has been doggedly loyal -- the evangelical Christians.  First we had a rather baffling non sequitur from Trump himself, that there were efforts in "many states" to have biblical literacy classes in public schools.  "Starting to make a turn back?" he said on Twitter (of course).  "Great!"

Then we had White House Spokesperson Sarah Huckabee Sanders saying that God "wanted Donald Trump to become president."  "I think he has done a tremendous job in supporting a lot of the things that people of faith really care about," Sanders said. 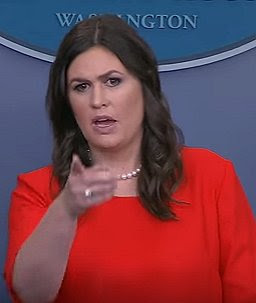 As I said, on the one hand, this is a pretty logical strategy; the ship is foundering, so hitch it to the solidest thing you have handy.  But on a deeper level, it's puzzling that anyone who claims to believe in the basic tenets of Christianity could still support Trump and his policies.  The bible's kind of unequivocal on a few points, you know?  Love thy neighbor as thyself.  Care for the poor and oppressed.  Let he who is without sin cast the first stone.

Then there's that awkward "judge not, lest ye be judged" part, most poignantly described in Matthew 7:5: "Thou hypocrite, first cast out the beam out of thine own eye; and then shalt thou see clearly to cast out the mote out of thy brother's eye."

But more peculiar still is that the Religious Right continues to think that Trump is the next best thing to the Second Coming of Christ, despite his being a serial adulterer who lies every time his mouth is open and whose biggest claim to fame is embodying all Seven Deadly Sins in one person.  The pastor of the church Trump at least nominally belongs to said last week, "I assure you, he had the ‘option’ to come to Bible study.  He never ‘opted’ in.  Nor did he ever actually enter the church doors.  Not one time."  So Trump's crowing about bible studies classes in public schools is kind of strange, especially considering that during the campaign in 2015 he said that the bible was his favorite book, but when pressed couldn't remember a single quotation from it.

I mean, hell, I'm an atheist and I'd have been able to come up with something on the fly.  Maybe a verse from Two Corinthians, I dunno.

But Sarah Huckabee Sanders's comment is the one that bugs me the most, because it's obvious that she (and presumably a lot of other evangelicals) don't see what thin ice they're skating on when they start claiming to know the divine will.  How does she know that God wanted Trump to win?  Because he did, obviously.  So I guess God also wanted Obama to win.  Two terms, no less.  Any time you say something's God's will simply because it happened, you're going to have some explaining to do.  Did God intend the Holocaust?  The Stalinist purges?  The massacre of Native Americans by the European colonists?  The Inquisition?  Frankly, I'd be happier with a shrug of the shoulders and the response, "God works in mysterious ways" than I am hearing that God actually intended the horrible deaths of millions of innocent people at the hands of amoral monsters.

So I don't get how even people who buy the main tenets of Christianity can stand there and nod when Sarah Huckabee Sanders says she has a direct pipeline to the divine will.  Or when evangelist Franklin Graham says that he can excuse the 8,100-plus documented, fact-checked lies that Donald Trump has uttered because "the president is trying to do the best that he can under very difficult circumstances."

If I didn't know better, I'd think that the Religious Right was callously and cynically supporting the Trump presidency because it achieves their ends -- pro-life legislation, eliminating equal rights for LGBTQ people, and ensuring the hegemony of white Christians -- and honestly don't give a rat's ass whether the president himself is Christian, or even moral.

I know it's presumptuous of me to try to parse the motives of a group whose beliefs I don't accept, but the whole thing still strikes me as baffling.  I keep wondering when the Religious Right will finally say, "Enough with this guy already," but at this point, I don't think it's going to happen.  I can't help but think that this strategy is going to backfire badly, and sooner rather than later.  People are at some point going to wise up and start asking how they can support this administration and still claim to be the moral arbiters of the United States, notwithstanding any kind of mealy-mouthed "God can work with a broken tool" nonsense.

The evangelicals, I think, are in the unenviable position of having hitched their rowboat to the Titanic.