Missive from a loser

Nota bene: If you don't want to read a rant, you may want to exit right now.

Yesterday I woke up to news of Donald Trump's El Paso pro-wall rally on just about every media website there is.  Among the highlights were Trump's claim that there were 69,000 people in the crowd (there weren't), that most of the wall is already built (it isn't), and that despite that, we've got a national emergency because we need to build the wall (we don't).  There was a call to Make America Great Again.  *cheers*  America needs secure borders.  *cheers*  Democrats want open borders, free admission to criminals, and eat babies for breakfast.  *cheers*

Don Jr. threw himself into whipping the crowd into a frenzy, and he did so by pointing out how cool it was to see young people in the crowd.   "You know what I love?" he said, to more cheers.  "I love seeing some young conservatives, ’cuz I know it’s not easy.  Keep up that fight, bring it to your schools.  You don’t have to be indoctrinated by these loser teachers that are trying to sell you on socialism from birth.  You don’t have to do it."

You think I have time to indoctrinate my students?  I'm too busy giving them a basic grounding in biology to waste class time telling them to become socialists.  In my 32-year career, I have known four -- count 'em, four -- teachers who were clearly partisan and made it clear their students were expected to toe the party line. 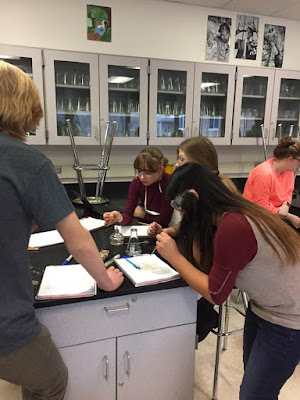 Some of my students last week, learning how to Gram stain bacteria [used with permission]

Even in my Critical Thinking class, which if I were not cautious could turn into a daily biased screed, I struggle constantly to maintain balance and fairly represent all angles.  In our unit on logical fallacies, I make sure that my examples of erroneous thinking are chosen from both sides of the political aisle (yes, I count them).  I make it clear that tossing aside the opposition's viewpoint simply because they are the opposition is as lazy as gullibility.  I tell my conservative students to make a point of checking out MSNBC every so often -- but I also tell my liberal students they need to check out Fox.

So: loser?  Excuse me?  I have thrown everything I have into teaching, on a daily basis, for over three decades.  I buy about a third of the lab supplies I use because our budgets have been cut to the bone and I'm unwilling to eliminate labs because we can no longer afford them.  I, and most of my colleagues, are at school well before the contract requires and stay there long after the contract says we could go home.  Teaching is a fun, frustrating, rewarding, exhausting career, and I hope I have touched some lives the way mine has been touched.  I still am thankful beyond words for the likes of Ms. Jane Miller (my high school biology teacher), Ms. Bev Authement (high school creative writing), and Dr. Harvey Pousson (college calculus).  They altered the course of my life, and I model much of my teaching on the kind, compassionate, interesting, funny style they brought to the classroom.

It's nothing short of appalling to be called a "loser" by a guy who has from kindergarten on gone to expensive, exclusive private schools, who never had to work a day in his life, who has been handed everything on a silver platter, and who still thinks he has the right to criticize people who work long hours in meaningful careers each and every day.  Even more appalling is that the #MAGA crowd thought what he was saying was just the cat's pajamas.  Damn liberal teachers, indoctrinating our young folks.  I'll definitely vote against the school budget next time it comes around.

And of course, I'm under no illusions as to why he's doing this.  I wouldn't call either Donald, Senior or Junior, smart, but they are not lacking in a low, animal cunning.  Not only does this message play well to their supporters -- tyrants keeping their followers feeling endangered and besieged is a strategy with a long and inglorious history -- but it also insulates them against even hearing another side to the issues.  Which is exactly what the Trumps want.  Create an airtight, vacuum-sealed echo chamber, and don't even let a hint of the opposition's argument cross.  Represent everything the liberals say in straw-man arguments, convince the true believers that all they need to do is listen to Dear Leader and his son and everything will be fine.

It makes me despair a little for the future of America.  I have a naturally optimistic bent -- as I've said before, it'd be silly to be a teacher if I was a pessimist -- but stuff like this makes me think we haven't hit rock bottom yet.  The fight back upwards is going to be a long and arduous one.  And I, for one, am thankful that there are teachers who are still out there giving our children the tools they need to see foolish propaganda for what it is.

But on a more personal note, to Junior himself; how dare you disparage me and my colleagues when I doubt you have set foot in a public school in your entire life.  Your ignorance and snide arrogance are stomach-turning to anyone who knows what actually happens in schools.  So I'll end with saying this, from the bottom of my heart, and I hope you're listening:

You can go to hell.