I'm perpetually astonished at how little it takes to get the woo-woos going.

I suppose, though, that's the definition of confirmation bias -- taking thin evidence (or skimpy anecdote) as incontrovertible support for what you already believed.  Me, I try to approach stuff with more caution -- I'm not perfect, but I do my best when confronted with a strange or intriguing story to stop and think, "Wait a moment, how do I know this is true... and means what people are saying it means?"

I ran into two particularly good examples of that yesterday.  In the first, we have people saying that the appearance of three dead oarfish in coastal Japan is indicative that they're in for a major undersea earthquake and tsunami.  Now, there's no doubt that seeing an oarfish would make you sit up and take notice; they live in deep waters and are usually only seen when they're dead or dying, and can get up to eleven meters long.  (Yes, I double-checked that statistic, and it's correct.)

So I suppose it's no wonder that people stop and say, "Okay, that's weird," when they see one.  But oarfish are not uncommon, despite seldom being seen; and there are lots of cases of dead oarfish washing up on shore that were not followed by geological catastrophes.   "I have around twenty specimens of this fish in my collection so it’s not a very rare species, but I believe these fish tend to rise to the surface when their physical condition is poor, rising on water currents, which is why they are so often dead when they are found," said Hiroyuki Motomura, professor of ichthyology at Kagoshima University.  "The link to reports of seismic activity goes back many, many years, but there is no scientific evidence of a connection so I don’t think people need to worry."

Which, of course, will have precisely zero effect on the woo-woos.  What the hell does some silly scientist know about, um, science?  There will be an earthquake, you'll see!  (Of course, it helps that the oarfish were found on the coast of Japan, because Japan is -- stick with me, here -- a freakin' earthquake zone.)

The other story comes from a perusal of some twelve million documents that were declassified two years ago by the CIA.  This started all the conspiracy theorists sifting through them, because of course if the CIA wanted to keep an evil conspiracy secret, the first thing they'd do is declassify all the files surrounding it.  But even the wooiest woo-woo takes a while to go through twelve million files, so it was only a couple of weeks ago that we found out that in the files were photographs of...

We're told about how spooky and eerie these photographs are, and how they could be aliens or ghosts, or connected to MKUltra or the Illuminati or god alone knows what else.  "The silhouettes are composed of visual noise, almost like television static," we're told, "and have empty voids where their faces should be."  There were two of them, we find out, and each silhouette has a number on it -- 1569 on one, 1572 on the other.

I thought, "Okay, that does sound pretty creepy."  And naturally, I wanted to see the images myself.  So I clicked the link, and here's what I saw: 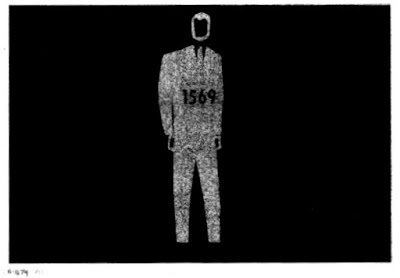 And I said -- this is a direct quote -- "You have got to be fucking kidding me right now."

This isn't a photograph, it's a drawing.  And not even a very good one.  (In the interest of rigorous research, I looked at the other one, which is identical except for saying "1572" and facing the other direction.)  It is mildly curious that these would be in CIA files, although I wouldn't be surprised if it turns out that the CIA people stuck 'em in there when they declassified the files in order to watch the woo-woos leap about and make excited little squeaking noises.

Which is exactly what happened.

The universe is a wonderful, complex, intriguing, mysterious place.  There is plenty to investigate, plenty to be amazed at, without making shit up or stretching pieces of observable evidence to the snapping point.  So let's all calm down a little, okay?  I'm sure Japan will eventually have another major earthquake (cf. my previous comment about earthquake zones), and I'm also sure there'll be weird random things in the CIA files, whether or not my surmise about people sticking them in deliberately to stir the pot turns out to be true.  But grabbing those little pieces of data and running off the cliff with them is not advisable.