One of the most unusual stories that H. P. Lovecraft ever wrote is "In the Walls of Eryx."  It isn't the usual soul-sucking eldritch nightmares from the bubbling chaos at the center of the universe; in fact, it's his only real science fiction story.  It centers around a human colony on Venus, devoted to mining a kind of crystal that can be used for propulsion.  There's an intelligent native species -- reptilian in appearance -- who was content to let the humans bump around in their space suits (Lovecraft at least got right that the atmosphere would be toxic to humans) until the humans started killing them.  At that point, they started fighting back -- and setting traps.

The story centers around a crystal hunter who is out on an expedition and sees a huge crystal in the hands of a (human) skeleton.  He goes toward it, and bumps into an unseen obstacle -- completely transparent walls, slick (and therefore unclimbable) and twelve feet tall (so unjumpable).  The problem is, when he tries to back out, he's already moved around a bit, and doesn't retrace his steps perfectly.

Then he runs into another wall.

What's happened is that he's stumbled into an invisible labyrinth.  And how do you find your way out of a maze if you can't see it?  You'll just have to read it.  It's only a dozen or so pages long, and is one of the neatest (and darkest) puzzle-box stories you'll ever pick up.

It's been known since Lovecraft's time ("In the Walls of Eryx" was written in 1936) that Venus was covered by clouds, and its surface was invisible from Earth.  Of course, a solid mantle of clouds creates a mystery about what's underneath, and speculation ran wild.  We have Lovecraft's partially-correct solution -- a dense, toxic atmosphere.  Carl Sagan amusingly summed up some of the early thinking on Venus in the episode "Heaven and Hell" from his groundbreaking series Cosmos: "I can't see a thing on the surface of Venus.  Why not?  Because it's covered with a dense layer of clouds.  Well, what are clouds made of?  Water, of course.  Therefore, Venus must have an awful lot of water on it.  Therefore, the surface must be wet.  Well, if the surface is wet, it's probably a swamp.  If there's a swamp, there's ferns.  If there's ferns, maybe there's even dinosaurs...  Observation: I can't see anything.  Conclusion: dinosaurs."

Of course, reputable scientists didn't jump to these kinds of crazy pseudo-inferences.  As Neil deGrasse Tyson points out, "If you don't know, then that's where your conversation should stop.  You don't then say that it must be anything."  (Perhaps not a coincidence that Tyson was the host of the reboot of Cosmos that appeared two years ago.)

The first hint that Venus was not some lush tropical rain forest came in the late 1950s, when it was discovered that there was electromagnetic radiation coming from Venus that only made sense if the surface was extremely hot -- far higher than the boiling point of water.  This was confirmed when the Soviet probe Venera 9 landed on the surface, and survived for 127 minutes before its internal circuitry fried.

In fact, saying it's "hot" is an understatement of significant proportions.  The average surface temperature is 450 C -- 350 degrees higher than the boiling point of water, and hot enough to melt lead.  The atmosphere is 96.5% carbon dioxide (compared to 0.04% in the Earth's atmosphere), causing a runaway greenhouse effect.  Most of the other 3.5% is nitrogen, water vapor, and sulfur dioxide -- the latter being the rotten-egg chemical that, when mixed with water, creates sulfuric acid.

Yeah.  Not such a hospitable place.  Even for crystal-loving intelligent reptiles. 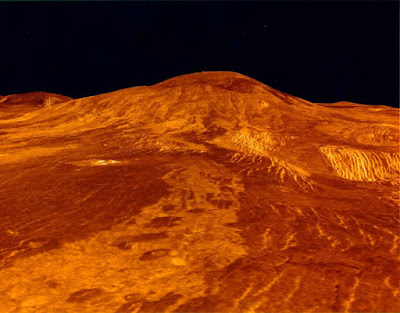 Photograph from the surface of Venus [Image is in the Public Domain, courtesy of NASA/JPL]

But there's still a lot we don't know about it, which is why at the meeting last fall of the American Geophysical Union, there was a proposal to send a probe to our nearest neighbor.  But this was a probe with a difference; it would be attached to a balloon, which would keep it aloft, perhaps indefinitely given the planet's horrific convection currents.  From there, we could not only get photographs, but more accurate data on the atmospheric chemistry, and possibly another thing as well.

One of the things we don't know much about is the tectonics of the planet's surface.  There are clearly a lot of volcanoes -- unsurprising given how hot it is from other causes -- but whether the crust is shifting around the way it does on Earth is not known.  One way to find out would be looking for "venusquakes" -- signs that the crust was unstable.  But how to find that out when probes on the surface either melt or get dissolved by the superheated sulfuric acid?

The cool suggestion was that because of the atmosphere's density, it might be "coupled" to the surface.  So if something shook the surface -- a venusquake or volcanic eruption -- those waves might be transferred to the atmosphere.  (This effect is insignificant on Earth because our atmosphere is far, far less dense.)  Think of a plate with a slab of jello on it -- if you shake the plate, the vibrations are transferred into the jello because the whole thing is more or less stuck together, so the surface of the jello wobbles in resonance.

An airborne probe might be able to tell us something about Venus's geology, which is pretty awesome.  It appeals not only to my fascination with astronomy, but my love of a good mystery, which the second planet definitely is.

So I hope this project gets off the ground, both literally and figuratively.  Even if it's unlikely to detect anything living -- reptilian or not -- we could learn a great deal about what happens when the carbon dioxide levels start undergoing a positive feedback.

A scenario we all would like very much not to repeat here at home.