After yesterday's screed about the anti-education stance of this administration, today in the interest of reducing my likelihood of spontaneously combusting out of rage I'm going to retreat to my happy place, which is: weird and cool scientific discoveries.

I have a fascination for quantum physics.  Not that I can say I understand it that well; but no less than Nobel laureate and generally brilliant guy Richard Feynman said (in his lecture "The Character of Physical Law"), "If you think you understand quantum mechanics, you don't understand quantum mechanics."  I have a decent, if superficial, grasp of such loopy ideas as quantum indeterminacy, superposition, entanglement, and so on.  Which is why I find the following joke absolutely hilarious:


Heisenberg and Schrödinger were out for a drive one day, and they got pulled over by a cop.  The cop says to Heisenberg, who was driving, "Hey, buddy, do you know how fast you were going?"

Heisenberg says, "No, but I know exactly where I am."

Thanks, you're a great audience.  I'll be here all week.

In any case, a paper came out last month in Proceedings of the National Academy of Sciences called, "Experimental Demonstration of the Quantum Pigeonhole Paradox," by a team of physicists at China's University of Science and Technology, which was enough to make my brain explode.  Here's the gist of it, although be forewarned that if you ask me for further explanation, you're very likely to be out of luck.

There's something called the pigeonhole principle in number theory, that seems kind of self-evident to me but apparently is highly profound to number theorists and other people who delve into things like sets, one-to-one correspondences, and mapping.  It goes like this: if you try to put three pigeons into two pigeonholes, one of the pigeonholes must be shared by two pigeons.

See, I told you it was self-evident.  Maybe you have to be a number theorist before you find these kind of things remarkable. 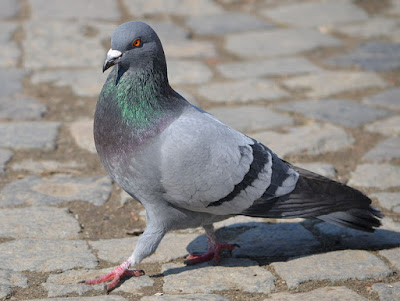 ... that when you compare the polarization states of the three photons, no two of them are alike.

Hey, don't yell at me.  I didn't discover this stuff, I'm just telling you about it.

It's not that I distrust them or am questioning their results (I'm hardly qualified to do so), but I feel like what they're saying makes about as much sense as saying that 2+2=5 for large values of 2.  Every time I'm within hailing distance of getting it, my brain goes, "Nope.  If the first two photons are, respectively, horizontally polarized and vertically polarized, the third has to be either horizontal or vertical."

The mind-bending behavior is the result of a combination of already strange quantum effects.  The photons begin the experiment in an odd kind of limbo called a superposition, meaning they are polarized both horizontally and vertically at the same time.  When two photons’ polarizations are compared, the measurement induces ethereal links between the particles, known as quantum entanglement.  These counterintuitive properties allow the particles to do unthinkable things.

Which helps.  I guess.  Me, I'm still kind of baffled, which is okay.  I love it that science is capable of showing us wonders, things that stretch our minds, cause us to question our understanding of the universe.  How boring it would be if every new scientific discovery led us to say, "Meh.  Confirms what I already thought."