After a deep philosophical discussion, a friend once said to me, "You're only a skeptic because you don't have the balls to be a mystic."

I bristled (of course) and explained that my skepticism came from a desire to base my understanding on something more concrete than feelings and desires.  She shot back, "So you wouldn't have accepted the truth of atoms before the experiments that proved their existence."

"I would not have known they were real, no," I responded.

"So there could be great swaths of knowledge outside your direct experience, of which you are entirely ignorant."

"There could be, but I have no way of knowing."

She gave me a wicked grin and said, "The mystics do."

Predictably, neither of us convinced the other in the end.  I don't think any amount of mysticism would have arrived at the Bohr model of the atom and the periodic table, for example.  But the reason her arrow went in as deeply as it did is that she wasn't entirely wrong.  I have had a fascination with "other ways of knowing" -- mysticism, psychic phenomena, altered states of consciousness, and the like -- for as long as I can remember.  The lack of evidence for most of it has not dulled my interest -- if anything, it's piqued it further. 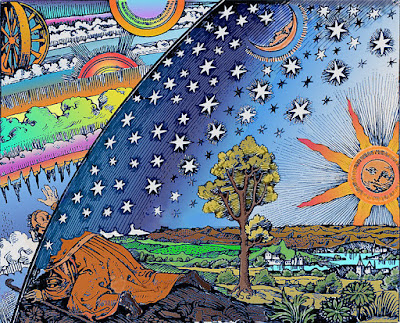 Woodcut by Camille Flammarion (1888) [Image is in the Public Domain]

So I have this sort of dual life.  On the one hand, I consider myself of the hard-edged, evidence-demanding skeptical type.  On the other, I'm drawn to all sorts of woo-woo stuff that, despite my scoffing at it by day, has me researching it in the wee hours when I figure everyone's asleep and I won't get caught out.

It's also why all of my novels have a paranormal twist.  Living vicariously through my characters, I suppose.

Understandable, then, that my ears perked up immediately when I saw an article written by Dr. Julia Mossbridge in (of all places) The Daily Mail.  I've written about Mossbridge before -- she's been researching telepathy and precognition for fifteen years -- and my problem with her research, then and now, is that I don't see any possible mechanism by which either of those could work.

But.  That a scientist of her stature would continue to stand by this claim means it's worth consideration.  And I have to be careful of my own biases -- we all are prone to confirmation bias, and if my bent is to look at the world in a mechanistic fashion, it might well blind me to what's really going on.  It's never a good idea to jump from "I don't see how this could be true" to "this isn't true."  It's just a thinly-disguised version of the argument from ignorance, isn't it?  As Neil deGrasse Tyson put it, "Going from an abject statement of ignorance to an abject statement of certainty."

As far as what Mossbridge is actually claiming, it's more than a little fascinating.  She writes:


I led a team at the respected Northwestern University in the U.S. that analysed 26 experiments published over the previous 32 years, all of which examined the claim that human physiology can predict future important or emotional events.

In all of the experiments we analysed, a random number generator was used to select the future image so it was impossible to cheat.  The answer, our research concluded, is ‘yes’.  When you add all these experiments together, it became clear the human body goes through changes in advance of future important events — alerting our non-conscious minds seconds earlier to what is likely to happen.

On average, participants’ bodies showed changes that were statistically reliable.  For instance, they would sweat more (a behaviour associated with fear) before they were shown an image of a gun, and less before they saw a flower.

This happened too often to be scientifically considered chance.

All of this, of course, runs counter to the sense most of us have that time flow is one-directional.  How could the future influence the present?  But as Mossbridge correctly points out, the "arrow of time" problem is one of the great unsolved mysteries of physics.  Virtually all of the physicists' equations are time-symmetric -- the math works equally well whether time is flowing forward or backward.   One of the only exceptions is entropy -- which deserves a bit more explanation.

We observe that systems tend to progress toward more chaotic (high entropy) states.  A glass breaks, but the pieces never spontaneously come together and reassemble into a glass.  The sugar you've stirred into your coffee never comes back together into solid crystals sitting at the bottom of the cup.  Why is that?

The simplest explanation of this can be illustrated using a deck of cards.  If you were to shuffle an ordinary deck, what's the likelihood that (by random chance) they'd end up in numerical order by suit?

Nearly zero, of course.  The reason is that there are only 24 different states where they are organized that way (depending on the order of the suits), whereas there is a nearly infinite number of possible other arrangements.  So if you jump from one arrangement to another (by shuffling), the chance of landing on one of the 24 ordered states is very close to zero.  Progression toward disorder is the rule because, in general, there are way more disordered states than ordered ones.

But this still doesn't explain all of the other cases where time is completely symmetric.  Why do we remember the past but know nothing about the future?  The simple answer is that no one knows.  Einstein himself said, "The distinction between past, present, and future is an illusion, although a remarkably stubborn one."

So I'm curious to find out more of what Mossbridge is claiming.  And I'll soon have my chance, as I just ordered her new book The Premonition Code, which details the evidence that has convinced her and others that precognition actually exists.  (If you'd like to order the book as well, click the image below.)

Until then, I have to say the jury's still out on this one.  I'm trying to push aside both the disbeliever and the mystic that cohabit in my brain, and stick with the skeptic -- look at the argument as dispassionately as I can, and see where it leads.  Faced with a huge, mysterious, and complex universe, that's about the best we can ever do.