In today's episode of Confirmation-Bias-"R"-Us, we have: an odd observation about stellar velocities proving that the entire universe is conscious.

The observation itself is pretty obscure; I'm something of an amateur stargazer and I'd never heard of it before.  It's called Paranego's discontinuity, and is such a marginal footnote that it doesn't have so much as a Wikipedia entry.  The only places I can find mention of it are on sites devoted to panpsychism -- the idea that consciousness is imbued in all matter -- so the only decent explanation I could find is on a site called Conscious Stars, which I'm taking with a grain of salt right from the get-go.  But here's what they have to say:


Parenago’s Discontinuity, an observational effect, confirmed in main sequence stars out to ~260 light-years, describes faster galactic revolution velocities for stars cooler than (B-V)~0.5...  Here, it is demonstrated, using observational data published in the 1930’s for a small star sample that the onset of molecular spectral lines in stellar reversing layers occurs almost precisely at the velocity discontinuity.  The shape of the previously published galactic revolution velocity vs. (B-V) color index for several thousand stars is very similar to the curve of G spectral line width vs. (B-V) for the small stellar sample considered, which suggests a connection between molecules and Parenago’s Discontinuity.

So we have a strange correlation between stellar temperature and observed velocities of revolution, something that is certainly worthy of investigation.   But New York City College of Technology professor of physics Gregory Matloff says it's indicative of something that if true, is pretty earthshattering -- that the stars themselves are consciously altering their velocities for some unknown reason.  In a paper in The Journal of Consciousness Exploration and Research, Matloff writes:


...I elected to investigate whether there is any evidence to support his core metaphysics—that the universe is in some sense conscious and that a portion of stellar motion is volitional (as an alternative to Dark Matter).  Stars do not possess neurons or tubules, but the spectral signatures of cooler stars such as the Sun reveal the presence of simple molecules.  A universal proto-consciousness field congruent with vacuum fluctuations could interact with molecular matter via the contribution of the Casimir Effect to molecular bonds...  As discussed in the paper, local explanations for Parenago’s Discontinuity seem inadequate...  If the Discontinuity is a galaxy-wide phenomenon, the volitional star hypothesis will be advanced.  One way that a minded star could alter its galactic trajectory is by the emission of a uni-directional jet.  Such jets have been observed in young stars.  Future work will hopefully show how uni-directional jets correlate with star temperature and distance from the galactic center.  It is therefore not impossible that panpsychism can emerge from philosophy to become a subdivision of observational astrophysics.

I certainly think it's an interesting correlation that odd stellar velocities are seen in stars cool enough to allow for the presence of molecules (ordinary, hotter stars are so energetic they tear molecules apart as soon as they form).  But as a chain of logic, odd velocities + molecules = the universe is conscious and stars are engaging in jet propulsion to move around seems like a bit of a reach. 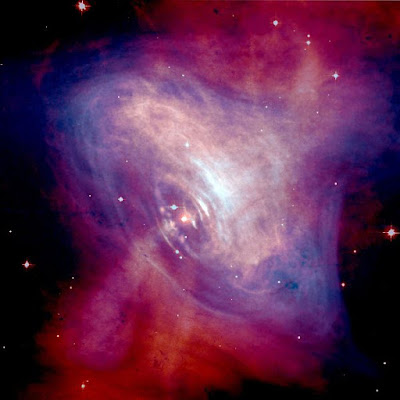 What seems to be going on here is that virtually everyone who mentions Paranego's Discontinuity already believes in panpsychism, so when confronted with stars moving in a way that seems to conflict with ordinary physics they immediately jump to the conclusion that the stars themselves are "volitional."  There are dozens of examples of strange, seemingly inexplicable observations in astronomy alone -- all of which turned out to have completely ordinary scientific explanations, with no recourse to aliens, magic, or stellar consciousness.  My favorite example is Jocelyn Bell's discovery of pulsars -- collapsed stars that spin so fast they seem to flicker on and off dozens of times per second.  It seemed so bizarre that when the signal was first noted, it was nicknamed "LGM" (Little Green Men) because it was hard to imagine a natural object that could switch on and off so fast.  Of course, it turned out to be a natural phenomenon -- which I suspect Paranego's Discontinuity will as well.

My problem here is not that panpsychism is impossible.  Consciousness is still an unexplained phenomenon even in ourselves, so it would be inadvisable for me to say it couldn't occur elsewhere.  But one observation of strange physics is pretty thin evidence for such a radical concept.  Here I fall back on the ECREE Principle -- Extraordinary Claims Require Extraordinary Evidence.

In any case, it's hard to imagine anyone being convinced by this who wasn't already sold on the idea of universal consciousness.  As for me, I'm waiting for more evidence before I start thinking that when I'm looking up at the stars at night, they're looking back.