I was an amateur stargazer as a kid.  I had a small refracting telescope and spent many hours out in my parents' front yard, looking at stars and planets and whatever else I could find.  My favorite astronomical object was (and, in fact, still is) the Pleiades, a star cluster and "stellar nursery" in the constellation Taurus: 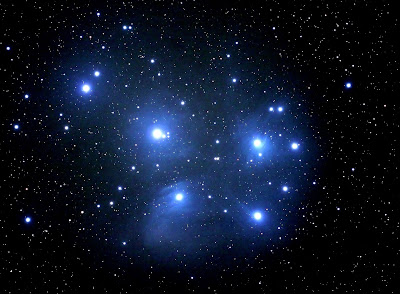 I pondered many times whether the stars I looked at hosted planets, and those planets intelligent life -- and whether there might be a little alien boy looking back at me through his telescope.  I also sometimes liked to stand on my head (I was a bit of a strange kid, a fact that should shock no one) and I remember thinking that when I did that at night, I had the stars beneath my feet.  And if I started falling upward, I would fall forever.

Such are the musings of a whimsical ten-year-old wannabe science nerd.

I still have a sense of wonder whenever I look up into the sky.  The sheer scale of it leaves me breathless.  And with every new discovery made about the universe we live in, the awe I feel becomes that much stronger.  Take, for example, the bit of research published last week in the journal Astronomy & Astrophysics, that many of the stars in the Southern Hemisphere of the sky are part of a stellar cluster that is in the process of being torn apart by tidal forces from the Milky Way.

The paper is entitled, "Extended Stellar Systems in the Solar Neighborhood: Discovery of a Nearby 120° Stellar Stream in Gaia DR2," by Stefan Meingast and Verena Fürnkranz of the University of Vienna and João Alves of Harvard University, and describes a startling finding -- an estimated 4,000 of the stars visible from southern latitudes are part of a "river of stars" produced when what was a compact cluster is stretched out into a long stellar stream.

These things aren't common, so to find one only (only!) 326 light years away is pretty phenomenal.  "Identifying nearby disc streams is like looking for the proverbial needle in a haystack," Alves said in an interview with Science Alert.  "Astronomers have been looking at, and through, this new stream for a long time, as it covers most of the night sky, but only now realise it is there, and it is huge, and shockingly close to the Sun.  Finding things close to home is very useful, it means they are not too faint nor too blurred for further detailed exploration, as astronomers dream." 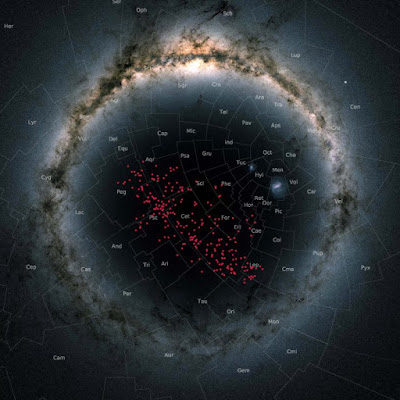 The researchers think that the stars in the stream (and therefore the cluster in which they originated) is about a billion years old, meaning it's had time for about four complete revolutions around the galactic center.  This is time enough for tidal forces exerted by the Milky Way to stretch the cluster out from its original shape -- which was possibly something like the Pleaides -- into a streamer going nearly halfway around the night sky.

I wish I could see those stars, but none of them are visible from my perspective here in the frozen North.  I know they don't look any different from the stars I see at night, but still, the idea that I'd be looking at a stellar river that came from a billion-year-old cluster is pretty awe-inspiring.  But since I don't have any trips to the Southern Hemisphere planned, I'll just have to stick with the ones in my own neighborhood, which are wonderful enough.

Maybe they'll even inspire me to stand on my head.