The power of phonemes

"Symbolic" because spoken sounds or written character strings stand for concepts, actions, or objects; "arbitrary" because those sounds or characters have no logical connection to what they represent.  The word "dog" is no more inherently doggy than the French word (chien) or Swahili word (mbwa).  The exceptions, of course, are onomatopoeic words like "bang," "pop," "splat," and so on.

That's the simple version, anyhow.  Reality is always a lot messier.  There are words that are sort-of-onomatopoeic; "scream" sounds a lot screamier than "yell" does, even though they mean approximately the same thing.  And it's the intersection between sound and meaning that is the subject of the research of cognitive psychologist Arthur Glenberg of Arizona State University.

In an article in The Conversation, Glenberg provides some interesting evidence that even in ordinary words, the sound/meaning correspondence may not be as arbitrary as it seems at first.  It's been known for a while that hearing spoken language elicits response from the parts of the brain that would be activated if what was heard was reality; in Glenberg's example, hearing the sentence "The lovers held hands as they walked along the moonlit tropical beach" causes a response not only in the emotional centers of the brain, but in the visual centers and (most strikingly) in the part of the motor center that coordinates walking.  When hearing language, then, our brains on some level become what we hear.

Glenberg wondered if it might work the other way -- if altering the sensorimotor systems might affect how we interpret language.  Turns out it does.  Working with David Havas, Karol Gutowski, Mark Lucarelli, and Richard Davidson of the University of Wisconsin-Madison, Glenberg showed that individuals who had received Botox injections into their foreheads (which temporarily paralyzes the muscles used in frowning) were less able to perceive the emotional content of written language that would have ordinarily elicited a frown of anger.

Then, there's the kiki-booba experiment, done all the way back in 1929 by Wolfgang Köhler, which showed that at least in some cases, the sound/meaning correspondence isn't arbitrary at all.  Speakers of a variety of languages were shown the following diagram: 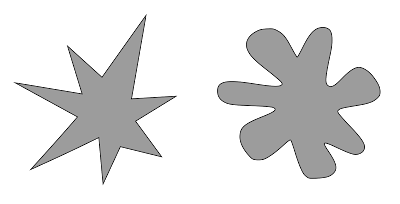 They're told that in a certain obscure language, one of these shapes is called "kiki" and the other is called "booba," and then are asked to guess which is which.  Just about everyone -- regardless of the language they speak -- thinks the left-hand one is "kiki" and the right-hand one is "booba."  The "sharpness" of "kiki" seems to fit more naturally with a spiky shape, and the "smoothness" of "booba" with a rounded shape, to just about everyone.

So Glenberg decided to go a step further.  Working with Michael McBeath and Christine S. P. Yu, Glenberg gave native English speakers a list of ninety word pairs where the only difference was that one had the phoneme /i/ and the other the phoneme /ʌ/, such as gleam/glum, seek/suck, seen/sun, and so on.  They were then asked which of each pair they thought was more positive.  Participants picked the /i/ word 2/3 of the time -- far more than you'd expect if the relationship between sound and meaning was truly arbitrary.

"We propose that this relation arose because saying 'eee' activates the same muscles and neural systems as used when smiling – or saying 'cheese!'" Glenberg writes.  "In fact, mechanically inducing a smile – as by holding a pencil in your teeth without using your lips – lightens your mood.  Our new research shows that saying words that use the smile muscles can have a similar effect.

"We tested this idea by having people chew gum while judging the words.  Chewing gum blocks the systematic activation of the smile muscles.  Sure enough, while chewing gum, the judged difference between the 'eee' and 'uh' words was only half as strong."

Glenberg then speculates about the effect on our outlook when we hear hateful speech -- if the constant barrage of fear-talk we're currently hearing from politicians actually changes the way we think whether or not we believe what we're hearing.  "The language that you hear gives you a vocabulary for discussing the world, and that vocabulary, by producing simulations, gives you habits of mind," he writes.  "Just as reading a scary book can make you afraid to go in the ocean because you simulate (exceedingly rare) shark attacks, encountering language about other groups of people (and their exceedingly rare criminal behavior) can lead to a skewed view of reality...  Because simulation creates a sense of being in a situation, it motivates the same actions as the situation itself.  Simulating fear and anger literally makes you fearful and angry and promotes aggression.  Simulating compassion and empathy literally makes you act kindly.  We all have the obligation to think critically and to speak words that become humane actions."

To which I can only say: amen.  I've been actively trying to stay away from social media lately, especially Twitter -- considering the current governmental shitstorm in the United States, Twitter has become a non-stop parade of vitriol from both sides.  I know it's toxic to my own mood.  It's hard to break the addiction, though.  I keep checking back, hoping that there'll be some positive development, which (thus far) there hasn't been.  The result is that the ugliness saps my energy, makes everything around me look gray and hopeless.

All of it brings home a quote by Ken Keyes, which seems like a good place to end: "A loving person lives in a loving world.  A hostile person lives in a hostile world.  Everyone you meet is your mirror."  This seems to be exactly true -- all the way down to the words we choose to speak.