Tracing the lapse of ages

The evolutionary model is one of the most powerful explanatory devices in biology.  It has led to discoveries that simply blow the mind -- such as the fact that dinosaurs didn't go extinct after all (we still have 'em -- we just call 'em birds).  As Richard Dawkins has demonstrated, all you need is an imperfect replicator (DNA) and a selecting agent (the environment) and you can create massive changes in way fewer generations than you'd think.

Of course, sometimes that may not result in an improvement. 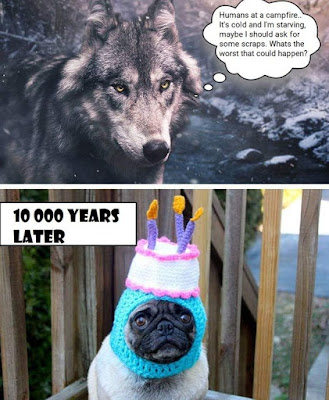 I want to tell you today about two fascinating examples of evolutionary conundrums, both about our friends the erstwhile dinosaurs -- and similar occurrences which had nearly opposite results.

These smart, pretty birds, bright blue with gray markings, are made up of two populations.  The first (and largest) is represented by Woodhouse's Scrub Jay (Aphelocoma woodhouseii): 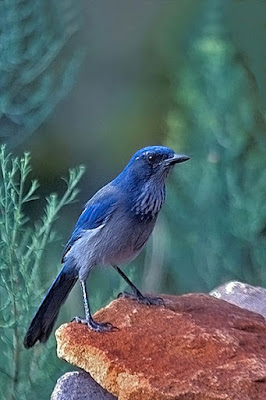 The second is the Florida Scrub Jay: 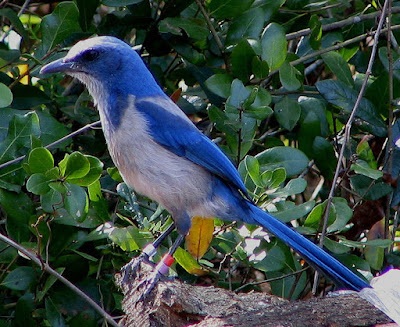 Pretty similar, right?  Odd, then, that these two photographs were taken 2,700 kilometers apart -- and there are no scrub jays of any kind in between.

Given the fact that the western scrub jays (which include three other species besides Woodhouse's) are a much larger and more diverse population than their Floridian cousins, it's likely the Florida Scrub Jay's ancestors came from the west rather than the reverse.  But how?  They're not migratory, so they didn't get blown off course on migration (which happens -- for three years running a Pacific Loon showed up in Cayuga Lake in upstate New York).  So what caused the split -- and when?  There's apparently been little drift in the populations since the division occurred, given the fact that they're pretty similar still, but that might be low selection, not short time spans.

The bottom line is, we don't know.  The scrub jays are a textbook example of allopatric range distribution -- related populations that have no range overlap.  And while in some cases these peculiarities have been explained, this one has not.

Even odder -- and virtually the opposite in end result -- came out of a genetic study of skeletons of the adzebills (Aptornis spp.), a pair of species native to New Zealand which went extinct from overhunting after the colonization of the islands by the Maoris.  They were impressive birds -- flightless, predatory, just under a meter tall, with the heavy, sharp, downcurved bills that gave them their common name. 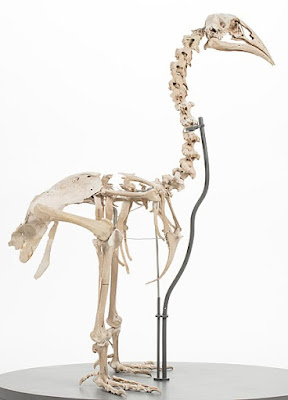 Their general shape led scientists to think they may be related to moas -- enormous flightless birds that went extinct right around the same time as the adzebills did.  But here, appearance and size are misleading.  The study, published last week in Diversity, has shown the genetics of the adzebills indicates their closest living relatives are a group of birds in Africa... 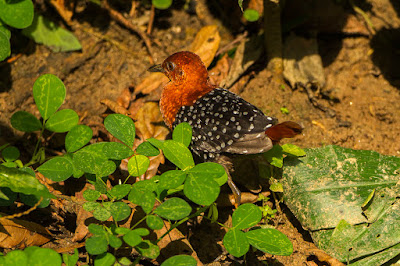 "A lot of past genetic research and publicity has focused on the moa, which we know were distant relatives of the ostrich, emu, and cassowary," said study co-author Dr Kieren Mitchell of the University of Adelaide.  "But no one had analysed the genetics of the adzebill, despite a lot of debate about exactly what they were and where they came from."

Study co-author Trevor Worthy of Flinders University added, "We know that adzebills have been in New Zealand for a relatively long time, since we previously discovered a 19 million-year-old adzebill fossil on the South Island...  A key question is whether they've been present since New Zealand broke away from the other fragments of the supercontinent Gondwana or whether their ancestors flew to New Zealand from elsewhere later on."

But... look at these two.  (The birds, not the researchers.)  Even the most diehard scientific type might raise an eyebrow at these being closely related.  However, consider my first example -- the wolf and the pug.  Selective breeding of cats and dogs has produced enormous differences in only a few hundred years.  Imagine you were an alien biologist, come to Earth to catalog all the species of life on this planet, and you ran across a chihuahua and a Saint Bernard.

My guess is if you told the alien biologist they were the same species, he/she/it would laugh in your face.  But they are, in fact, genetically very close, and in fact are even theoretically interfertile.  (Although what a Saint Berhuahua would look like kind of boggles the imagination.  Plus, the mechanics of the conception are a little problematic.  I mean, if it was a male chihuahua and a female Saint Bernard, would they, like, give him a stepladder or something?)

An imperfect replicator plus a selecting agent plus time can create wonders.  It seems fitting to end this post with a quote from Charles Darwin's The Origin of Species which I think sums it up brilliantly:


It may metaphorically be said that natural selection is daily and hourly scrutinising, throughout the world, the slightest variations; rejecting those that are bad, preserving and adding up all that are good; silently and insensibly working, whenever and wherever opportunity offers, at the improvement of each organic being in relation to its organic and inorganic conditions of life.  We see nothing of these slow changes in progress, until the hand of time has marked the lapse of ages.