You can't win, you can't break even

It's bad enough when laypeople misuse scientific terms and are too damn lazy even to read the Wikipedia pages on scientific topics.  What's absolutely maddening is when a science publication does the same thing.

I'm referring to New Scientist, which is no fly-by-night pay-to-play predatory journal, and should surely know better.  It's been around since 1956 and bills itself as the home of cutting-edge research, never shying away from a controversial topic -- but that's no reason to give unwarranted legitimacy to nonsense.

Of course, this isn't the first time they've pulled this sort of crap.  A sensationalized article about the now-discredited "EM Drive" (a thruster that requires no propellant) drew condemnation from a number of sources, leading then-editor Jeremy Webb to state in defense, "this is an ideas magazine—that means writing about hypotheses as well as theories."

That may well be, but "writing about hypotheses" is not the same thing as misrepresenting actual science.  Which is what an article from last week by physicist Paul Davies, called "Life's Secret Ingredient: A Radical Theory About What Makes Things Alive" did, resulting in a lot of bad language and repeated face palms from yours truly.

Okay, let's look at the reasonable stuff first.  It is honestly not simple to determine what we mean by "a living thing;" the various characteristics of life all have exceptions that are clearly considered living by most people (for example, the characteristic of "able to reproduce" is not found in hybrids like mules, and viruses are exceptions to just about the entire list).  The article is basically a long summary of Davies's new book The Demon in the Machine, wherein he proposes that what makes something alive is not the "one or more cells, uses energy, responds to its environment," etc. that you learned in high school biology, but the presence of complex information.

In an interview with The Guardian, Davies explains more fully:


The basic hypothesis is this.  We have fundamental laws of information that bring life into being from an incoherent mish-mash of chemicals.  The remarkable properties we associate with life are not going to come about by accident...  When you look at a living system, the way information is managed is very far from random.  It will show patterns that could lead us to a definition of life.  We talk about informational hallmarks and these might be used to identify life wherever we look for it in the universe.

So far so good.  An interesting idea -- biological complexity as information.  But then Davies says something that made me shout, "You're a physicist!  You should know better than that!"


The fact is, on our current understanding, life is an enigma.  Most strikingly, its organised, self-sustaining complexity seems to fly in the face of the most sacred law of physics, the second law of thermodynamics, which describes a universal tendency towards decay and disorder.

Life doesn't in any sense "fly in the face" of the Second Law.  The Second Law of Thermodynamics describes what happens in a closed system -- a system in which neither energy nor matter crosses the boundaries.  Your organized, self-sustaining complexity would break down pretty damn fast if I turned you into a closed system.  The fact is, what the Second Law says is that you can decrease entropy locally and temporarily if you meet two conditions: (1) there is a constant input of energy, and (2) the entropy decrease in the system is exceeded by the entropy increase somewhere else.  For example, you have grown from a simple single cell into a highly complex multicellular organism by having a continuous input of energy from your food, but your extraction of that energy has disordered those food molecules completely -- far more than any increase in order in your body.

I may seem to be overreacting, here, but this is one of the most common things I see on sites devoted to pseudoscientific "proof" that evolution is incorrect.  The creation of ordered living things from a disorderly primordial soup, they say, is prohibited by the Second Law, so requires an Intelligent Designer.  It's the same misunderstanding; complex macromolecules, and later cells, could be formed abiotically because there's a continuous energy source (the Sun).  Turn that off, and things grind to a halt fast. 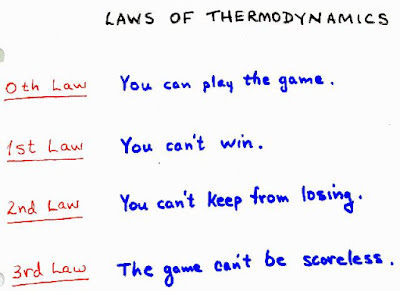 So my frustration here is that someone who is a trained scientist and an internationally-known writer should not be misrepresenting scientific law.  Especially this one; the First and Second Laws of Thermodynamics are some of the most extensively tested models in all of science, and there has never been a single exception found to either one.  This is why patent applications for perpetual motion machines are thrown away by the United States Patent Office without review.

The Laws of Thermodynamics are strictly enforced in all jurisdictions.

Anyhow, that's today's annoyed rant.  I probably should lighten up, or at least direct my ire toward other more deserving targets.  Heaven knows there are enough of them in our own government.  But really, if you can't count on the scientists to represent things correctly, who can you count on?