The "what colors do you see in this photograph?" thing is back with us, only instead of a dress, this time it's a shoe. 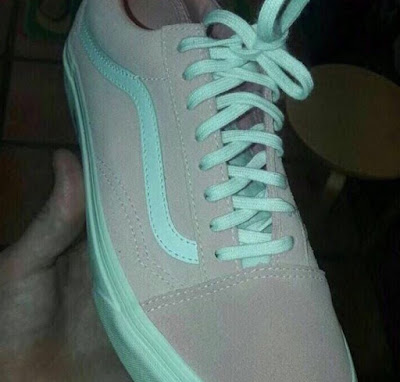 Personally, I see this shoe as gray and a sort of turquoise-greenish-blue, but apparently there are people who see it as pink and white.  What's certain is that once you see it a particular way, you can't somehow see it the other way, as you can with flip-flop illusions like the famous duck and rabbit.

What's different about the claims floating around this time is that supposedly, the fact that I see it as gray and green means I'm a left-brain, logical, sequential, concrete type, and the people who see it as pink and white are right-brain creative, holistic, abstract thinkers.  The problem with this is that a 2017 study at the University of Utah concluded that there is nothing to the right-vs.-left brain dichotomy, at least insofar as personality is concerned.  "It is certainly the case that some people have more methodical, logical cognitive styles, and others more uninhibited, spontaneous style," said Jeffrey Anderson, a neuroscientist who co-authored the study.  "This has nothing to do on any level with the different functions of the [brain's] left and right hemisphere."

It is true that people do tend to have a dominant side of the brain, and this can influence you physically -- for example, what hand you write with and which eye is dominant.  I know on brain-dominance tests I tend to score right in the middle -- left on some tasks, right on others.  When I was in kindergarten I switched which hand I wrote with about a dozen times, till my frustrated teacher told me to simmer down and pick one, for pity's sake, so I ended up right handed.  But I still do a lot of things with my left hand, and probably would be considered mixed-brain dominant.

But the point here is, it has nothing whatsoever to do with my personality, nor with how I perceive color.

The unfortunate part is that this simplistic and inaccurate account of the gray/green vs. pink/white split ignores the fact that we do have a possible explanation for why this happens, and it's actually a good bit more interesting than "you're a right-brained creative type."  The reason seems to be that we evaluate and interpret colors by comparison with their context, not in any sense the "absolute color" of the object (which, as you'll see, is a meaningless concept).  As a rather startling illustration of this, how would you compare the color saturation of the two squares marked A and B in the drawing below? 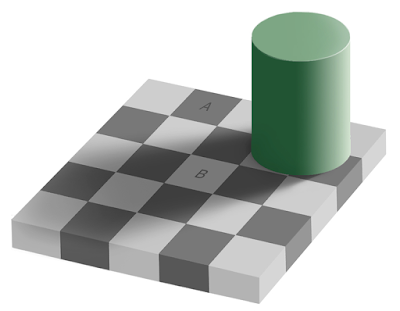 Nearly everyone is absolutely convinced that A is a lot darker than B, but the fact is, they're exactly the same shade of gray.  The reason your brain made the decision that they're different -- a decision that, even once you know what's going on, is damn near impossible to shake -- is that you interpret B as if it were in a shadow, so in order to appear the shade it is, it must be inherently lighter.  If A and B were observed in the same level of light (your brain says), B would have to be lighter.

Even more striking is the image below: 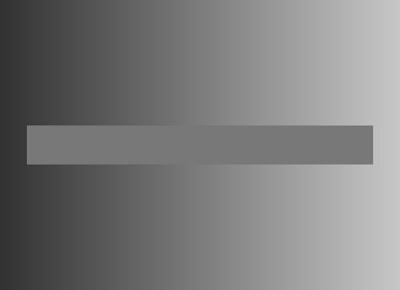 I'm sure you've already figured out that the band in the middle is all the same shade of gray -- which you can prove to yourself by blocking out the background with a piece of paper.  But as I said, once your brain has made the decision that it's a gradient, it's impossible to compromise.

You do the same thing with colors.  Here's an example -- and once again, A, B, and C are all exactly the same color: 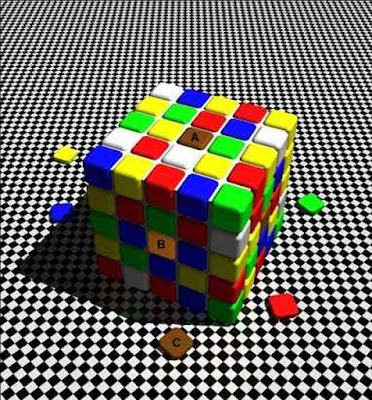 You get the point.  The thing is, you're doing this all the time without being aware of it, and once you have settled on what you're seeing, your brain won't admit it's wrong.  The same is happening with the shoes.  You decide which part of the image to compare the color to, and interpret every other color in the image on the basis of that decision.

We still don't know why some people settle on gray/green and others on pink/white.  But it has nothing to do with which side of the brain is dominant, nor whether you're creative or logical.  It has to do with our faulty method for integrating the data coming from our eyes.  It works well enough most of the time, sure; but when it fails, it fails spectacularly.

So feel free to repost the shoe pic and ask your friends which they see, but kindly don't attribute any differences to your favored side of the brain.  Instead, think about what's really going on here -- which, honestly, is far more interesting.