The classic example of a case where this seemingly impossible task was accomplished is the (rightly) celebrated decipherment of the Linear B script of Crete by Alice Kober and Michael Ventris.  Earlier attempts had incorrectly identified it as being Etruscan, Phoenician, an early Celtic language, Basque, or Hittite.  It was only when Kober meticulously catalogued symbols which frequently appeared together at the end of words that she determined that the script was the written form of an archaic dialect of Mycenaean Greek -- opening the way for her and Ventris to decipher the entire text.

So: not easy, but a tempting job for a dedicated linguist.  This is why people have been working for years on the celebrated Voynich Manuscript, a fifteenth-century illustrated text with an unknown orthography.  Only with the Voynich Manuscript, there was the additional possibility of its being a hoax -- random symbols spelling out gibberish.

The latter possibility is supported by the fact that some of the "words" in the manuscript appear three or more times in a row -- and that the distribution of symbols within words is strange.  Gonzalo Rubio, professor of ancient languages at Pennsylvania State University, said, "[T]he things we know as 'grammatical markers' – things that occur commonly at the beginning or end of words, such as 's' or 'd' in our language, and that are used to express grammar, never appear in the middle of 'words' in the Voynich manuscript.  That's unheard of for any Indo-European, Hungarian or Finnish language."  There's also an unusually high occurrence of words that differ by only one letter -- another feature that is highly odd.  Such characteristics, said cryptanalyst Elizebeth Friedman, means that any attempts to decode it are "doomed to frustration."

This hasn't stopped people from trying, though.  Like the early guesses about Linear B, Voynich has provoked some strange hypotheses -- that it represented Chinese, a dialect of northern German, Latin, English, a synthetic/constructed language (like Klingon and Elvish), or that it was a true code where only certain symbols carried meaning (such as codes where the first letter in each word spells out a message).  None of these has panned out, and a lot of linguists have declared the manuscript untranslatable. 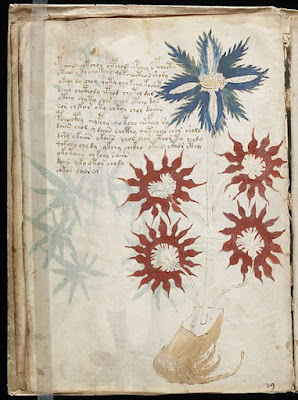 Which still hasn't stopped people from trying.  And just two weeks ago, a paper showed up in the journal Romance Studies which claims that a linguist named David Cheshire at the University of Bristol has cracked the Voynich Manuscript -- and that it's written in a language he calls "proto-Romance" that is somewhere between Church Latin and Italian.

Of course, this got a lot of linguists pretty stirred up.  One of the chief complaints -- one which I had myself when I read the paper -- is that he gives no explanation of how he arrived at his answer, only that "the solution was found by employing an innovative and independent technique of thought experiment."

Myself, I find that unconvincing.  To return to the Linear B decipherment, rightly considered to be the gold standard for such undertakings, Kober and Ventris had a strong and detailed argument for why the order and distribution of the symbols supported the hypothesis that the language it represented was Mycenaean Greek.  The attitude in the scientific world, in every field, is that if you want your claim to be believed, you need to present not only your data and your conclusions, but a cogent argument of how you got from one to the other.  Here, we have nothing more to go on but Cheshire's claim of an "innovative technique" and his end result, the sound/symbol correspondence.

Some linguists were a lot more blunt than I'm being.  Lisa Fagin Davis, executive director of the Medieval Academy of America, tweeted a response to Cheshire's paper, "Sorry, folks, 'proto-Romance language' is not a thing.  This is just more aspirational, circular, self-fulfilling nonsense."  In an article in Ars Technica, she explains in more detail:


As with most would-be Voynich interpreters, the logic of this proposal is circular and aspirational: he starts with a theory about what a particular series of glyphs might mean, usually because of the word’s proximity to an image that he believes he can interpret.  He then investigates any number of medieval Romance-language dictionaries until he finds a word that seems to suit his theory.  Then he argues that because he has found a Romance-language word that fits his hypothesis, his hypothesis must be right.  His “translations” from what is essentially gibberish, an amalgam of multiple languages, are themselves aspirational rather than being actual translations.

After the criticisms began to appear, the University of Bristol walked back their support of Cheshire, stating, "Following media coverage, concerns have been raised about the validity of this research from academics in the fields of linguistics and medieval studies. …  The research was entirely the author’s own work and is not affiliated with the University of Bristol, the school of arts nor the Centre for Medieval Studies."

Which is pretty harsh.  Cheshire, of course, is not backing down, and says he'll be vindicated.  And after all, that's how science works.  Someone proposes a model to explain some set of data, throws the model out there to his/her colleagues, and lets the feeding frenzy begin.  Those models that bear up to peer review, replication, and deep analysis are supported, and ones that don't are thrown out.

My guess is that this will turn out to be the latest in a long list of unsuccessful attempts to decipher one of the oddest artifacts from the Middle Ages, but who knows?  Maybe Cheshire will turn out to have hit the bullseye.  After all, people didn't believe Kober and Ventris at first.  And if he's right, it'll be a coup -- and provide us with an answer to one of the most persistent enigmas in linguistics.