New from the "Not Poe's Law" Department, we have: some evangelical Christians who are concerned that demons are now "legally allowed to be" in Denver, Colorado.

I'm not making this up, but I wish I was.  Christian Post, which is usually marginally sane even if virulently anti-LGBTQ, posted a piece last week by Brandon Showalter that expressed concern for the legalization of "magic mushrooms" in the city.  And the problem, Showalter says, isn't just over what people might do when they're high; it's that this makes it legal for demons to get in:


The city of Denver is set to decriminalize psychedelic mushrooms, a move a former drug addict says is opening the city up to demonic activity, just as it does in the life of a drug user...  Seattle-area restaurant manager Shannon Twogood, who is the incoming president of the ministry Hope for Addiction and Dependencies (HAD) in Gig Harbor, Washington, believes that the spiritual ramifications that come with the use of potent drugs are often absent in discussions about legalization...  Policies like what will likely be implemented in Colorado may help a few people but it fails to consider the larger picture for the community, and the social ills that are invited in as a result which will require cleaning up later, she stressed, adding that culture cannot open doors for the demonic realm under the guise of "care" for anything.

The Greek word for sorcery in the Bible is "pharmakeia," from which the word pharmacy is derived.

When Twogood learned that, it transformed how she saw drug use, particularly given how occult practices and witchcraft often involve the smoking of illicit substances or using them to make teas and potions that cause hallucination.

She now teaches in prisons and centers for recovering addicts that it is important to understand that they are operating in the courtroom of heaven, that God is the judge and Jesus is our intercessor and advocate.  Until the sin of drug use is repented from, the demons are legally allowed to be there through the open door of drug use.

Well, first of all, let's clear up the etymological issue.  Yes, φάρμακον can mean "poison" or "enchanted potion."  The problem is, it also means "medicine," "drug," and "dye."  Implying that pharmaceuticals are somehow evil because the word root once meant "magic spell" is as idiotic as thinking that someone left-handed is sinister.  (Yes, that's actually the root of the word "sinister."  And, as much as it pains me to admit it, there are people who say we should avoid medications because pharmacies are literally sorcery -- based solely on the fact that they share a common etymology.) 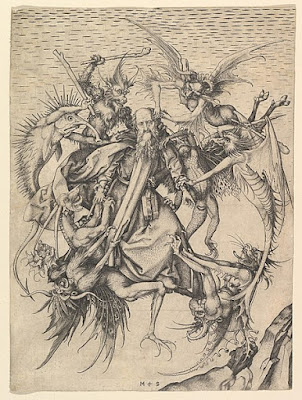 The Temptation of Saint Anthony (Martin Schöngauer, ca. 1485) [Image is in the Public Domain]

But what puzzles me most about Showalter's article is the whole thing about demons being legally allowed to enter Denver.  Since when do demons care about laws?  Aren't they demons because they don't give a shit about sinning and breaking rules and so on?


Lucifer:  Ha ha!  We shall enter Milwaukee and possess its inhabitants!  They shall suffer the fires of hell!

Beelzebub:  Um, boss?  We can't do that.  Milwaukee has a strict no-demon policy.

Lucifer:  Dammit!  I hate it when that happens!  Perhaps we should attack Denver instead.

Beelzebub:  No problem there.

In all seriousness, there's a piece of this that pisses me right off, and that's the implication that all illegal drugs are equally bad.  This is especially egregious in this case, because psilocybin -- the active ingredient in "magic mushrooms" -- has shown tremendous promise in ameliorating treatment-resistant depression.  As a person who has suffered from depression my whole adult life, and for whom medication and therapy have had equivocal results at best, I would take psilocybin in a heartbeat.  The idea that these people are adding yet another layer to peel back before the medical establishment will be able to use this chemical to help people for whom nothing else has worked is profoundly infuriating.

But there you have it.  The legalization of drugs and/or demons.  It's getting so I can't tell the actual websites these people create and the ones that are parodies.  Or maybe that's just the legal demons clouding my mind.  You can see how that could happen.