The nature/nurture debate has been going on for some time -- whether our behavior and personalities are controlled by our genetics or our environment.  Most scientists believe it's both -- the differences lie in what amount and which parts of our personalities are due to each factor.

The search for answers has led to some rather startling results.  Separated-twin studies -- involving locating sets of identical twins who were separated at birth and raised in different homes -- resulted in some correspondences that were astonishing.  The weirdest one, done back in 1979, found a pair of identical twin brothers who were separated at age four weeks and didn't even know of each other's existence -- and they were both named Jim, drove the same type of car, both had tension headaches and were chronic nail-biters, were both firefighters, and chain-smoked the same brand of cigarettes.

Now, even the most die-hard proponent of the personality-is-inborn explanation wouldn't claim that the kind of car you drive is genetic.  Some of these similarities are clearly due to the Law of Large Numbers -- in a big enough sample size, you'll find strange coincidences that don't really mean anything profound.  Add to that Dart-Thrower's Bias -- our tendency to notice and remember outliers -- and the Two Jims aren't really that hard to explain.  (And, of course, out of the thousands of pairs of twins studied, the media is going to point out the one that is the oddest.)

But still.  Consider some of the other similarities.  While cigarette brand choice is certainly not genetic, addictive behaviors have an inheritable component.  So does anxiety, which accounts for the headaches and the nail-biting.  And to be a firefighter, you have to have physical strength, courage, and an ability to take risks -- all features of personality that could well have an origin in our DNA.

Last week, a paper appeared in Scientific Reports that supports a strange conjecture -- that dog ownership is partly genetic.  The research, which came out of Uppsala University (Sweden), looked at the concordance rates of dog ownership between identical twins (which share 100% of their DNA) and fraternal twins (which share, on average, half of their DNA).  And the data were clear; the concordance between identical twins is far higher, supporting a large degree of heritability for dog ownership.

"We were surprised to see that a person's genetic make-up appears to be a significant influence in whether they own a dog," said Tove Fall, professor of medical epidemiology and lead author of the study.  "As such, these findings have major implications in several different fields related to understanding dog-human interaction throughout history and in modern times.  Although dogs and other pets are common household members across the globe, little is known how they impact our daily life and health.  Perhaps some people have a higher innate propensity to care for a pet than others." 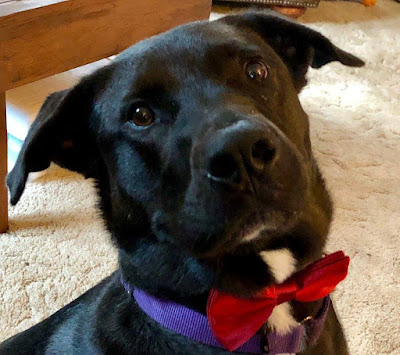 "The study has major implications for understanding the deep and enigmatic history of dog domestication" said Keith Dobney, Chair of Human Palaeoecology in the Department of Archaeology, Classics and Egyptology at the University of Liverpool, who co-authored the study.  "Decades of archaeological research have helped us construct a better picture of where and when dogs entered into the human world, but modern and ancient genetic data are now allowing us to directly explore why and how."

My sense of why I have dogs is that I've somehow become convinced that my house just isn't filthy enough.  The entryway from our back yard was once off-white linoleum, but years of tracking by various dogs we've owned has left it way more off than white.  And I'm assuming the indoor-outdoor carpeting in our basement has been tan all along, but who knows?

Of course, we own dogs for more than just the random carpet stains and pieces of dismembered squirrel.  They're sweet, cuddly, love to play, and have a boundless enthusiasm for enjoying life that I can only aspire to.  Every time we lose one -- inevitable, given their shorter life span -- it leaves me grieving for months.  And while I've sometimes contemplated not replacing them when they're gone, within the year I'm already perusing PetFinder looking for another rescue puppy to give a home.

Unsurprisingly, given the Fall et al. study, my parents were also major dog lovers.  My dad had a little terrier named Max whom he adopted while working for the post office as a letter carrier.  He had a walking route, and Max would meet him every morning and follow him the entire way.  My dad started bringing snacks for him, and eventually Max's owners said, "You know, we don't have time for him anyway, would you like to take Max home?"  My dad agreed -- and his canine pal spent the rest of his life following him around, even after Max had gone complete blind from cataracts.  In fact, Max would walk behind my dad, keeping track of where he was by sound and smell, and when my dad stopped Max would keep going till he bumped into my dad's leg, then stand there, nose pressed against him, until he started walking again.

Anyhow, this gives us a new perspective on dog ownership, and the strange relationship between our genes and our behavior.  But I need to wind this up, because Guinness wants to play ball, and track more mud around the basement.  You know how it goes.