Suppose you were walking in the woods, and suddenly, you stumbled on a root and fell flat on your face.  And while you were lying on your belly, trying to regain your breath and your dignity, you noticed that right in front of your eyes was a twenty-dollar bill that someone had dropped.

You might decide that your bad luck in tripping over a tree root had been cancelled out by the good luck of now being twenty dollars richer.  You might, on the other hand, attribute it to complete chance and the chaotic nature of the universe, where sometimes you win, sometimes you lose, and the whole thing appears to be a big zero-sum game.

What I can almost guarantee you wouldn't do is decide that the money had exerted a magical gravitational attraction toward your face, and had caused you to fall.

I bring this up because of a maddening article in the Kent and Sussex Courier that tells of a fortuitous archaeological discovery in the town of Tunbridge Wells.  Some "scientists," we are told, were poking around Calverley Grounds, a local park, and found a mass burial site (probably a "plague pit" from the bubonic plague epidemic of 1660), and also the site of a skirmish between the Normans and the Saxons.

Cool stuff.  But I haven't told you yet how they found it. 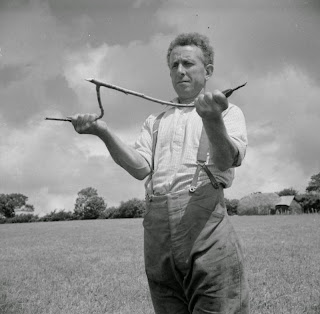 Yes, dowsing, that time-honored tradition of holding metal rods or tree branches in your hands, and imagining that aquifers (or mineral deposits or burial sites or damn near anything) could somehow pull on them and alert you to their presence.  How on earth could that work, you might ask?  Well, an article by Stephen Wagner gives us the following definitive answer:


The quick answer is that no one really knows - not even experienced dowsers. Some theorize there is a psychic connection established between the dowser and the sought object. All things, living and inanimate, the theory suggests, possess an energy force. The dowser, by concentrating on the hidden object, is somehow able to tune in to the energy force or "vibration" of the object which, in turn, forces the dowsing rod or stick to move. The dowsing tool may act as a kind of amplifier or antenna for tuning into the energy.

Righty-o.  An "energy force."  That, strangely, is completely undetectable except to a dude holding a tree branch.

Be that as it may, there is both an American and a British Dowsing Society. People take this stuff seriously.  When I mention dowsing in my Critical Thinking classes -- in the context of its being pseudoscience, and a fine example of the ideomotor effect -- I find that it arouses hostility on almost the level of evolution and climate change.

"My dad hired a dowser when we were trying to find a place to dig our well," I'll be told, "and when we dug where the dowser told us to, we hit water!"

The first issue here is that I live in upstate New York, where it rains every other day, so there's almost nowhere you could dig around here and not hit water sooner or later.  Secondly, it's anecdote vs. data again, because however fortunate you were to find water, repeated controlled studies of people who self-identify as being highly successful dowsers have generated results consistent with random chance.

But back to our intrepid British skeleton-finders.  They have no doubt that their discovery was made because of their little magic rods.  One of the "scientists," Don Hocking, said:


The body is sensitive to magnetic fields and the kinds we respond to in this regard are called diamagnetic fields and paramagnetic fields and the body responds autonomously to the presence of these fields and particularly to discontinuities in fields where you get a step or a change in direction or change in magnitude.  We are the equipment.  The human body is the equipment and it responds and we use something to indicate that the body has responded and in our case we tend to use rods which swing when the body responds to the fields.  Then we mark what we have found and go through the whole process, marking everything as we go and build up a picture of what there may be underneath.

Which might win some kind of award for pseudoscientific mumbo-jumbo.  And if you're curious about what the terms he's using actually mean, check out the Wikipedia article about diamagnetism and paramagnetism, wherein we learn that (1) all materials are diamagnetic, and that it's only a significant force in superconductors, and (2) paramagnetism is so weak that it can "only be measured by a sensitive analytical balance."

But enough with the science-y vocabulary, let's think about the results.  Even Hocking admitted that he was messing about in a part of the world where you pretty much can't stick a shovel in the ground without hitting a medieval grave site:


We found lots of grave sites and we found one mass grave or ‘plague pit’. This is a place where the bodies of those who died of the plague were dumped. I am not sure what plague it was but the main plague was about 1660. It’s not very surprising. There must have been a lot around. The plague took out half the population.

Uh-huh.  So anywhere I dig, I might hit a burial site.  Just like water in upstate New York.  No magic rods required.

I think what bothers me most about this is not that some credulous amateur archaeologists think they're getting mystical information from the Earth, it's that the whole thing was treated seriously by a news outlet.  Woo-woos, after all, will be woo-woos, and they'll continue to play with their Tarot cards and crystal pendulums and metal rods.

But that doesn't mean that we need to give them undeserved credibility by acting if their fantasies are real.