Last week, I did a post about dark matter and dark energy -- and how those could potentially drive a reworking of what we know about physics.  Today, there's another finding that is causing some serious head-scratching amongst the physicists:

The universe may be expanding faster than we thought.  Not by a small amount, either.  The difference amounts to about 9%.  Further, this means that the universe might also be younger than we'd thought -- by almost a billion years.

This rather puzzling conclusion is the result of work by a team led by Adam Riess, of Johns Hopkins University.  At issue here is the Hubble constant, the rate of outward expansion of spacetime.  It's not an easy thing to measure.  The usual method has been to use what are called standard candles, which need a bit of explanation.

The difficulty with accurately measuring the distance to the nearest stars is a problem that's been apparent for several centuries.  If two stars are equally bright as seen from Earth, it may be that they're shining at the same luminosity and are the same distance.  It's more likely, however, that they're actually at different distances, but the brighter one is farther away.  But how could you tell?

For the nearest stars, we can use parallax -- the apparent movement of the star as the Earth revolves around the Sun.  Refinements in this technique have resulted in our ability to measure a parallax shift of 10 microarcseconds -- one ten-millionth of 1/3600th of the apparent circumference of the sky.  This translates to being able to measure distances of up to 10,000 light years this way.

But for astronomical objects that are farther away, parallax doesn't work, so you have to rely on something that tells you the star's intrinsic brightness; then you can use that information to figure out how far away it is.  There are two very common ones used: 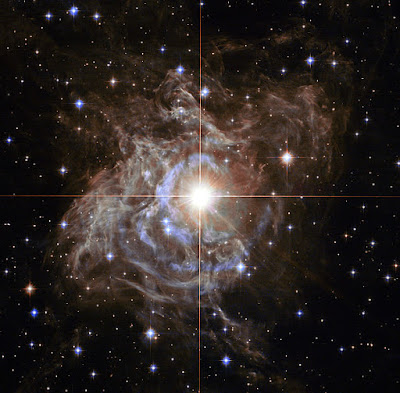 A Cepheid variable [Image is in the Public Domain, courtesy of the Hubble Space Telescope]

So the standard candle method has allowed us to estimate the distances to other galaxies, you can combine that information with its degree of red shift (a measure of how fast it's moving away from us) to estimate the rate of expansion of space.

And here's where the trouble lies.  Previous measurements of the rate of expansion of space, made using information such as the three-degree microwave background radiation, have consistently given the same value for the Hubble constant and the same age of the universe -- 13.7 billion years.  Riess's measurement of standard candles in distant galaxies is also giving a consistent answer... but a different one, on the order of 12.8 billion years.

"It’s looking more and more like we’re going to need something new to explain this," Riess said.

John Cromwell Mather, winner of the 2006 Nobel Prize in Physics, was even more blunt.  "There are only two options," Mather said.  "1. We’re making mistakes we can’t find yet. 2. Nature has something we can’t find yet."

"You need to add something into the universe that we don’t know about,” said Chris Burns, an astrophysicist at the Carnegie Institution for Science.  "That always makes you kind of uneasy."

To say the least.  Throw this in with dark matter and dark energy, and you've got a significant piece of the universe that physicists have not yet explained.  It's understandable that it makes them uneasy, since finding the explanation might well mean that a sizable chunk of our previous understanding was misleading, incomplete, or simply wrong.

But it's exciting.  Gaining insight into previously unexplained phenomena is what science does.  My guess is we're awaiting some astrophysicist having a flash of insight and crafting an answer that will blow us all away, much the way that Einstein's insight -- which we now call the Special Theory of Relativity -- blew us away by reframing the "problem of the constancy of the speed of light."  Who this century's Einstein will be, I have no idea.

But it's certain that whoever it is will overturn our understanding of the universe in some very fundamental ways.