Sometimes there are news stories that I have to feature here simply because they're cool.

This one came from some data collected by a mission called Swarm, consisting of three satellites which were launched in 2013 to study the Earth's magnetic field.  The mission is pretty important -- besides being critical to navigation, the magnetic field of our planet protects us from most of the cosmic particles that strike the upper atmosphere.  And -- somewhat alarmingly -- it appears we may be at the beginning of a geomagnetic pole reversal, when the magnetic field of the Earth flips for reasons still poorly understood.  (We know about 183 such pole reversals in the last 83 million years, which is about as long as we have good data for.  The oddest part is that they are anything but regular.  The shortest duration of a particular polarity was around 400 years -- and we've been in the current one for 780,000 years.)

What the current study looked at is a much more transitory phenomenon called a geomagnetic jerk, which sounds like a derogatory name for a geologist, but isn't.  Actually, it's a sort of hiccup in the magnetic field.  They were first discovered in 1978, when there was a sudden increase in the magnetic field intensity followed by an equally rapid decrease, only lasting a few days.  They can be localized geographically, too; there have been jerks that are measurable in North America and invisible in the magnetic field measured everywhere else.

The new study, released last week in Nature: Geoscience in a paper by Julien Aubert (Université de Paris) and Christopher Finlay (Technical University of Denmark) is called "Geomagnetic Jerks and Rapid Hydromagnetic Waves Focusing at Earth’s Core Surface."  It suggests that what's happening is twofold -- there's a slow convection within our metallic core that, combined with the Earth's rotation, gives rise to the magnetic field on the larger scale; but there are much more rapid, turbulent fluid motions, caused by rising blobs of hot liquid metal.  When those blobs impact the boundary between the outer core and the mantle, it results in shock waves that register on the surface as a jittering of the magnetic flux. 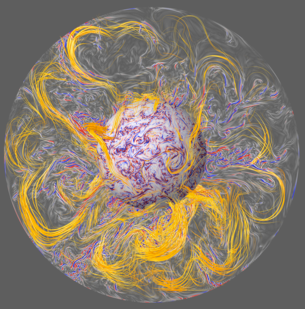 Simulation of the magnetic field within the Earth's core

The weirdest part is that the rising of the blobs (which would make a great title for a horror movie, wouldn't it?) begins a good twenty-five years before it registers on the surface as a jerk.  What process creates the blobs is still not understood, but this is at least a step forward.

"Swarm has made a real contribution to our research, allowing us to make detailed comparisons, in both space and time, with physical theories on the origin of these magnetic jerks," said Christopher Finlay, who co-authored the paper.  "While our findings make fascinating science, there are some real-world benefits of understanding how our magnetic field changes.  Many modern electronic devices such as smart phones, rely on our knowledge of the magnetic field for orientation information.  Being able to better forecast field changes will help with such systems."

All of which makes me wonder, however, how we're going to handle it when the overall magnetic field does its headstand, because the theory is that the field first collapses (or becomes highly erratic) before reforming with the opposite polarity.  I have this strangely hilarious mental image of people with their noses glued to the GPS on their cellphones all heading very efficiently to their destinations, and then suddenly they all start wandering off in random directions, never to be seen again.

Of course, it probably won't be nearly that much fun.

Um, I mean, "catastrophic."  "Catastrophic" is what I meant.

Anyhow, it's nice that we now have another piece of the puzzle as far as what's happening in the core of our planet, which -- as always -- turns out to be far more complex than we realized.  As far as jerks and pole reversals, we'll just have to wait to see what happens and find out if the models hold up under scrutiny.