Two of my biggest interests are genetics and linguistics, so when there's a study that combines the two, it makes my little heart go thumpety-thump.

I found out about a recent one yesterday from a friend and long-time reader of Skeptophilia, and it is a pretty cool intersection between the two fields.  The paper on the research, called "The Arrival of Siberian Ancestry Connecting the Eastern Baltic to Uralic Speakers Further East," was authored by a team led by Lehti Saag of the Department of Evolutionary Biology at the University of Tartu (Estonia), and found that an input of migrants from Siberia into northeastern Europe coincided with the diversification of the Finnic languages (Finnish, Estonian, and Hungarian).  This supports the relationship between the Finnic languages and the Yukaghir languages -- a small family of languages spoken in eastern Siberia. 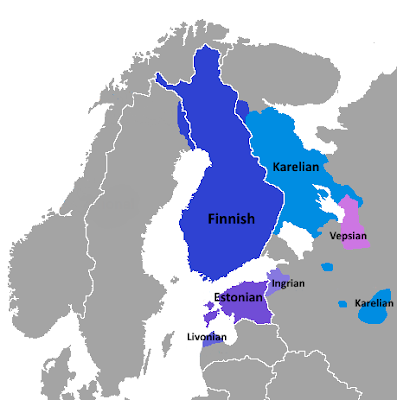 The team came to this conclusion after analyzing the DNA from 33 skeletons dated from 1200 B.C.E. to 1600 C.E., which allowed them to see how the genetics changed due to the infusion of migrants.

What's interesting is when this happened -- the first millennium B.C.E., which is a lot later than I would have expected (not that my opinion means much; my area of linguistic research in graduate school focused on Scandinavian and northern Germanic languages).  The newcomers from Siberia intermarried with the pre-existing western European populations, resulting in today's Finns, Estonians, and Hungarians:


Our findings are consistent with [Bronze-Age Estonia] receiving gene flow from regions with strong Western hunter-gatherer (WHG) affinities and [Iron-Age Estonia] from populations related to modern Siberians.  The latter inference is in accordance with Y chromosome (chrY) distributions in present day populations of the Eastern Baltic, as well as patterns of autosomal variation in the majority of the westernmost Uralic speakers.  This ancestry reached the coasts of the Baltic Sea no later than the mid-first millennium BC; i.e., in the same time window as the diversification of west Uralic (Finnic) languages.  Furthermore, phenotypic traits often associated with modern Northern Europeans, like light eyes, hair, and skin, as well as lactose tolerance, can be traced back to the Bronze Age in the Eastern Baltic.

"Since the transition from Bronze to Iron Age coincides with the diversification and arrival time of Finnic languages in the Eastern Baltic proposed by linguists, it is plausible that the people who brought Siberian ancestry to the region also brought Uralic languages with them," Saag said, in an interview with Science Daily.  "Studying ancient DNA makes it possible to pinpoint the moment in time when the genetic components that we see in modern populations reached the area since, instead of predicting past events based on modern genomes, we are analyzing the DNA of individuals who actually lived in a particular time in the past."

When they merged with the indigenous population, it injected this Siberian DNA signature into a population that already had its own distinct characteristics.  "The Bronze Age individuals from the Eastern Baltic show an increase in hunter-gatherer ancestry compared to Late Neolithic people and also in the frequency of light eyes, hair, and skin and lactose tolerance," said Kristiina Tambets, also of the University of Tartu.  "We see these characteristics continuing amongst present-day northern Europeans."

The coolest thing about this is that a study of DNA extracted from skeletons can shed light on how languages have changed.  I'd love to see this done elsewhere -- especially in places where there are linguistic isolates, which are languages that seem to be unrelated to any other extant languages.  (Examples are Ainu, Basque, Korean, Etruscan, and Vedda.)  These intersections in research have resulted in some fascinating answers to previously unsolved questions -- and show us again that understanding the past is the window to understanding the present.