In Greek mythology, Cassandra was the daughter of King Priam and Queen Hecuba of Troy.  Apollo fell in love (well, fell in lust, actually) with her, and gave her the gift of perfect foreknowledge.  But afterward, Cassandra decided that love affairs with the Greek gods seldom ended well, and told Apollo she wasn't interested.  Apollo was furious, but once a god gives a gift, it can't be revoked, so he just added a clause to it.

She had perfect foreknowledge, but when she told people what was going to happen, no one believed her.  Thus it was that she foresaw the Trojan War and the fact that Troy would be defeated and destroyed -- and instead of taking steps to prevent it, the people of Troy locked her up as a madwoman.

The people who understand climate and ecology are feeling a lot like Cassandra these days.

Now, though, what is being forecast isn't the destruction of a single city, but a trend that is well on its way to triggering a mass extinction.  And we had a study funded by the Smithsonian Institute released last week that highlights the trouble we're in -- a survey of the global climate that extends back five hundred million years.

The temperature data was derived from the ratio of O-16 to O-18 in bubbles of air trapped in ice,  amber, and bound up in calcium carbonate in fossils.  Because water molecules with the lighter isotope evaporate faster and therefore end up in precipitation -- including snowfall -- more readily, air that is enriched in the heavier isotope indicates colder temperature.  This method has been checked against other types of proxy records and shows good agreement, indicating that the technique gives a reliable indication of global average temperature.

If you take a look at the link I posted, you'll see a graph that should be alarming.  The first thing is that we're currently heading toward a frightening benchmark -- a world with no polar ice caps.  The amount of sea level rise this would engender isn't certain, but the current best estimate is about 65 meters, which would be sufficient to inundate every coastal city in the world, not to mention virtually the entire states of Florida, Delaware, and Louisiana and the countries of Belgium, Bangladesh, and the Netherlands. 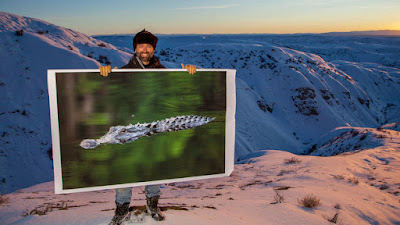 Scott Wing, one of the scientists who led this research.  During the Paleocene-Eocene Thermal Maximum, there were alligators swimming in what are now the Wyoming Badlands.

To quote Paul Voosen, who wrote the article in Science:


Scott Wing and Brian Huber, a paleobotanist and paleontologist, respectively, at the [Smithsonian], wanted to chart swings in Earth's average surface temperature over the past 500 million years or so.  The two researchers also thought a temperature curve could counter climate contrarians' claim that global warming is no concern because Earth was much hotter millions of years ago.  Wing and Huber wanted to show the reality of ancient temperature extremes—and how rapid shifts between them have led to mass extinctions.  Abrupt climate changes, Wing says, "have catastrophic side effects that are really hard to adapt to."

That's putting it mildly.  During the Permian-Triassic Extinction, 95% of the species on Earth died, and the cause was the eruption of the Siberian Traps, which dumped huge amounts of carbon dioxide into the atmosphere, jumping the global average temperature by ten degrees.

So there are two concerns, only one of which people tend to focus on.  There's the actual temperature rise, which is certainly scary enough, but more frightening still is how fast it's happening.  Yes, as climate change deniers will happily tell you, there have been climatic ups and downs throughout Earth's history.  But the one happening now is happening at a rate several orders of magnitude more quickly than anything we have on record.

Of course, this is only the last piece of a mountain of evidence supporting the validity of anthropogenic climate change and the amount of trouble we're in.  Yet still our leaders waffle and cast doubt and talk about expediency and short-term profits and how hard it would be to switch to renewable energy.


And the rest of us keep trying to call attention to the actual science, and are left feeling like Cassandra, knowing that Troy is about to fall but incapable of getting anyone to listen.

The problem is that here, we're not talking about one city's demise, but the long-term habitability of the entire Earth.