Two months ago, an eleven-year-old girl in Argentina was forced to give birth to a baby conceived because she was raped by her grandmother's 65-year-old boyfriend.

The girl was clear she wanted to terminate the pregnancy.  She told her doctors, "I want to remove what the old man put inside me."  But the doctors hemmed and hawed -- lied, even, giving her vitamins alleged to make the fetus develop faster.  In February, she gave birth by caesarian section to a baby that is not expected to survive.  During the procedure, the girl's blood pressure rose to life-threatening levels, requiring emergency treatment, and she nearly died herself.

This is the kind of situation we will ultimately face in Alabama, which this week passed the most stringent abortion restrictions in the United States, signed into law by Governor Kay Ivey.  In fact, by current law, had the Argentinian girl been a citizen of Alabama and gone through with terminating the pregnancy, she and the doctor who performed it would have been punished far more harshly than the rapist who violated her.

Make no mistake here.  This is not about discouraging unwanted pregnancies.  This is about controlling women and restricting their choices.  If elected officials in Alabama were actually concerned about decreasing unwanted pregnancies, they'd mandate comprehensive sex education and increase access to contraceptives, which are two things that have been shown to actually work.  (States with both of those have a lower abortion rate overall, and as access to birth control has become more common worldwide, the overall abortion rate has fallen steadily.)  Instead, what they have now -- abstinence-only sex education and restrictions on contraceptives -- is correlated with a higher rate of teen pregnancy. 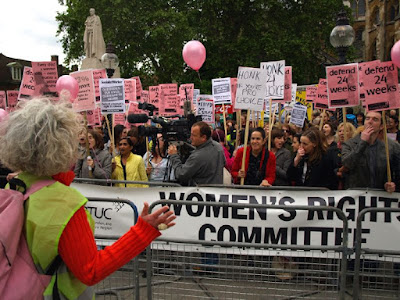 So "pro-life?"  Give me a break.  The attitude in Alabama is that a person's rights begin at conception and end at birth.

Hell, we're giving women less bodily autonomy than we give corpses.  It is illegal to take an organ from a corpse unless the person gave express permission prior to death, even if it would save someone's life.  So once again: this isn't about saving lives.  It's about controlling the choices of women.

And it's not that I'm "pro-abortion."  Come on, really?  No one is "pro-abortion."  Abortion is not something anyone takes lightly.  It is a gut-wrenching decision and often is simply the best of bad choices.  The decision is between a woman and her doctor.  My beliefs or opinions about it have no place in the discussion.  None.

That misrepresentation of what "pro-choice" means has been turbo-charged by the current administration, where Donald Trump once again (surprise!) blatantly lied to stir up his fanatical base by saying that under current rules, babies can be killed at birth.  His exact words:


The baby is born.  The mother meets with the doctor.  They take care of the baby.  They wrap the baby beautifully.  And then the doctor and the mother determine whether or not they will execute the baby.

Which, of course, doesn't happen.  Ever.  The truth is that only 1% of abortions take place after twenty weeks into the pregnancy, and those are almost always because the life of the mother is at risk.  So as usual, we have Trump making shit up as he goes along, and his followers enshrining it as revealed truth.  Because, after all, it's much easier to demonize your opponents if you represent their position as a straw man, especially when the people who support you don't question a single damn thing you say.

And while we're at it: why is there no discussion amongst the legislators in Alabama about penalizing the men who fathered aborted fetuses?  Women can be sent to prison for life, as can their doctors.  The guy who's responsible for the pregnancy?  Nada.

So this is where we are in Alabama.  Also Georgia, Ohio, and (soon) Missouri.  This is, pure and simple, the crafting of law based on religion (which is the impetus for most "pro-life" talking points), with no acknowledgment of the complexity of the issue, of the impact this has on women's autonomy, of what this says to victims of rape and incest.  It's certain to be challenged in the courts, but if it makes its way to the Supreme Court, my fear is that it'll stand -- thus the Right's stalwart defense of vehemently anti-choice Brett Kavanaugh.  (Remember Susan Collins's mealy-mouthed support of Kavanaugh, that he wouldn't "overturn established law?"  Yeah.  If you don't think that the emboldened anti-choicers are now going to go after Roe v. Wade, I've got oceanfront property in Nebraska I'd like to sell you.)

I'm going to keep talking, keep writing, keep fighting, but it's taking a toll.  Those of us who object to the rightward lurch this country has taken, which a friend of mine calls "Gileadification," have to stand up and speak.  Loudly.  But we're having to fight this on so many fronts -- the upsurge in white supremacy, the eroding of rights for LGBTQ individuals and minorities, the rampant corruption in the federal government, the warmongering, the blocking by Mitch McConnell and his cronies of any legislation that hints of bipartisanship, and the daily barrage of lies -- and it's exhausting me.  I'm not anywhere near giving up, but man, I am seriously ready for some good news for a change.