Missives from the sixth dimension

Generally speaking, there are two things that rapidly identify a claim as the work of a crank: (1) saying that it explains everything; and (2) saying that it overturns all previous theories and models in one fell swoop.

Now, that's not to say there haven't been ideas that have blown away previous theories.  The heliocentric model of the Solar System, the germ theory of disease, Darwinian natural selection, genes and the role of DNA in heredity, Newtonian physics, quantum mechanics, James Clerk Maxwell's theories on electricity and magnetism, plate tectonics, relativity -- all of them were earthshattering, and caused a complete revision of what we thought we knew.

But you know what stands out about them?  How rare they are.  There might be a handful of others I've missed, but if you just count the ones I've named, from the earliest (the Copernican heliocentric model) in about 1520 to today, that's nine honest-to-goodness scientific revolutions in five hundred years.

Also, given the precision of our instruments and the rigor with which science is approached -- itself a relatively new thing -- the likelihood of our having missed something major that will "rewrite the textbooks" is pretty low.  (There may be one exception -- incorporating "dark matter" and "dark energy" into our model for physics.  There's a fair chance that when they're figured out -- or, as I speculated in a recent post, are the impetus for a revision of our current model -- we might see a revolution of no less magnitude than Einstein's General Theory of Relativity.  Of course, it's also possible that we'll account for them by physics we already know about.  Which it'll be, only time will tell.)

My point is, if there is an overturning of current scientific models, it's likely the anomalous data and its explanation will come from within the realm of science, not from a layperson waving his or her hands around.  And it will be a rare, headline-making event.

So the fact that there are hundreds of websites that claim to outline some major flaw in a current scientific model, and propose a solution to it, means that most likely all of them are wrong.  (As a commenter put on one of them I saw a while back, "Here are your next steps: (1) Write this up as a formal academic paper.  (2) Submit to peer review.  (3) Collect Nobel Prize.  After you've done all that, come back and we'll talk.")

Most of these sites, therefore, are ringing the changes on the same crazy claims.  But every once in a while there'll be one that is so out there, so bizarre, that it has merit simply on the basis of how creative it is and how earnest its creator seems to be.  Which is why today I'm going to tell you about:  Mosheh's Unifying Field Theory.  Which, as he points out right in the title, is not only a Unifying Field Theory, it's a God Theory.

I encourage you to visit the website, because there's no way I can excerpt enough here to give you the full experience, but here's one sentence so you can get the flavor:

And I just have to include one of the illustrations, which are amazing: 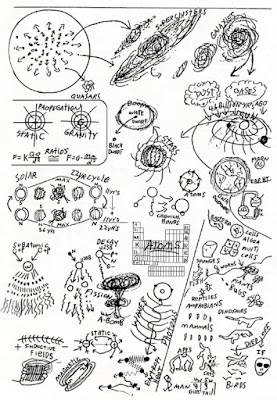 My favorite part is in the lower right corner, wherein we learn that dinosaurs evidently evolved not only into birds but into "Grey Aliens."

There are so many other delightful features of this website that I don't want to spoil them, so you'll just have to go there and take a look.  I think my favorite part is under the "General Theory Outline" page, wherein he draws four-, five-, and six-dimensional objects.  If only the mathematicians had realized years ago that it was this easy!

So Mosheh's "dimensional field theory" is so wacky as to be kind of charming.  He's a crank, yes; he's wrong, almost certainly; but you have to admire his creativity and chutzpah.  As for me, I'm going to go back and poke around some more, and see if I can figure out what he means by saying that "an object's four-dimensional spin is made up of time and something."