With all of the anxiety over what's happening in the government, panic about climate change and its role in the horrible weather we've had lately, and crises of various kinds all around the world, I'm sure what you're all thinking is, "Yes, but what about all the monster sightings?"

Just as I mentioned last week with UFOs, it seems like cryptid sightings are on the rise.  First, let's look at a huge winged creature that was spotted in New Boston, Michigan (near Detroit), and reported to the Singular Fortean Society:

I have seen the winged creature. Location is near New Boston, Michigan.  About 25 miles southwest of Detroit.  I was driving to work at 3:10 am the Sunday before Thanksgiving 2018. I was going east on Sibley Rd.  All of a sudden this black winged creature comes up from the ditch on the right side of the road and takes off straight up.  No flapping.  Wing span looked to be 10 ft.  It had a smooth leather look on the wings.  I didn’t see a face because it happened so quick and I was focused on how big the wings were.  This happened in a matter of 3 seconds and then it was gone.  I tried to wrap my mind around what I just saw.  Also the location was near 2 metro parks.  If you google map New Boston and zoom into Sibley Rd and I-275 then scroll east and that was my path I was driving.  And questions or additional information please text me first because I don’t answer numbers I don’t know.

The individual left her phone number (obviously), but when a member of the SFS contacted her, she didn't answer -- and has steadfastly refused to respond to messages left for her inquiring about further information.

Apparently, Michiganders have been seeing a lot of winged cryptids lately (collectively called "Mothmen" after the seminal tale from West Virginia that gave rise to the phenomenally weird book The Mothman Prophecies, by John Keel, which has nothing whatsoever to do with prophecies and appears to have been written by free association.)  The SFS article linked above, by Tobias Wayland, gives more information:


[Sightings] generally take place in the evening or at night, often in or near a park, and around water.  Witnesses consistently describe a large, gray or black, bat or bird-like creature—although in a small number of cases the creature was described as insect-like—sometimes with glowing or reflective red, yellow, or orange eyes, and humanoid features such as arms and legs are often reported.  Some witnesses have reported feeling intense fear and an aura of evil emanating from the creature they encountered.

Speaking of monsters near water, next we have a group in British Columbia which is trying to locate a cryptid a bit like a sea-going version of Nessie, called "Cadborosaurus."

When I first saw "Cadborosaurus," my first thought was that it must be a cryptid that hatches from chocolate candy eggs, but it turns out it's named for Cadboro Bay, on the southern tip of Vancouver Island.  A group called the British Columbia Scientific Cryptozoology Club is hot on Cadborosaurus's trail, and says that the animal they're looking for is "between thirty and seventy feet long" and has a "head like a horse."  Which you'd think would be hard to miss.

The BCSCC, however, admits that the evidence thus far is pretty tenuous.  "The only [actual remains] we’ve ever had possession of, including the 1937 Naden Harbour, Haida Gwaii carcass, has [sic] tended to look more mammal even though it’s rather serpentine in aspect," said John Kirk, BCSCC's founder.  "Cadborosaurus is a generic title that applies to all of them, but in recent years we’ve felt the mammal type found at Naden Harbour is what we’re going to call Cadborosaurus because it by far matches the description of the majority of witnesses."

Despite the previous lack of success in finding this beast, the members of BCSCC aren't giving up.  "We don’t want to prove this to anybody except for our own personal satisfaction, to ensure they are catalogued and their habitats are conserved," Kirk said.  "We certainly wouldn’t want the Cadborosaurus species to die off."

Last, we have a student named Sophie Jones at the Chicago Art Institute who is regretting choosing a project that involved making "Wanted, Dead or Alive" posters for various cryptids, and posting them all over -- along with her phone number.  She did it with the best of motives, she said, only intending for people to find it amusing.  "Being in a fine arts environment, a lot of the art you see is very heavy duty and painful or traumatic or political," Jones said.  "I wanted to do something that felt accessible and fun and friendly and engaged with an interest that I found really fascinating." 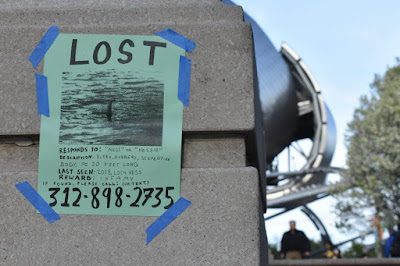 Predictably, a lot of the calls she got were tongue-in-cheek.  She even got one from someone claiming to be Mothman, but asking her out on a date.  (She politely declined.)  But some of the calls, Jones said, were serious, from people who really believe they've seen something otherworldly.  "I didn’t really ever consider that [the posters] would get noticed," she said.  "I didn’t expect that people would be seeing Mothman all over the city, for some reason."

She's tried to respond to the serious ones with helpful suggestions.  "I just don’t think the story should end there — you see a poster, you text it, no one responds," she said.  "That’s kind of a bummer.  They were so interested and willing to participate that I didn’t want to let them down."

So there you have it.  Mothman in Detroit, dinosaurs in Canada, and a well-meaning cryptid collector in Chicago.  The unfortunate part is now that I'm done here, I guess it's back to reality.  Which means reading the news.  And lately, my desire to stay well-informed has been at odds with my desire to stay sane.  All things considered, I'll stick with the monsters.