In this week's installment of Research I Can Get Behind, we have: some scientists who have figured out why bubble cascades happen in a pint of Guinness.

Being a big fan of the classic Irish dark brew, I've wondered the same thing myself.  When a pint is poured, a good bartender will make sure the patron doesn't drink the beer until it's settled for a minute or two.  This has afforded me the opportunity to observe a very strange thing; the bubbles in Guinness seem to sink rather than float.  I'd always figured that this was an optical illusion of some kind, since the beer definitely clarifies from the bottom upward (and the foam forms at the top), but it's a pretty persistent illusion, so that's where I left it.

Probably also because immediately after considering the question, I have a pint of beer to drink and thus more pressing matters to occupy me. 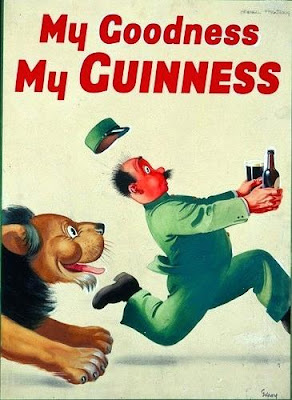 But according to Tomoaki Watamura, Fumiya Iwatsubo, and Kazuyasu Sugiyama of Osaka University, and Kenichiro Yamamoto, Yuko Yotsumoto, and Takashi Shiono of the Research Laboratory for Beverage Technology (of Yokohama), the bubbles really are sinking.  The authors write:


Following Archimedes’ principle, bubbles in liquid generally rise because of the gas-liquid density difference.  Despite the natural rising behaviour of bubbles, after pouring Guinness beer in a pint glass, the bubbles can be observed to descend.  At the same moment, a vast number of small bubbles with a mean diameter of 50 μm (only 1/10 the size of those in Budweiser or champagne) disperse throughout the entire glass.

The downward motion was explained through convection and drag:


Curiously, although creamy bubbles have been served in Guinness beer for more than half a century, the mystery of such a cascading motion of bubbles has been debated in terms of fluid dynamics ever since.  Because the black colour of Guinness obstructs the physical observation in a glass, computational simulations have been a valuable tool to understand the bubble distribution and motion.  The computational investigation has concluded that when Guinness is poured into a typical pint glass, which widens towards its top, the rising motion of bubbles creates a clear-fluid (bubble-free) film above the inclined wall.  The dense clear-fluid film falls, whereas the bubble-rich bulk rises, which is known as the Boycott effect.  Accordingly, we can observe the descending bubbles entrained into the downward flow in Guinness, which is seemingly paradoxical in light of Archimedes’ principle.

Then they got interested in how the "texture" of the beer appeared to move downward in waves, which couldn't be explained by the bubbles simply being dragged along by downward fluid flow.  They attribute it to roll-wave instability -- the same principle that creates the pulses of rainwater sheeting down a window during a rainstorm.  I have to say that at this point I got lost in the technical details -- despite my bachelor's degree in physics, my comprehension of the mathematics of fluid flow is virtually nil -- so if you want more information, you'll just have to check the paper out for yourself.

Who knew that beer could be that complicated?

But one other thing came out of the study that I found fascinating, and that is that they discovered the optimal tilt angle for pouring a pint -- fifteen degrees from vertical, including the curvature of the glass.  Which probably explains why I have a difficult time pouring a pint without it ending up 90% foam and 10% beer, and having to sit around waiting for twenty minutes while the whole thing simmers down before I can drink it.

So that's our scientific research for today.  Consider that the next time you think that scientists don't know how to have fun.  It's kind of cool to know why the sinking-bubble thing happens, although I'm sure my comprehension of the Watamura et al. paper was rudimentary at best.  Or maybe I should just do my own empirical research.  Nothing like hands-on experimentation.

If you see me tonight at the pub, that's what's going on.