The path to acceptance

Lately, it's been mighty hard to stay upbeat.  Insularity, fear, intolerance, and suspicion have ruled the day, along with their inevitable outcomes -- racism, homophobia, and other forms of bigotry.

Even so, I've always been optimistic about humanity in general.  Yes, we're capable of some horrifying actions, but there are just as many (or more) cases where people acted with astonishing selflessness.  We're a complex species, and we often don't respond the way you'd think -- in fact, sometimes we even surprise ourselves.

What a lot of social scientists would like to know is how to decrease the former and increase the latter.  And new research in Proceedings of the National Academy of Sciences, by Miguel R. Ramos, Matthew R. Bennett, Douglas S. Massey, and Miles Hewstone, supports a contention I've had for years; that it's very hard to stay prejudiced against a group when you start interacting with members of the group. 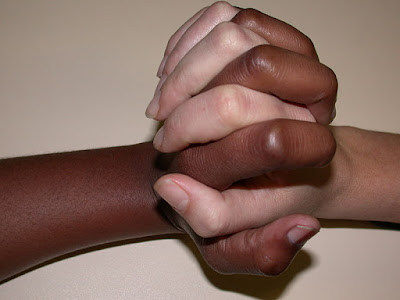 [Image licensed under the Creative Commons Frerieke from The Hague, The Netherlands, Diversity and Unity, CC BY 2.0]

In a paper published last week called "Humans Adapt to Social Diversity Over Time," Ramos et al. describe an interesting tendency.  Faced with changes to what had been a homogeneous population, through immigration or a change in the acknowledgment of a group (as in LGBTQ individuals coming out), initially there's resistance, but over time the original population responds by adjusting and becoming more accepting overall.


Humans have evolved cognitive processes favoring homogeneity, stability, and structure.  These processes are, however, incompatible with a socially diverse world, raising wide academic and political concern about the future of modern societies.  With data comprising 22 [years] of religious diversity worldwide, we show across multiple surveys that humans are inclined to react negatively to threats to homogeneity (i.e., changes in diversity are associated with lower self-reported quality of life, explained by a decrease in trust in others) in the short term.  However, these negative outcomes are compensated in the long term by the beneficial influence of intergroup contact, which alleviates initial negative influences.  This research advances knowledge that can foster peaceful coexistence in a new era defined by globalization and a socially diverse future.


In other words, bigotry can be cured.  I know more than one case of a family where one of the individuals was seriously homophobic -- until someone they're close to came out.  At that point, the bigoted individual has to adjust those negative stereotypes to what (s)he knows of the person (s)he loves and has known for years.  It's hard to hate someone once you recognize their common humanity, when you see they laugh, love, hurt, and bleed just like you do.

Of course, it can go the other way.  There are all too many cases of bigotry that has survived contact with members of the disparaged group, of coworkers and neighbors and family members who have still been targeted, of becoming victims of people they've known for years.  But the hopeful message of the Ramos et al. paper is that this reaction is far less common than an increase in acceptance, trust, and understanding.

It's easy to focus on the negative, and certainly the media encourages that.  Outrage increases readership, and (let's face it) there's still a lot to be outraged about.  But this research gives us a way to combat those tendencies for humans to be insular, suspicious, and prejudiced.  And it also is a hopeful note for our own society, which is becoming more heterogeneous whether we want it to or not.  What Ramos et al. suggests is that we can expect to see some growing pains -- of the sort that is exemplified by our current leadership -- but that over time, we will come to accept, and even appreciate, our diversity, to look upon it as a strength rather than as a threat.