A face in the underpass

As part of my research for Skeptophilia, I spend way too much time perusing questionable websites.

Not that kind of questionable.  Get your mind out of the gutter.  I'm talking about fringe-y sites dealing with Bigfoot, and UFOs, and hauntings, and paranormal phenomena of all sorts.  One of the most useful -- from the standpoint of someone who needs material for six blog posts a week -- is The Anomalist, which acts as a news aggregate for the World of the Weird.  (To his credit, the guy who runs The Anomalist is a pretty good skeptic, and unhesitatingly calls out ridiculous claims for what they are.  He's inclined to give some of them more credence than I would, but I admire his commitment to applying at least some of the tools of skeptical logic to claims of the paranormal.)

One of the links that popped up on The Anomalist last week came from Coast to Coast with George Noory.  Coast to Coast became prominent under the late Art Bell, who interviewed hundreds -- possibly thousands -- of people on the topic of the supernatural, conspiracy theories, and so on.  One of the most famous is the so-called "Frantic Caller" who back in 1998 phoned in to the show and proceeded to tell a fantastic story -- that he was a worker in Area 51 and had found out stuff he shouldn't have, and now the government was chasing him with the intent to silence him permanently.  The guy was either telling the truth or was a hell of an actor -- he legitimately sounded terrified.  (Interesting side note: the transmission from Coast to Coast cut out in the middle of the call, and Art Bell acted genuinely baffled as to why.  The whole thing has become a famous story amongst the conspiracy theorists, lo unto this very day.)

Anyhow, I was on The Anomalist, looking for ideas, and I saw one from Coast to Coast about people seeing a spooky face in a pedestrian underpass.  These sorts of things are almost always cases of pareidolia -- the tendency of the human mind to pick up face-like patterns in things like coarse-grained wood, rust patches, and grilled-cheese sandwiches.  But I thought I'd take a look, and when I did, the first thing I noticed was not a face -- in fact, I'm having a hard time seeing a face in the clip even when I look for it -- but that the underpass looked awfully familiar to me.

Then, with a sudden shock, I realized that it was a photo from the Cayuga Waterfront Trail, only ten miles from where I live.

I've often complained about the fact that things like UFO and Bigfoot sightings never happen near enough to me to justify a road trip.  So when I found out how close I was to the mysterious face, I thought, "Oh, hell yes.  I'm gonna check this one out myself."

So on Saturday I drove down to Cass Park, just north of the underpass in question, and struck off toward it.  I arrived there and started snapping photographs and poking around the place -- and for the record, I didn't see anything even remotely facelike. 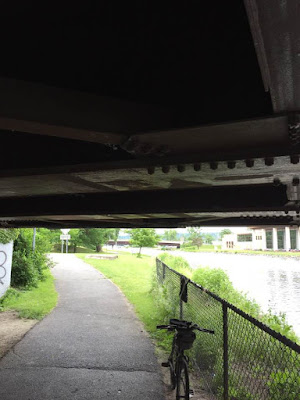 After about five minutes of this, I was startled by a voice nearby, and turned to see an obviously stoned guy sitting on the rocks with his back against the cement buttresses of the underpass.  The following conversation ensued:

Stoned guy:  Dude.  Why are you taking pictures of that?

Me:  Because people have been seeing a face up in the I-beams.  I read about it, and thought I'd take a look.

*long pause to let that settle in.*

Me:  I don't see anything, though.  Have you seen anything weird down here?

Stoned guy:  No, man.  Not a face, anyhow.  But why are you interested in this?

Me:  I'm a paranormal researcher.  [Yes, I got this phrase out without laughing.]

Me:  I've been interested in the paranormal for years.  [That much at least was true.]  When I found out this was happening close by, I figured I'd better check it out.

Stoned guy:  [suddenly brightening up]  Dude, I haven't seen any faces, but there is some creepy fuckin' graffiti over there.  *points* 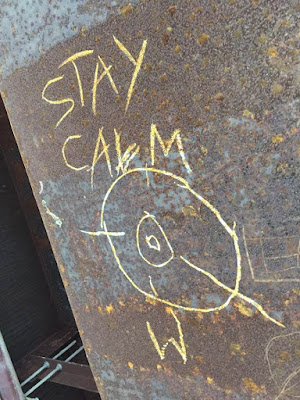 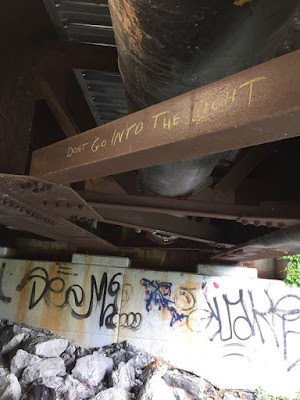 I was immediately reminded of the graffiti saying, "Duck, Sally Sparrow!  Duck NOW!" from the brilliant Dr. Who episode "Blink."  So I thought I'd ask the Stoned Guy what he thought.

Stoned guy:  No idea, man.  All I know is if I see any weird lights, I'm hauling ass right out of here.

Me:  That sounds like a good idea.  Thanks for your help.

Stoned guy:  Rock on, dude.  Hope you catch a fuckin' ghost, or whatever.

So my first opportunity to investigate an actual paranormal claim near where I live kind of was a bust.  Unfortunate, but I suppose it's to be expected.

But it was kind of fun to go check out some place local, and I hope it's not the last.  I'm hereby putting in my request to any aliens, Bigfoots, ghosts, and such-like who may be reading this that I would be much obliged if they'd make an appearance somewhere in, say, a twenty-mile radius of my house.  Because I may be a paranormal researcher, but I also like staying close to home.