All my life I've had a fascination for masks and tattoos.

I think the reason is that both of them simultaneously adorn and hide the body.  They're both revealing and concealing.  You can use them to express yourself -- but at the same time, they cover up some part of you, make it secret, inaccessible.

I've collected masks for years, and whenever I travel, I try to bring home a new one.  The result is that a number of the walls in our house are festooned with masks of various origins -- Ecuador, Iceland, Spain, Belize, Alaska, Thailand...  My oldest one is from Côte d'Ivoire, made in around 1880, that my parents got me for my 30th birthday.  It's pretty unusual, not only for its age, but its design -- from the front, it's a human face, and from the side, it's a lizard. 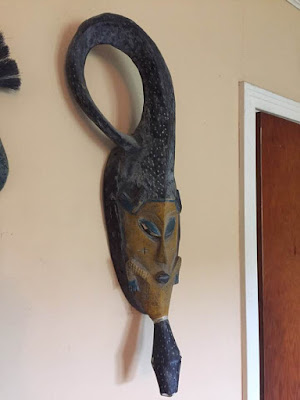 Lately I've taken advantage of the recent purchase of a kiln by making masks out of clay.  We've only had the kiln for a couple of months, so I have a lot in process, but (thus far) only two finished. 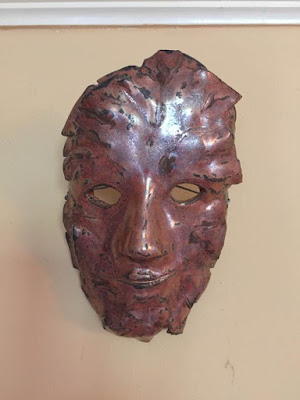 This all comes up because of the recent discovery of ceremonial masks in England that are eleven thousand years old.  So the human fascination with masks goes back a ways.  Discovered at the Star Carr Mesolithic Site, eight kilometers south of Scarborough in North Yorkshire, the masks -- thirty-three of them in all -- are made from red deer skulls with drilled eyeholes.  Here's one of them: 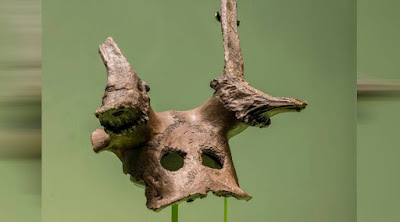 "It’s here that archaeologists have found the remains of the oldest house in Britain, exotic jewelry and mysterious headdresses," says exhibition curator Dr. Jody Joy.  "This was a time before farming, before pottery, before metalworking – but the people who made their homes there returned to the same place for hundreds of years."

The exact use of the masks is, of course, lost in the shadows of prehistory.  The guess is that based upon cultures that still make such artifacts, they're ceremonial in nature, probably used by priests to represent gods or tutelary animal spirits, but there's no way to confirm or refute that. 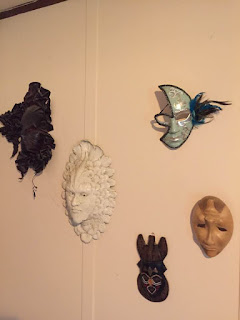 One wall of my office

What's certain is that they're haunting and evocative.  Having any relics of humanity from eleven millennia ago is remarkable; finding ones that were worn, and were evidently a significant part of the culture at the time, is nothing short of amazing.  It leaves me wondering what drive humans have to make such objects, to create adornments that in some ways hide what the wearer is in favor of an alternate identity.  Wherever it comes from -- the Star Carr discoveries show that we've been doing this for a very, very long time.