I recently re-read John McPhee's wonderful quartet of books on geology, Basin and Range, Rising from the Plains, In Suspect Terrain, and Assembling California.  His lucid prose and capacity for focusing on the human stories connected with the subject while teaching us some fascinating science brought me back to these books, which I first read perhaps twenty years ago.

The first two, in particular, describe something that is quite surprising -- or at least was to me when I first learned about it.  The biggest mountain range in the United States, the Rockies, is actually quite poorly understood, and contains some features that are still yet to be satisfactorily explained.  A good part of the Rocky Mountain range is non-volcanic, and although there are some areas that have igneous rocks the vast majority is made up of sedimentary and metamorphosed sedimentary rock -- sandstone, limestone, shale, slate, quartzite, and marble.  Even some of the igneous rocks only show at the surface because the overlayment of sedimentary rock that once was present has eroded away. 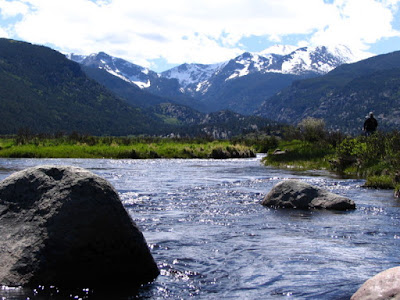 As McPhee describes it, the current thought is that most of what is west of Colorado and Wyoming is probably the result of accretion -- the huge North American Plate overriding smaller plates to the west and gathering up microcontinents and island arcs they carried, cementing them onto the coastline.  It's certain that this is how California formed -- the boundaries between the different "suspect terranes" (the alternate spelling is used when referring to these chunks of land that end up in a very different place from where they were formed) are pretty well established.  Also, the subduction process that brought them to North America is still ongoing, as the small Explorer, Juan de Fuca, and Gorda Plates (in order from north to south) are pulled underneath -- giving rise to the Cascade Volcanoes such as Mount Lassen, Mount Hood, Mount Rainier, and Mount Saint Helens.

We got another piece added to the puzzle with a paper this week in Nature, out of the University of Alberta, by Yunfeng Chen, Yu Jeffrey Gu, Claire A. Currie, Stephen T. Johnston, Shu-Huei Hung, Andrew J. Schaeffer, and Pascal Audet.  Entitled, "Seismic Evidence for a Mantle Suture and Implications for the Origin of the Canadian Cordillera," the paper describes research that found a sharp boundary in the mantle of the Earth between the "craton" -- the central, oldest piece of the North American continent, encompassing what is now the Midwest -- and a long, narrow microcontinent that slammed into the North American Plate as a primordial sea closed -- moving the coastline hundreds of miles further west.

"This research provides new evidence that the Canadian section of this mountain range was formed by two continents colliding," said Jeffrey Gu, professor in the Department of Physics and co-author on the study, in an interview with Science Daily.  "The proposed mechanism for mountain building may not apply to other parts of the Rocky Mountains due to highly variable boundary geometries and characteristics from north to south."

The cool part is that the research was done by looking deep into the Earth's mantle -- not just by studying the surface features.  And this collision, which is estimated to have occurred a hundred million years ago, has left a scar that is still detectable.  "This study highlights how deep Earth images from geophysical methods can help us to understand the evolution of mountains, one of the most magnificent processes of plate tectonics observed at the Earth's surface," said study co-author Yunfeng Chen.

And this technique could be applied elsewhere, as the Rockies are far from the only mountain range in the world that were created by accretion rather than volcanism.  (The obvious examples are the Alps and the Himalayas -- the latter of which are still rising as the Indian Plate continues to plow into the Eurasian Plate.)  "There are other mountain belts around the world where a similar model may apply," said Claire Currie, associate professor of physics and co-author on the study.  "Our data could be important for understanding mountain belts elsewhere, as well as building our understanding of the evolution of western North America."

So we're piecing together the picture of how the Rockies formed -- ironic, as they seem to have been assembled from pieces themselves.  In the process, we're learning more about the processes that move the tectonic plates, and create the landscape we see around us.  It reminds me of the haunting lines from Alfred, Lord Tennyson, which seem like a fitting way to end:

O Earth, what changes hast thou seen?
There where the long road roars has been
The stillness of the central sea;
The hills are shadows, and they flow
From form to form, and nothing stands,
They melt like mists, the solid lands,
Like clouds, they shape themselves, and go.