The more we find out about how the universe works, the weirder it gets.

We've come a long way from Isaac Newton's vision of a mechanistic "clockwork cosmos" -- where everything is governed by a handful of simple mathematical laws, and where if you knew the mass, velocity, and acceleration of every particle in the universe, you could backtrack that knowledge and find out everything that had happened in the past, or extrapolate it and figure out everything that will happen in the future.  The one-two punch of relativity and quantum mechanics put paid to that idea; because of phenomena like nonlocality, entanglement, quantum indeterminacy, and the Heisenberg Uncertainty Principle, it turns out that this isn't even theoretically possible.

But the weirdness doesn't end there, and every time it looks like we're getting closer to a Theory of Everything, after which all that'll be left is filling in the details, we find something else that doesn't fit with what we know, that requires us to modify our understanding.  The latest is the discovery of dark matter and dark energy, which together far outweigh the mass of the entire universe's collection of ordinary matter and energy by a significant margin.  We don't know what either of those are, how (or if) they interact with ordinary matter other than gravitationally, and what abstruse laws of physics might govern their properties.  In other words, we know virtually nothing about them at all.  All we see is the gravitational pull they exert on the matter around them, like a shadow somehow cast by an otherwise-invisible figure standing near you.

Astrophysicists recently got another piece of the puzzle, and the discovery was presented at last week's annual meeting of the American Astronomical Society.  After analysis of a stream of stars in our own galaxy, astronomer Ana Bonaca of the Harvard-Smithsonian Center for Astrophysics found evidence that its movement had been altered by a "close encounter with a massive and dense perturber" -- meaning that a clump of dark matter swept through it, creating a slingshot effect that altered the stars' trajectories and flung them out of the stream.

The most amazing part is the size and speed of this dark arrow that shot its way through our galaxy.  According to Bonaca's data, the dark matter blob was equivalent to five million solar masses, and was traveling at 800,000 kilometers per hour.  No wonder it disrupted things.  But despite this, Bonaca calls this clump "slow-moving" -- which seems ridiculous until you recall that light travels at 300,000 kilometers per second.  So as fast as Bonaca's stream disrupter was moving, it was still only traveling at 1/1350 of the speed of light.

Bonaca admits that there could have been other causes than dark matter, but still thinks that her explanation is the most plausible.  "Any massive and dense object orbiting in the halo could be the perturber," she said, "so a wandering supermassive black hole is definitely a possibility... The most plausible explanation for the gap-and-spur structure is an encounter with a dark matter substructure, like those predicted to populate galactic halos." 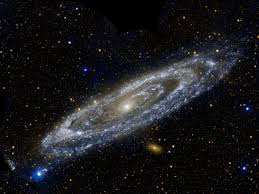 [Image is the Public Domain, courtesy of NASA/JPL]

If true, this indicates a few interesting things -- the first of which is that dark matter interacts with itself strongly enough to form clumps.  What those interactions consist of is completely unknown.  But the coolest thing is how these disruptions in stellar streams could be used as a dark matter telescope -- helping us to "see" what is invisible in every other respect.  most excitingly, these features demonstrate that cold stellar streams are extremely fine-tuned detectors, sensitive at a level that was only hoped for beforehand," Bonaca and her co-authors, David Hogg, Adrian Price-Whelan, and Charlie Conroy, write in a pre-print of their paper.  "In addition to GD-1 [the stellar stream they studied], there are over forty known streams in the Milky Way halo.  In the era of Gaia, we now have both the incentive and the resources to study them all in detail.  With the full network of streams we could learn not only about individual halo substructures, but about the population as a whole."

So this has definitely given the astrophysicists something to chew on.  I still have the feeling that dark matter will turn out to be this century's "luminiferous ether," the hypothesized substance through which light supposedly propagates -- and which was conclusively shown not to exist when Einstein published his paper on the Special Theory of Relativity.  But that's only a hunch, and I'm certainly not an expert.  We'll have to wait to see what the scientists come up with, and whatever that is, I can guarantee it's gonna be interesting.