Many of us engage in magical thinking -- attributing causal relationships between actions and events that are simply (often accidentally) correlated.  Superstitions are magical thinking; as nice as it would be if you could influence the win/loss ratio of your favorite team by wearing a particular shirt, the universe just isn't put together that way.

Where it gets interesting is that there are different degrees of magical thinking.  A clever piece of research appeared in the online journal PLoS-One last week, carried out by psychologists John McCoy of the University of Pennsylvania and Tomer Ullman of Harvard, which illustrates that even those of us who engage in magical thinking seem to be intuitively aware of how impossible different false causations are. 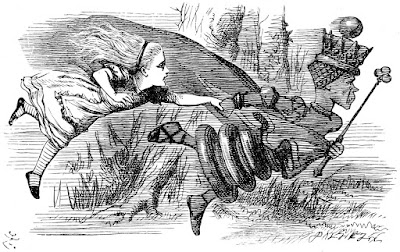 So we can, like the White Queen in Through the Looking Glass, believe in six impossible things before breakfast.  [Image is in the Public Domain]

The paper, entitled "Judgments of Effort for Magical Violations of Intuitive Physics," asks test subjects to perform a simple task.  First, imagine a world where magic is real, where conjuring a spell could make things happen that are impossible in our world.  Then, they were asked to judge how difficult those spells would be.  What the researchers found is that the bigger the violation of physics required for the spell to work, the greater the effort by the conjurer must be.  The authors write:


People spend much of their time in imaginary worlds, and have beliefs about the events that are likely in those worlds, and the laws that govern them.  Such beliefs are likely affected by people’s intuitive theories of the real world.  In three studies, people judged the effort required to cast spells that cause physical violations.  People ranked the actions of spells congruently with intuitive physics.  For example, people judge that it requires more effort to conjure up a frog than to levitate it one foot off the ground.  A second study manipulated the target and extent of the spells, and demonstrated with a continuous measure that people are sensitive to this manipulation even between participants. A pre-registered third study replicated the results of Study 2.  These results suggest that people’s intuitive theories partly account for how they think about imaginary worlds.

After all, to levitate a frog using ordinary physics has already been achieved.  Frogs, like humans, are mostly water, and water is diamagnetic -- when exposed to a strong magnetic field, the constituent atoms align, inducing a magnetic field of the opposite polarity and triggering a repulsive force.  So it doesn't take any particular violation of physics to levitate a frog, although imagining a situation where it could be done without a powerful electromagnet is more of a reach.

Conjuring a frog out of nothing, though?  This is a major violation of a great many laws of physics.  First, if you imagine that the frog is coming from the air molecules in the space that it displaces when it appears, you have to believe that somehow oxygen, nitrogen, and the trace gases in the air have been converted to the organic molecules that make up living tissue.  Just getting from lightweight gaseous elements to the iron in the frog's hemoglobin isn't possible in the lab -- iron, in fact, is formed in the cores of supergiant stars, and only dispersed into space during supernova explosions.  (Pretty cool that the molecules that make up you were once in the ultra-hot cores of giant stars, isn't it?  Carl Sagan was spot-on when he said "We are made of star stuff.")

So there are different sorts of impossible.  You'd think that once you've accepted that the regular laws of physics don't apply -- that you're in a world where magic really happens -- you'd decide that all bets are off and anything can happen.  But our intuitive understanding of the laws of physics doesn't go away.  We still are, on some level, aware of what's difficult, what's impossible, and what's ridiculously impossible.  The authors write:


[P]eople’s ranking of the spells in all our studies were not affected by exposure to fantasy and magic in the media.  We suggest that the media does not primarily affect what spells are seen as more difficult, but rather that people bring their intuitive physics to bear when they engage with fiction.  That is, in line with previous research on myths and transformation, systems of magic are perceived as coherent to the extent to which they match people’s intuitive theories.  People perceive levitating a frog as easy not because they know it’s one of the first charms that any young wizard learns at Hogwarts, rather young wizards learn that spell first because readers expect that spell should be easy.

In his 1893 essay The Fantastic Imagination, the novelist George Macdonald wrote, “The natural world has its laws, and no man must interfere with them …but they themselves may suggest laws of other kinds, and man may, if he pleases, invent a little world of his own”. It seems people’s little worlds do not stray far from home.

What's especially interesting to me about this study is that being an author of speculative fiction, tweaking the laws of physics is kind of my stock in trade.  I've messed around with time travel (Lock & Key), alternate/parallel worlds (Sephirot), telepathic, energy-stealing aliens (Lines of Sight), and mythological creatures becoming real (The Fifth Day), to name a few.  It's fascinating to think about my own writing -- and figure out which of the crazy plot points I've invented were impossible, and which were really impossible.

At least it's reassuring that the evil superpowerful shapeshifters in Signal to Noise fall into the latter category.