End of an era

Today is my last day as a classroom teacher.

We still have finals week yet to go, but for all intents and purposes, this is it.  The last day of class.  This year, when I say goodbye to my students, it's really goodbye.

I'm of two minds about retirement, which I suppose is only natural.

First, I've taught biology (and various other subjects) for 32 years, and I am seriously ready to do something different.  While I love my subject -- I still get ridiculously excited when I get to teach genetics and evolutionary biology -- there are parts of it that I will not miss.  Over three decades, and I still haven't figured out how to make The Parts of the Cell interesting.  And while I personally love biochemistry, it doesn't seem to be a Fan Favorite.

And that's putting it mildly.

I also am rather notorious in my school for my antipathy toward Staff Development.  I detest bureaucracy, and the increasing motion in New York -- and, I suspect, elsewhere in the United States -- toward micromanagement and a standardized-tests-über-alles approach to education absolutely infuriates me.  So I won't miss curriculum mapping and high-stakes exams and administrative b-b stackers who don't have the slightest clue what makes teaching vital and relevant and interesting.

But.  I still love the students.  The relationships I've formed over the years have meant a great deal to me, and the trust and interest and friendship the students have shown me are something I value more than I can put into words.  Also, that "Aha!" moment you see in kids' eyes when something finally makes sense, when suddenly some piece of the universe becomes clear to them -- there's nothing like that in the world. 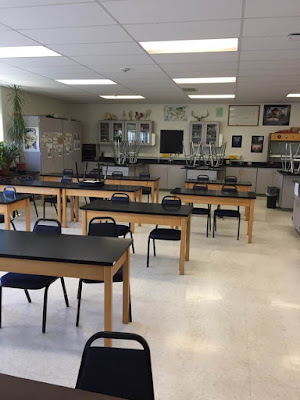 I also have been privileged to work with a truly incomparable staff.  Our school district is very, very lucky, from the leadership on down to the rank-and-filers like myself.  In particular, the science department in our school is made up of incredibly talented, caring, and smart individuals, who have exactly the right attitudes toward education and have been, one and all, a delight to work with.  I'll truly miss the camaraderie. 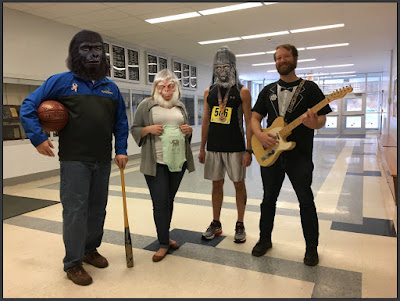 The science department's yearbook photo this year.  We were supposed to include in the photo something that was important to us, and "make it memorable."  We nailed the latter part, at least.

There are also more specific, personal memories that I'll cherish forever.
So all in all, it's been a good run, and retirement was a really hard decision to make.  But it's the right one at the right time.  I've got a lot of things I want to do -- writing, mostly, although I'm sure that a large part of my retirement will be occupied with "let dogs in, let dogs out, let dogs in, let dogs out" -- and I'm content with turning over the reins to a new teacher.  (Really new, in my case.  I know the person who was hired to replace me, and she's a first-year teacher, right out of the starting gate -- and is incredibly talented, dedicated, enthusiastic, and smart.  I have to admit to feeling better about leaving given that I know the students are in good hands.)

So this is it.  In a few hours, the last bell will ring on my teaching career, and that'll be that.  I'm gonna try not to cry, but we'll see how long that determination holds.