One of the most puzzling and fascinating questions in evolutionary biology is what kicked off the Cambrian Explosion.

One striking thing about this event is that it points out how many laypeople have the wrong idea about the progression of evolutionary change.  This view -- perpetuated (unfortunately) by a lot of children's books on prehistoric life -- is that we started out with single-celled organisms, then something like a jellyfish, to something like a worm, to something like a crustacean, and so on and so forth -- until we finally get to humans, who are (of course) the pinnacle and end goal of the whole process.

This is wrong on several counts.

First, evolution is not goal-driven.  It's the law of "whatever works now."  There's no support for the Lamarckian idea of reptiles somehow figuring out that it'd be nice if they could fly, and gradually developing wings.  The evolutionary model shows that when changes occur, they're selected for (or against) by whatever the conditions are at the time.  If those conditions change and what once was an advantage now is a disadvantage, well... sucks to be you.  If the population you belong to has the genetic variation to adapt to the new situation, you might make it as a species.  If not, you'll join the 99% of species on Earth that have vanished entirely.

The second problem that it implies a different length of evolutionary history for each sort of organism -- thus you'll see, sometimes even in otherwise excellent books, sea anemones called "primitive" and octopuses called "advanced."  In fact, sea anemones and octopuses -- and humans -- have precisely the same span of ancestral lineage.  Yes, it's true that in that time, the lineage that led to humans has changed a good bit more; it's also true that we've evolved to be a lot more complex than sea anemones have.  So the words "primitive" and "advanced" have to be used with caution -- because we all trace our ancestry back exactly the same number of years, to a common ancestor some three billion years ago.

Last, and most pertinent to this post, the Cambrian Explosion shows us that the"ladder of creation" view of evolutionary history isn't correct.  The Explosion itself occurred on the order of 541 million years ago, and marks the evolution of most of the major body plans of animals we see today.  So nearly simultaneously, and quite rapidly, the fossil record goes from soft-bodied simple forms to a huge diversity of forms -- early arthropods, proto-vertebrates, mollusks, worms, and echinoderms all appear in a relative flash.

It also generated a few animals we don't see around today -- lineages that left no descendants.  These include Anomalocaris... 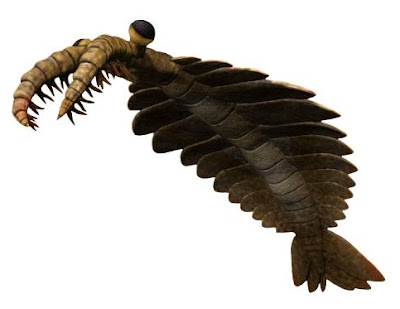 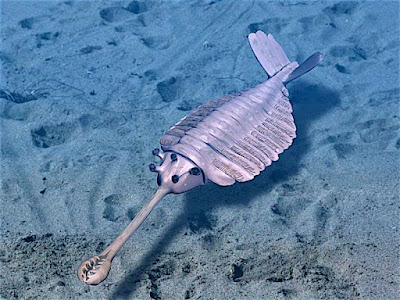 ... and the aptly-named Hallucigenia. 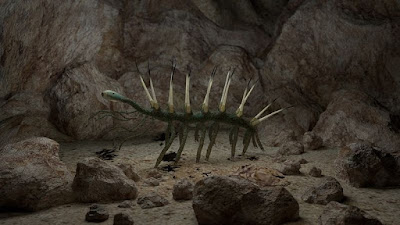 The conventional wisdom for years has been that the development of fossilizable parts -- teeth, spikes, armor plates -- came about because of the evolution of carnivory.  Once carnivores are around, there's a significant pressure to evolve structures either for defense or to become a carnivore yourself.

But a paper released last week, from research done at the University of Exeter, has suggested a different cause -- that the roots of the Cambrian Explosion, and thus the biodiversity we see around us today, happened because of plate tectonics.  Plate movements in the early Cambrian resulted in the formation of island arcs, similar to what we see today in Japan and Indonesia, and the resultant volcanic activity dumped so much carbon dioxide into the air that it warmed the planet and boosted phytoplankton growth -- leading to a spike in oxygen and rapid cycling of nutrients that fueled an explosion of animal diversity.

"Many studies have suggested this was linked to a rise in oxygen levels – but without a clear cause for such a rise, or any attempt to quantify it," said Josh Williams, now a Ph.D. candidate at the University of Edinburgh, who was the lead author of the paper.  "What is particularly compelling about this research is that not only does the model predict a rise in oxygen to levels estimated to be necessary to support the large, mobile, predatory animal life of the Cambrian, but the model predictions also show strong agreement with existing geochemical evidence."

Of course, such a complex event is very unlikely to have only a single cause, but the Williams et al. research may have found the initial trigger for the rapid diversification.  It's fascinating to think that a little over half a billion years ago, an episode of volcanism might have been the impetus to generating the animal body plans we still see around us today.  As science has shown us so many times, the key to understanding the present lies in the past.