Invitation to a haunting

If any loyal readers of Skeptophilia live in Texas -- or are willing to take a road trip -- there's an opportunity for you to do some empirical research and report on your findings here.

The destination is the town of Seguin, in Guadalupe County, in the central part of the state.  Seguin is the home to the Magnolia Hotel, which has been nicknamed "the most haunted spot in Texas."  Unfortunately for us paranormal-investigator types, the Magnolia has been closed for extensive repairs since 2013.  The building itself was built in 1840, and started out as a private home, but after renovation and expansion was turned into a hotel, in which capacity it continued until the mid-20th century.

Eventually, though, wear-and-tear and poor maintenance shut the place down, and it was on the docket to be demolished, but a wealthy family purchased the place and decided to restore it to its 19th-century glory.

This, apparently, did not sit well with the spirit world. 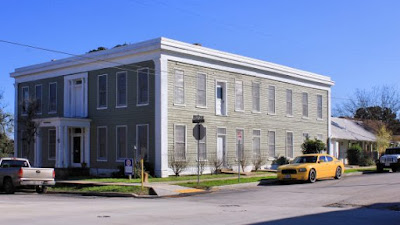 According to the reports, more than one contractor quit after "paranormal activity ramped up."  A psychic was called in, and she found that the place was rife with ghosts, including:
In addition -- if that's not enough -- people have seen faces in mirrors, had doors slam suddenly, heard disembodied footsteps and voices, and seen furniture move on its own.

Enticed?  The hotel is reopening on August 12, and since there are only two guest rooms in the place, it's going to be hard to get on the reservation list if you don't act quickly.

Living in upstate New York, Texas is a bit of a hike for me, but if there are any readers in central Texas who would like to do a little first-hand research, I encourage you to book a night or two.  Bring along a camera, not to mention any other ghost-hunting equipment you may see fit to take with you.  (In fact, there are bunches of apps you can get for cellphones and iPads for detecting electromagnetic field fluctuations, which are supposedly a sign that a ghost is near, or possibly the air conditioner just turned on.)

Let me know if you found anything (or even if you didn't), and in fact, if you're so inclined, you could even write a guest post about your experience here at Skeptophilia.  Yeah, I know the plural of
"anecdote" isn't "data," but I'd still love to hear about anything you might have witnessed.  And if lonely Idella strokes your hair during the night, please accept my apologies, because that's some creepy shit right there.