Being a linguistics geek, I've posted here more than once about odd mysteries in language decipherment that have been tackled in the past, some successfully (the Linear B script of Crete) and some not (the Voynich Manuscript).  So I was pretty tickled to find out about one I'd never heard of before -- the strange inscription found on the beach in Plougastel-Daoulas, a village in Brittany, in northwestern France.

Unlike the two puzzlers I referenced, this one at least has the advantage of being in the Latin alphabet and not in some unfathomable set of characters, for which it's not even known if each symbol stands for a sound, a syllable, or an entire word (or some combination).  So we're starting with a leg up as compared both to Linear B and Voynich.

But that's the only advantage we have.  The language is clearly neither Breton nor French, and the inscription is of uncertain age (although the numbers 1786 and 1787 appear, which could be years -- although I'd hesitate to state that with any assurance). 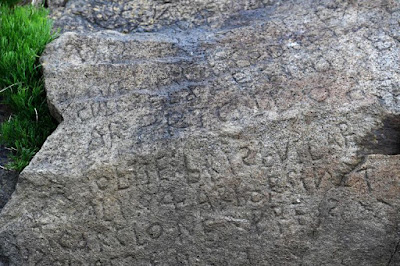 The inscription is quite worn, but part of it says, "ROC AR B … DRE AR GRIO IS EVELOH AR VIRIONES BAOAVEL ... RI OBBIIE: BRISBVILAR ... FROIK ... AL..."  Well, "viriones" looks vaguely Latin to me, but isn't an actual word (although "vir" does mean "man," and at a stretch could be some kind of cognate).  "Eveloh" and "baoavel" are kind of Breton-ish, but the same thing; they aren't actual Breton words.

Not exactly a promising start.

The powers-that-be in Plougastel-Daoulas are offering a 2,000 euro prize for a translation.  If you're inclined to give it a shot, you need to submit your decipherment by November 30, and a committee in the village is going to vote on the one they think is the most plausible.  Not really how linguistic analysis is ideally done -- witness all of the wild guesses made in highly authoritative fashions about Linear B, which was said to be a Celtic dialect, Scythian, Anatolian, Etruscan, and a variety of other languages -- when, in fact, it turned out to be archaic Greek.  (Funny, that, given that inscriptions were found in Greece.)

So I'm not sure how much credence I'd put in the winning entry.  Also, the text is quite short, which invalidates two of the most powerful tools for decipherment -- looking at character frequency, and which characters are likely to precede or follow others.  You need a sufficiently large sample size for that kind of statistical measurement to produce significant results -- and my guess is that the Plougastel-Daoulas inscription is simply too short.

But I encourage anyone interested to try.  After all, Michael Ventris, who with Alice Kober deciphered Linear B, was essentially an amateur linguist -- his day job was architecture.  So a passionate amateur may well have as good a chance as a professor of linguistics.

It's natural to wonder what someone would find important enough to engrave into a rock, and with luck and diligence we'll find out.  Maybe it'll be something fascinating, giving us a lens into the world of the past.  Or maybe -- to quote the Cardassian captain Gul Ocett in the brilliant Star Trek: The Next Generation episode "The Chase" -- "It could just turn out to be a recipe for biscuits."