Conversation between Carol and me a few days ago:


Me:  Honey, I think Guinness is sad.

Carol:  Sad?  What does he have to be sad about?  He spends his whole day sleeping, playing, and eating. 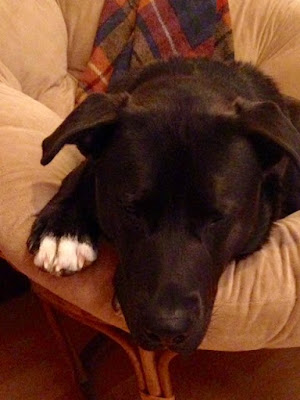 Carol:  That's not sad, he just wants something.

Me:  See?  He needs something.  That's what's making him sad.

Carol:  Is too.  That dog has you wrapped around his little paw.

Turns out, much as I hate to admit it, a piece of research that came out in the Proceedings of the National Academy of Sciences last week suggests that Carol is probably correct.  In "Evolution of Facial Muscle Anatomy in Dogs," by Juliane Kaminski, Bridget M. Waller, Rui Diogo, Adam Hartstone-Rose, and Anne M. Burrows, we learn that since domestication, dogs have experienced significant evolution of one specific set of muscles, as compared to wolves.  The authors write:


Domestication shaped wolves into dogs and transformed both their behavior and their anatomy. Here we show that, in only 33,000 years, domestication transformed the facial muscle anatomy of dogs specifically for facial communication with humans.  Based on dissections of dog and wolf heads, we show that the levator anguli oculi medialis, a muscle responsible for raising the inner eyebrow intensely, is uniformly present in dogs but not in wolves.  Behavioral data, collected from dogs and wolves, show that dogs produce the eyebrow movement significantly more often and with higher intensity than wolves do, with highest-intensity movements produced exclusively by dogs.  Interestingly, this movement increases paedomorphism [retention of juvenile-appearing characteristics] and resembles an expression that humans produce when sad, so its production in dogs may trigger a nurturing response in humans.  We hypothesize that dogs with expressive eyebrows had a selection advantage and that “puppy dog eyes” are the result of selection based on humans’ preferences.

It's not really manipulation, though, unless you call our nurturing reaction toward little children manipulation; we're evolutionarily programmed to nurture our offspring for obvious reasons.  What's interesting is that the nurturing instinct -- our reaction to round faces with large eyes and comparatively small noses, ears, and chins -- has been more or less accidentally transferred to other animals, which is why we ooh and aah over puppies, kittens, bear cubs, and so on.

What's interesting in my case -- and Carol's, too, actually, although she might hesitate to admit it -- is that we have a much stronger positive reaction to puppies than we do to children.  When family friends came over with their six-month-old baby a year ago, and asked me if I wanted to hold the baby, my reaction was:  "Um... sure."  *takes baby*  "Um... hi, baby.  You're cute.  Wow, what a cute baby."  *quickly hands baby back to the parents*

If it'd been a puppy, though?  I'd have been on the floor rolling around with the puppy and completely ignoring our friends, except insofar as to consider how I might successfully steal the puppy without their noticing.  I can't pass a dog on the street without asking the owner if it's okay if I say hi.  And dogs, for their part, seem to take to me immediately.

Kids, though?  Not so much.  Probably a lot of it is that they sense my awkwardness, but for whatever cause, dogs generally like me way more than people do.

So I guess Carol has a point about Guinness's sad look.  He's probably not really sad, he just knows when he uses it, he'll get what he wants.  Now,  y'all'll have to excuse me, because I need to go... um... outside for...  a reason.  Yes, I have a tennis ball in my hand.  That's just a coincidence.   Maybe I'll have some use for it later.  You never know when a tennis ball might come in handy.