When I was young, I had it drilled into me that I was always supposed to do what my mom called "not sinking to their level."  Bullied?  Ignore it.  "Don't react, it's what they want."  Hear gossip about a friend?  Stop listening.  "Don't pay any attention, if you argue it'll just call attention to the gossiper."  Witness prejudice, bigotry, general nastiness?  Walk away.  "You can't change the minds of people like that, you're wasting your effort even to try."

It's taken me over half a century to recognize that for the bullshit it is.

The way this is playing out today is usually couched in calls for "civility."  I hear well-meaning people -- often people I agree with on many points -- mourning the loss of civilized discourse in our society, implying that if we could just have a nice conversation with the bigots, the intolerant, the racists, the homophobes, that would fix everything.

The ultimate conclusion of this line of thought is the claim that we have to "treat all opinions with respect."  Which is not only wrong, it's downright dangerous.  I am under no obligation to treat the opinions of white supremacists with respect.  My moral obligation, in fact, is to shout them down, make sure that they hear loud and clear that they cannot get away with denying someone's rights, safety, or personhood.

The words "respect" and "civility," in fact, have become dogwhistles.  No matter how poisonous the claim, you can't call it out as such, because that would be "disrespectful" or "uncivil."  It's pulled the teeth from our capacity for confronting intolerance and prejudice unequivocally and forcefully, made us question ourselves when in fact we're the ones on the moral high ground, we're the ones who should be able to say, "No.  This is wrong, and I will not let it go by unchallenged."

For example, what do you make of this? 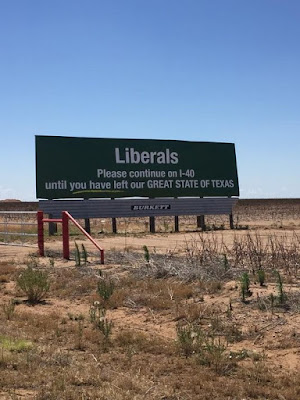 I saw this posted on social media, along with a link about how the negative press it's getting is pushing the company that owns the sign -- Burkett Outdoor Advertising -- to take it down.  But the three times I've seen it, it's always been in a positive light.  "Damn straight," one person wrote.  "You don't like who's running the country, get the fuck out of America."  Another said, "I wish we had one of these in Louisiana."

So what you're saying is that if I disagree with you politically, I have no right to live in the same state as you?  Or, according to the first person, no right even to live in the United States?  Forget civility.  If that's your opinion, go to hell.  And if that response bothers you, causes you to unfriend or unfollow me, or whatever, good riddance.

Then there's Mark Chambers, the mayor of Carbon Hill, Alabama, who posted on Facebook, "We live in a society where homosexuals lecture us on morals, transvestites lecture us on human biology, baby killers lecture us on human rights and socialists lecture us on economics!...  The only way to change it would be to kill the problem out. I know it's bad to say but with out [sic] killing them out there's no way to fix it."

When he began to get backlash, he deleted the post and then lied, denying he'd written it.  (A tactic Donald Trump is finding out doesn't work so well.)  Then he said that, okay, he wrote it, but it didn't mean what it explicitly and obviously meant.  "Although I believe my comment was taken out of context and was not targeting the LGBTQ community," he wrote, "I know that it was wrong to say anyone should be kill [sic]."

This mealy-mouthed non-apology is unacceptable.  Here we have an elected official who has suggested a Final Solution for the "LGBTQ problem."  This should be loudly, forcefully, and repeatedly challenged -- and Mark Chambers should resign.  Now.

Then there's Trump himself, who tweeted the following on the first day of Pride Month:


As we celebrate LGBT Pride Month and recognize the outstanding contributions LGBT people have made to our great Nation, let us also stand in solidarity with the many LGBT people who live in dozens of countries worldwide that punish, imprison, or even execute individuals on the basis of their sexual orientation.  My Administration has launched a global campaign to decriminalize homosexuality and invite all nations to join us in this effort!

No, sorry.  You do not get to undo protections for LGBTQ individuals, allow for discrimination on the basis of sexual orientation in the name of "religious freedom," bar transgender individuals from serving in the military, and even ignore the existence of LGBTQs by refusing to identify them as such on the 2020 census, and then say you're "standing in solidarity."  You do not get to speak at the virulently anti-LGBTQ Values Voters Summit, saying you are "honored and thrilled" to speak at "this incredible gathering of friends, so many friends," and then say that you're "celebrating LGBT Pride Month."  You do not get to claim to be an advocate and still hobnob with vicious homophobes like Franklin Graham, who said:


[LGBTQ protection] is a full-scale assault against Christianity and the followers of Christ.  When prayer is banned from the public square, when our President fails to defend biblically defined marriage, and he openly and zealously advocates for gay rights; when legislators rush to overrule existing laws to promote gay marriage; when schools and courts consistently suppress religious freedoms; we know we are locked in a war against the Christian faith, not culture.  The architect behind this offensive is none other than Satan himself.  The Scripture says that the devil, our archenemy, is bent on as much destruction as possible.

We've tried "civility" with people like this.  Civility doesn't work.  These bigots interpret civility as weakness, and go right ahead hating and discriminating and ridiculing.  The only thing that works is standing up, every damn time, and saying, "No.  Not here.  Not now.  Not on my watch."  Also, always remember that the individuals who are the victims of these people might not be able to speak for themselves -- a lot of them are, quite rightly, afraid to defend themselves.  This means the rest of us have to speak up that much more forcefully.

If this loses me some friends, so be it.  I'm not going to make the mistake I've made for most of my life, of saying "oh, well, you have a right to your opinion," or "I'm not going to argue, it's disrespectful."  A lot of opinions don't deserve respect.  A late realization, and one I wish I'd come to earlier, but we all learn at our own pace.

It'd be nice if we could use a kinder, gentler approach, but as the rise of white supremacy and homophobia and racism in the last three years has shown, staying silent in the face of evil simply doesn't change anything.  So be warned: you can count on me to be an ally for the voiceless, to stand up and say no every time I see injustice, to counter bigotry with steadfastness.  If because of that you want to label me a "social justice warrior," go right ahead.