The power of identity

It's a strange thing, identity.  How we see ourselves, how others see us -- and the parts of us we deny, sometimes even to ourselves.

I'm a writer.  I'm a musician.  I'm a white man of western European descent.  I'm a Louisianian by birth, a New Yorker by choice.  I'm a dog lover.  I'm left of center politically.  I'm a tattoo enthusiast.  I'm a runner even though I've been benched for the last few months from a back injury. I'm a teacher even though I'm soon to retire.  I'm a Francophone even though I haven't spoken French in years and am pretty rusty.

Nevertheless, I'm bisexual and always have been, and always will be.  I first realized it when I was a teenager, and when I went to the public swimming pool I would look at swimsuit-clad girls and go, "Whoa."  And then... had the same reaction when I looked at swimsuit-clad guys.

But I was raised in a traditional, conservative, strictly Roman Catholic family.  At that point, I didn't know the word "bisexual" existed.  Even if I had, I probably would never have admitted it.  I still recall being herded into a room in the church at age fourteen or so -- separated by gender, of course -- and being given "the talk" about sexual morality, wherein I learned that lust was a sin, sex outside of marriage was a sin, and masturbation was a sin.  (At that last statement, the guy next to me leaned over and said, sotto voce, "We're all fucked, aren't we?")

But being turned on by another guy, or worse still, acting on that impulse?  That was a mortal sin.  That was one that you might not get absolution for even if you asked for it.

That was fiery furnace material, dude.

So I squelched that side of me.  Squelched it so completely, in fact, that even when I moved to a much more liberal part of the country (Seattle, Washington), I didn't come out, and would have heatedly denied my orientation had anyone asked.

But in the last few years a few things have cracked my determination to keep that part of me hidden.  First, a few years ago I had a student tell me (apropos of the International Day of Silence), "I guess I can understand homosexuals, but I don't believe anyone can be bisexual.  How can you be attracted to both men and women?"  I did my usual fallback on the science -- bisexuality is well established as a real phenomenon, and isn't just a case of someone not being able to make up his/her mind -- but the kid still said, "I just don't believe it."

And I thought, "She's talking about me.  She's denying that people like me even exist. " 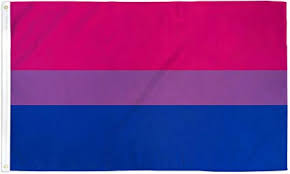 Pride Months came and went.  Coming Out Days came and went.  I still vociferously argued for LGBTQ rights and equality, and still stayed silent about myself.  A few years ago, I came out to a few folks, including my wife (who is a completely amazing person and was entirely cool with it.).  A few selected responses, which should cheer you up about the potential for goodness in humanity:

"No questions, no comments.  Only love."

"Thank you so much for trusting me enough to say this to me.  I know it must have been hard."

"I have no idea why anyone would look at you differently because of this.  You are who you are, and you're a beautiful person.  Kudos for having the courage to speak your truth aloud."

"You have my love and support no matter what.  Nothing has changed that, and nothing will change that."

The funniest one, though, was my dear friend and writing partner, the inimitable Cly Boehs (whose recently-released novel Back Then is a must-read), who smiled and said in her Okie drawl, "Honey, you think I didn't know that?  Every one of your novels has a scene with a gorgeous shirtless man in it."

It took me a good five minutes to stop laughing.  That'll teach me to take myself so damn seriously.

This year, the clamor I've seen about Pride Month has left me feeling angry and hurt -- the demands for a "Straight Pride Parade," the claims that heterosexuals are a persecuted minority, Tomi Lahren's bizarre comment that it's "open season on straight white men."  And the feeling has been rising in me that I couldn't continue to strike back against this sort of bigoted nonsense while still being afraid to admit who I am.

So that has brought me here.

Let me clarify a few things, which (in a sensible world) I shouldn't have to clarify.

First, my coming out as bisexual does not mean anything is going to change between myself and my wife.  This announcement is not a prelude to anything else, merely a statement of what is.

Second, it doesn't mean that I'm looking for a relationship with a guy on the side.  "Bisexual" doesn't mean "unfaithful" or "disloyal."  I'm deeply in love with my wife and would never, will never, betray that.

Last, and listen closely if you have any doubt on this point: this was not a choice I made.  I did not sit back at age fourteen and think, "Let's see... guys, girls?  Guys, girls?  How about... both?"  Wherever sexual orientation comes from, I was built this way.  And as a trans student of mine put it to me, "Why would anyone think that I would choose this?  To face prejudice, ridicule, denial of who I am, on a daily basis?  Who in their right mind would choose that?"

So there you have it.  My only wish is that I'd come out sooner (like, when I realized it as a teenager), rather than denying such a fundamental part of me for decades.  I wish that, not only because of what it would have done for me personally, but because of the role model I would have been for students -- "Look, here's who I am.  You can be who you are, too.  I understand."

But you can't reverse time, nor undo decisions you made in the past; all you can do is act now.  As Maya Angelou put it, "Do the best you can until you know better.  Then when you know better, do better."