A lens on bias

It's astonishing and humbling how hard it is to see bias when you're inside it.

This comes up in matters of privilege.  As a middle-class American white male, I have had conferred upon me privilege so deep that it's a struggle for me even to know it exists.  I have instant, unquestioned entrée to places and situations that would be difficult, if not blocked entirely, if I were a different ethnicity, gender, or nationality.

It's even more unpleasant when you realize how bias colors science.  Because science is supposed to be above that kind of stuff, isn't it?  Objective, rational, logical, and even-handed.  But I ran into an interview in Science a couple of days ago, conducted and written by Kai Kupferschmidt, of German psychologist Daniel Haun of the Max Planck Institute for Evolutionary Anthropology, which referenced a paper Haun and others wrote nine years ago about the bias in psychological studies introduced by the fact that the majority of the test subjects were WEIRD -- Western, educated, industrialized, rich, and democratic.  (The last word is -- hopefully obviously -- being used in its broader sense of "from a country with democratically-elected leaders," not in the sense of belonging to the American Democratic Party.)

This bias colors everything psychological studies have turned up about human behavior, because it takes as a given what's normal, common, and acceptable as "what is normal, common, and acceptable in WEIRD societies."  Haun starts out with an example having to do with ownership -- something most of us pretty much take for granted as obvious to everyone.

"In the #Akhoe Hai//om community in Namibia," Haun says, "who were hunter-gatherers until three generations ago, everything that is shareable in principle belongs as much to you as it belongs to me. I could tell you to give me 'my' shoes, and the fact that you're currently wearing them does not matter.  The natural consequence is that everybody has about similar amounts of everything." 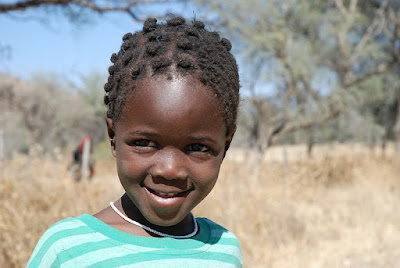 These "givens," of course, turn out to be not so given when you look at other societies.

He follows up with another example from the #Akhoe Hai//om (whom Haun has studied extensively).  "We assume that concepts true in our own cultural context are true generally," he said.  "For example, Marie Schaefer, a former member of my group, led a study on fairness norms. Let's say a friend and I go to the beach and look for shells.  I spend a lot of time searching and find a lot.  He spends his time laying on the beach.  If we divide up the shells, I get a lot more than he will, and that's fair, right?  That's what German children mostly do.  But #Akhoe Hai//om children distribute the goods equally most of the time, no matter who contributed how much.  Everybody has this emotional gut response to being treated 'unfairly.'  But depending on where you grew up, the gut feeling you develop might be completely different."

I recall being in a cultural anthropology class in college and running into this idea the first time.  The professor recounted the interactions between northeastern Native American tribes and Europeans in the early colonial period.  When the Europeans staked out land and said, "This is my land," the Native Americans couldn't even make sense of what they were trying to say.  The concept of land ownership simply didn't exist for them.  The idea you could draw an arbitrary line around a piece of something that had been there long before you arrived and would still be there long after you were dead, and call that piece "mine" in the same sense that you said "this shirt is mine," was so ludicrous as to be laughable.

It wasn't long, of course, before they found out what the implications of the concept of land ownership were -- to their own undoing.

Haun is well aware that studies like his might have the opposite effect of what he intends -- not that cultures (including our own) must be studied on their own terms, but that some cultures are literally better than others.  (And guess whose would probably come out on top?)  Haun says this specter of cultural superiority should not be ignored.  "[It must be dealt with] by confronting it head on," Haun said.  "Scientists can be careful in interpreting their data and engage in the debate.  I don't think racism goes away if we avoid the fact that there is variation as well as similarity across humans.  And the drivers of variation might give us some answers about fundamental questions of who we are and how we work."

I've always thought that the best way to eradicate prejudice is to have people interact with others of different ethnicities, religions, sexual orientations, and nationalities -- that it's hard to remain prejudiced against someone who is smiling and chatting with you over a cup of coffee.  Our country's current determination to pull the cloak of insularity around us will have the opposite effect, further demonizing what the phenomenal science fiction writer Nisi Shawl calls "the other" and making us even blinder to our own biases.  Instead of holing up in our little towns, where everyone thinks and looks like ourselves, we should be going to other countries, seeing our common humanity despite our very real differences.

It puts me in mind of a quote from Mark Twain that seems like as good a place as any to conclude.  "Travel is fatal -- it is fatal to prejudice, bigotry, and narrow-mindedness, and many of our people need it sorely on these accounts.  Broad, wholesome, charitable views of men and things cannot be acquired by vegetating in one little corner of the earth all one's lifetime."