It's always a little startling when something is discovered that ends up explaining... well, damn near everything.

If I exaggerate, it's not by much.  I'm referring to epigenetics, which is the modification of DNA or RNA by chemical changes that don't alter the gene sequence itself.  Usually this is accomplished by adding various "markers" to the strand that then change how it is expressed.  These alterations are at least sometimes inheritable; in 2008, a group of geneticists at Cold Spring Harbor came up with the definition of epigenetics as a "stably heritable phenotype resulting from changes in a chromosome without alterations in the DNA sequence," and that's pretty much the one that still is used today. 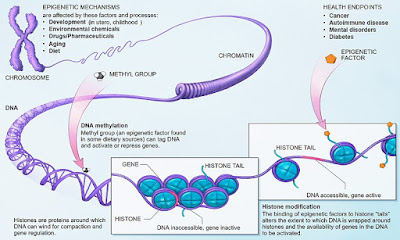 It has led to some pretty startling discoveries.  In a paper in Nature in 2014, geneticist Moshe Szyl showed evidence that mice that were taught (using mild electric shocks) to fear an odor gave birth to offspring that feared the odor as well -- and that heightened fear response lasted for two further generations.  Szyl found that a particular olfactory gene was "demethylated" by the conditioning -- had a marker called a methyl group removed -- and this enhanced the mice's ability to detect the odor, and modified their response to it.  This led to some serious speculation that the children and grandchildren of people who had been through atrocities like the Holocaust might inherit similar enhancements, leading to significant changes in behavior.

If you think this sounds Lamarckian, you're not wrong.  It turns out there is a way to inherit acquired characteristics.  It doesn't work the way Lamarck thought it did, but there was a grain of truth in what the man said.

This comes up because of a paper in Science this week describing evidence that epigenetic marking influences everything from embryonic development to cancer susceptibility to memory formation.  In fact, one such modification -- called m6a -- can do all three depending on which RNA strand it's acting on.  The last one is the most interesting to me; a team led by Chuan He of the University of Chicago found that if you knocked out an enzyme that reads m6a in mice, they have memory defects but are otherwise normal.  They then injected a virus carrying the normal reader gene into the mice -- and the defects went away.

This sounds to me like the basis of as much of a revolution as Mendel's discovery of the gene itself, and the discovery of DNA's structure and function by Rosalind Franklin, Marshall Nirenberg, James Watson, Francis Crick, and Maurice Wilkins.  The idea that a relatively small alteration to our DNA could create inheritable changes without altering the base sequence runs so contrary to both Mendelian inheritance and the "Central Dogma of Molecular Biology" that it looks like it'll force significant revisions to every bit of genetics we thought we understood.

My guess is that they're only beginning to test the depth of this discovery.  "We just need … a lot more knowledge about these things,” He said.  "We need to stay open-minded. The field is still very young."

So maybe I need to change my declaration in yesterday's post that "the twentieth century was [past tense] the century of the gene."  If my intuition is right, we might be on the brink of a whole new chapter -- hell, a whole new textbook -- in our understanding of how genes work.  All of which reiterates something I've believed for years -- that if you're interested in science, you'll never run out of new discoveries to be amazed at.