In a new study from Proceedings of the National Academy of Sciences, we learn something simultaneously fascinating and a little alarming; humanity's fingerprint on the globe is so clear that it can even track our wars, famines, and plagues -- back twenty-five centuries or more.

The whole thing was done using proxy records, which involve using indirect sources of evidence about the past to infer what conditions were like.  A commonly-used one is using the constituents of air bubbles in amber and ice to make inferences about the global average air temperature at the time -- a technique that shows good agreement with the measurements of the same variable using other methods.

Here, in a team effort from the Desert Research Institute, the University of Oxford, the Norwegian Institute for Air Research, the University of Copenhagen, the University of Rochester, and the Alfred Wegener Institute for Polar and Marine Research, researchers studied ice cores from thirteen different locations in the polar northern hemisphere, and found that the levels of one contaminant in the ice -- lead -- was enough to parallel all of the major plagues and wars that occurred in Europe and northern Asia back to 800 B.C. E.

What they found is that lead concentrations in the ice rose when things were quiet and prosperous, probably due to an expansion of smelting operations for items like lead seams for stained-glass windows and impurities in silver ore processing.  The signature of wars was clear, but the signature from plagues was blatantly obvious; the years following the Plague of Justinian (541-542 C.E.) and the two spikes of the Black Death (1349-1352 and 1620-1666 C.E.) were two of the lowest points on the graph.

"Sustained increases in lead pollution during the Early and High Middle Ages (about 800 to 1300 CE), for example, indicate widespread economic growth, particularly in central Europe as new mining areas were discovered in places like the German Harz and Erzgebirge Mountains," said study lead author Joseph McConnell of the Desert Research Institute.  "Lead pollution in the ice core records declined during the Late Middle Ages and Early Modern Period (about 1300 and 1680 C.E.) when plague devastated those regions, however, indicating that economic activity stalled." 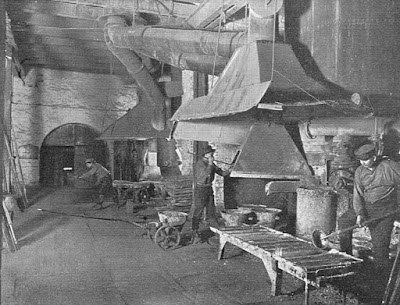 Silver smelting plant in Katowice, Poland, ca. 1910 [Image is in the Public Domain]


Lead pollution in Arctic ice reflects midlatitude emissions from ancient lead–silver mining and smelting.  The few reported measurements have been extrapolated to infer the performance of ancient economies, including comparisons of economic productivity and growth during the Roman Republican and Imperial periods.  These studies were based on sparse sampling and inaccurate dating, limiting understanding of trends and specific linkages.  Here we show, using a precisely dated record of estimated lead emissions between 1100 BCE and 800 CE derived from subannually resolved measurements in Greenland ice and detailed atmospheric transport modeling, that annual European lead emissions closely varied with historical events, including imperial expansion, wars, and major plagues.  Emissions rose coeval with Phoenician expansion, accelerated during expanded Carthaginian and Roman mining primarily in the Iberian Peninsula, and reached a maximum under the Roman Empire.  Emissions fluctuated synchronously with wars and political instability particularly during the Roman Republic, and plunged coincident with two major plagues in the second and third centuries, remaining low for >500 years.  Bullion in silver coinage declined in parallel, reflecting the importance of lead–silver mining in ancient economies.  Our results indicate sustained economic growth during the first two centuries of the Roman Empire, terminated by the second-century Antonine plague.

Of course, there's nowhere in the ice cores that has as high a level of lead contamination as recently-deposited ice does.  "We found an overall 250 to 300-fold increase in Arctic lead pollution from the start of the Middle Ages in 500 CE to 1970s," said Nathan Chellman, a doctoral student at the Desert Research Institute, and co-author on the study.  "Since the passage of pollution abatement policies, including the 1970 Clean Air Act in the United States, lead pollution in Arctic ice has declined more than 80 percent.  Still, lead levels are about 60 times higher today than they were at the beginning of the Middle Ages."

As an aside, the Trump administration has steadily rolled back regulations requiring industry to conform to reasonable pollution standards, including allowable levels of air pollution.  So look for the contaminants in ice -- and in your lungs -- to spiral upward once again.

But hey, it means the economy's good, so nothing to worry about, right?

So as I've pointed out (repeatedly), what we are doing does have a measurable, quantifiable effect on the environment, and studies like McConnell et al. should be a significant wake-up call.  And as I've also pointed out, it probably won't.  It's all too easy for people to say, "Meh, what do I care about a little lead in Arctic ice?  So it bothers a few seals and polar bears.  Too bad for them."  And continue with our throw-away, gas-guzzling, conspicuous-consumption lifestyles.

It's cold comfort knowing that when the aliens come here in a thousand years to find out why the Earth is barren, they'll be able to figure it out by looking at the traces we left behind in the ice, soils, rocks, and air.