The idea of there being a mirror universe has been a staple of science fiction for as long as I can remember.  Many people think immediately of evil Spock with a beard, but my first contact with the idea was when I was seven and first saw the episode of Lost in Space called "The Anti-Matter Man."  The two universes were connected by a creepy, surreal, fog-covered bridge: 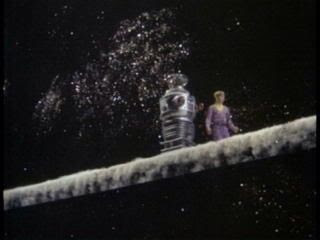 The characters from our universe had duplicates in the other -- evil, of course, with an evil, amoral John Robinson, a trash-talking Robot, and a version of Major Don West who looked like he was an escapee from an institute for the criminally insane.

Oh, and the evil Major West had a beard.  Of course. 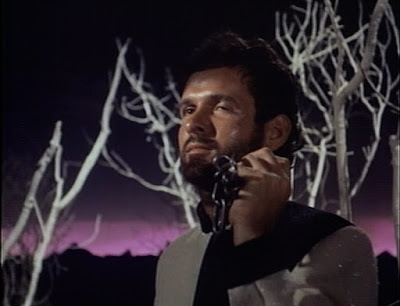 It was definitely one of their more atmospheric and effective episodes.  Not that there was that much competition in that regard, considering that the previous episode, "Castles in Space," featured a cringe-worthy pseudo-Mexican bounty hunter (complete with a sombrero) who is searching for a runaway princess Dr. Smith had set free from a block of ice by covering it with an electric blanket, and said bounty hunter (did I mention he had silver skin?) gets the Robot drunk by pouring tequila onto his circuit boards.

For the record, I didn't make any of that up.

This whole thing comes up because there are some physicists who are trying to demonstrate the existence of a mirror universe -- an unseen parallel reality coexisting with our own -- and that this might explain the mysterious "dark matter" that seems to permeate all of space, but which no one's been able to detect other than by its gravitational signature.

A team led by physicist Leah Broussard has designed an experiment at Oak Ridge National Laboratories to see if she can find evidence of a mirror reality, looking for neutrons that have been transformed into particles with the opposite parity.  In a paper in arXiv, the authors write:


The theory of mirror matter predicts a hidden sector made up of a copy of the Standard Model particles and interactions but with opposite parity.  If mirror matter interacts with ordinary matter, there could be experimentally accessible implications in the form of neutral particle oscillations.  Direct searches for neutron oscillations into mirror neutrons in a controlled magnetic field have previously been performed using ultracold neutrons in storage/disappearance measurements, with some inconclusive results consistent with characteristic oscillation time of τ∼10~s.  Here we describe a proposed disappearance and regeneration experiment in which the neutron oscillates to and from a mirror neutron state.

What Broussard is doing is to fire a beam of electrons past a powerful magnet and into a wall.  If her idea is correct, the collision will cause some of the electrons to transform into their mirror versions, and appear on the other side of the wall.

She got her idea from a peculiarity that has been observed in neutron decay -- that in a beam such as the one Broussard is using, neutrons have an average life that is ten seconds longer than if they're simply at rest in a laboratory.  There's no Standard-Model explanation of why this should be; all neutrons should behave in exactly the same way.  But Broussard says that this discrepancy is exactly what you'd expect if some of the neutrons in the beam are being transformed into their mirror versions -- and then become invisible to ordinary detectors.

Even Broussard admits that the idea is kind of far-fetched, but given that every other effort to elucidate the nature of dark matter -- or even establish its existence beyond its gravitational effects -- has met with zero success, it's worth looking at.

So it'll be interesting to see what turns up.  I can't help but hope that she gets positive results, because it's about time we finally get something concrete about dark matter.  Besides, the idea of there being a mirror universe is pretty cool.  Even if that means we might have to watch out for evil Major West with a beard.