Noises in the basement

A couple of days ago, I was sent a link by a loyal reader of Skeptophilia with the message, "Thought you'd be interested... what do you think of this?"

The link was to a story on Wales Online, about a couple in the town of Ammonford who claims that they've been driven from their house by the sounds of ghostly screams, talking, and banging -- all coming from underneath their basement.

The couple, Christine and Alan Tait, are now living in their camper van because they're afraid to stay in their house.  "It was like a flushing noise that I heard first," Christine Tait said.  "I told Alan about it and that I couldn’t figure out where it was coming from.  He left his phone in the bathroom with the recorder on to try to pick up the source of the noise, and then we could hear a machine running.  We started to record all over the house, and we picked up the sounds of chains, a motorbike starting, and people screaming."

Since then, Alan Tait said, they have heard "a woman screaming, sexual sounds, dogs barking, a printing press running, a motorbike, a car horn honking and what sounds like a police siren," all from beneath their house, which stands on a quiet alleyway. 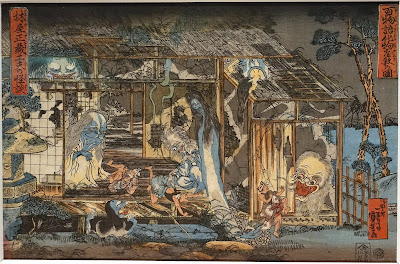 Haunted House by Hayashiya Shozo, early 1800s [Image is in the Public Domain]

On the link is a recording made my Alan Tait that has some of the sounds he claims he captured by dropping a microphone down a 1.5 meter shaft he dug in his basement.  They're pretty creepy, I'll say that -- although, in context, not really much worse than you'd hear in a busy city (and we have only the word of the article's author, Robert Harries, about how quiet the neighborhood is).

So the people at Wales Online sent a team into the house, after Alan Tait said he'd let them go as long as they were aware that he wasn't responsible for anything that happened to them.  They brought in recording equipment, stayed there for hours, and what happened was...

... nothing.  The only thing the recording equipment picked up was the team themselves, moving around as they packed up to leave.

So it sounds a little fishy to me.  I'm always pretty dubious about evil spirits that magically vanish whenever anyone shows up with a skeptical attitude.  I'm reminded of what the character MacPhee says in That Hideous Strength, by C. S. Lewis: "If anything wants Andrew MacPhee to believe in its existence, I’ll be obliged if it will present itself in full daylight, with a sufficient number of witnesses present, and not get shy if you hold up a camera or a thermometer."

There's also the problem that (despite Wales Online's mention of sending out a team to investigate) the whole thing has a sensationalized tabloid feel about it.  I don't know what Wales Online's reliability is, but on a glance it reminds me of trash like The Daily Mail Fail.

Last, my spidey-senses were definitely alerted by the end of the article, where we find out that Alan and Christine Tait were "not prepared to say where in the UK they currently reside and did not want pictures of themselves published in the press," presumably to protect their privacy -- after giving out their names, ages (62), publishing photographs of their house, and stating that they were "travelling around the country handing out posters and fliers about what we think is going on."

So to me, it sounds like a publicity stunt, although (as a dedicated home-body) I have a hard time imagining wanting publicity to the point that you're willing to abandon your house and live out of a camper van.

But that's just me.

So to the reader who sent the link: thanks, but I'm generally unimpressed.  I guess that was a predictable response, but even so, this is one that doesn't add up to me.  Until I start hearing screams, banging, and "sexual sounds" from underneath my own basement, I'm not buying it.

Posted by Gordon Bonnet at 4:57 AM